Comandante Machete: That the government recognizes our elected authorities and not Trujillo Morales! 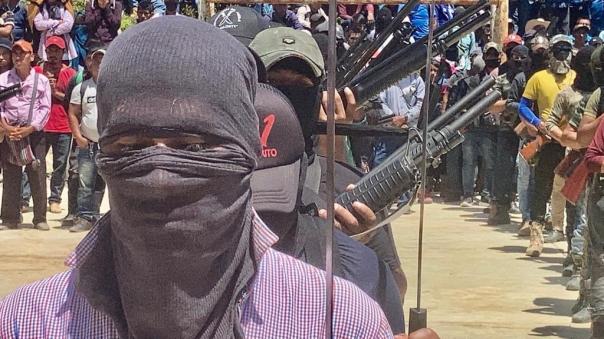 The El Machete Self-Defense group asks the government to recognize its authorities and not Raquel Trujillo Morales Photo: Isaín Mandujano

The El Machete Self-Defense group warned today that if “anything happens to” any of the three councilors of the municipal government of Pantelhó, of the 20 commissioners of the 86 communities or to Father Marcelo Pérez Pérez, we are going to mobilize to reach all “possibilities.”

In a letter signed by Comandante Machete, leader of the Self-Defense group, he said today that the armed group made up of “indigenous soldiers” irrupted publicly last July 7 to confront the Los Herreras organized crime group, which from the municipal seat of Pantelhó under the command of Dayli de los Santos Herrera Gutiérrez, had already left a trail of some 200 dead people.

They did not rise up in arms for partisan political purposes, but rather they did it to put an end to the “criminal group” that from the PRD Municipal Council of Pantelhó, controlled the town’s resources (money), so that in the 86 rural communities support didn’t arrive and therefore they still lack good roads, schools, health centers, safe drinking water, electricity and other public services for the benefit of the population.

Commander Machete recalled that a commission of 20 people was created to represent the 86 communities and different neighborhoods of the municipal seat, and also that the State Congress swore in the three members of the Pantelhó Municipal Council, and that now we all walk together for the reconstruction of the municipality.

And that they won’t let the one who calls himself Mayor Raquel Trujillo Morales enter the municipality, because if he won these were not legitimate elections, since votes were bought and the voters were threatened to vote for the PRD in that municipality via “the hit men of Dayli” group.

They pointed out that neither the three councilors on the municipal council, nor the 20 commissioners from the 86 communities depend on them, and that as an armed group they don’t have to give orders to them; Los Machetes are only “for the protection of the people against the hit men.”

Given the allegations that Father Marcelo Pérez Pérez was the founder of that group and that he gives orders to the members of the Self-Defense group, Comandante Machete rejected such assertions, indicated that those accusations “are lies,” that they were organizing little by little, and that they didn’t even know Father Marcelo before they irrupted publicly.

They ask the government to investigate the Los Herrera group of sicarios. “The pain and death forced us to organize to defend our people. If we have more than 200 murdered, we cannot stay with our arms crossed,” they said.

And that Father Marcelo Pérez Pérez has only been a mediator for peace, a mediator in the dialogue tables, a peacemaker who has kept violence from spilling over in that municipality.

Therefore they warned that if “anything” happens to the three councilors, the 20 commissioners or to Father Marcelo Pérez Pérez, they are going to mobilize as far as they can to protect and defend them from those who attack them.

They asked the state and federal governments to better investigate the criminal group of Dayli de los Santos Herrera Gutiérrez, who the State Attorney General arrested Tuesday, accused of being the alleged intellectual author of the murder of the indigenous justice prosecutor, Gregorio Pérez Gómez, riddled with bullets last August 10 in the southern part of San Cristóbal de Las Casas.

They should investigate who the ex military man is that came to train the hit men (sicarios) of the “Los Herrera” organized crime group and also investigate their protectors in the state capital, such as César Espinosa Morales, one of the state leaders of the PRD in Chiapas.

The El Machete self-defense group said nothing about the 21 missing persons, who their relatives claim and who accuse El Machete of having kidnapped last July 26 in the municipal seat of Pantelhó.