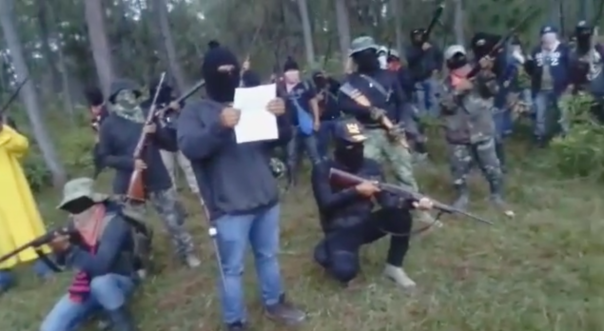 Above Photo is a screen shot taken from the armed self-defense group’s video.

In Altamirano, the municipality located in the jungle zone of Chiapas, the Kanter family has governed since 2002. The men of the family and their wives have rotated holding the position of municipal president. Residents of the place decided that this was going to end, and since last October 1 they closed the entrance to the municipal seat to prevent Gabriela Roque Tipacamú, wife of Roberto Pinto Kanter, from taking office as mayor. Meanwhile, in support of this movement, an armed self-defense group came to public light in this municipality.

“The self-defense group greets you. We’ll leave it without a name, not because it doesn’t have one, but rather out of respect for the EZLN brothers. What we are interested in telling you from this municipality of Altamirano, Chiapas, is that we have seen how the rich protect each other, how the politicians protect each other, regardless of party. They want to deceive us sating that because they changed political party now they are new. What never changes is their indifference to us, the indigenous Tseltal and Tojolabal peoples,” they said in a video, where a group of masked men are observed, carrying hunting rifles, like those used in rural communities. Watch the video in Spanish here: https://www.youtube.com/watch?v=tzAPSHw2LDQ&t=47s

Altamirano is one of the municipalities that the Zapatista National Liberation Army (Ejército Zapatista de Liberación Nacional, EZLN) took over in January 1994. It was also in January 1994 when opponents came out against the Zapatista movement and its measures for regaining possession, such as taking over ranches and haciendas that were in the possession of the latifundistas (big plantation owners) where the indigenous peoples worked as housed peons (serfs).

Jorge Constantino Kanter was one of them. He headed the hacendados (plantation owners) of Altamirano, Comitán and Las Margaritas, in the marches and protests to demand that the Mexican Army enter the jungle to fight the Zapatistas.

Constantino Kanter became famous for saying loudly: “the life of a chicken is worth more than the life of an indigenous person.” They didn’t recover their ranches, now in the possession of indigenous peoples, but the Kanter family held on to political power in the region.

It was at this time that Altamirano residents protested, arrested Roberto Pinto Kanter, burned the family house and closed off access to the municipality. Since then, they have demanded that the Chiapas government form a municipal council. There has not been a response. And it’s in this context that a new armed self-defense group announced itself in Altamirano on October 7.

“We are seeing how our brothers from different communities have been fighting for several days, under the sun and the rain, to drive out the Pinto (Kanter) family, who came just to take advantage of the pay: abandoned highways, people without jobs, a lot of migration to the United States, because we live in the same poverty. There is no electricity, water, the hardest, without justice and without democracy,” they said in the video, this self-defense group.

“Here, the one who wins an election is the one who has the most money, because here in Altamirano, democracy and justice have a price. To these brothers who are struggling, we say that they have our support. We will help them defend this territory, at whatever cost, so that there are no more criminals and thieves, so that deaf and self-seeking governments end, and so that the exploitation of our natural resources ends.

From the mountains of Altamirano, ¡Viva Altamirano! ¡Viva the self-defense groups!” they maintained. In Chiapas, last July, the first self-defense group emerged in Pantelhó municipality, “Los Machetes,” who expelled the municipal authorities, and who they consider part of the organized crime groups that had positioned themselves in the region and murdered dozens of residents. In addition to “Los Machetes” and the Altamirano group, two other groups have come forth, one in Simojovel, and another that claimed to be “people of the jungle.” Residents of those localities have not legitimized the latter two.

← They demand forming a municipal council in Altamirano
Comandante Machete: That the government recognizes our elected authorities and not Trujillo Morales! →