A Tseltal woman is the new mayor of Altamirano, Chiapas

The new mayor’s unlikely story began when a group of Altamirano residents started operating  mototaxis without permits. Drivers of the “pirate” mototaxis clashed with drivers of traditional taxis with permits; one group would set the other group’s taxi on fire and the other group would retaliate in kind. The mototaxis involved in this dispute are 3-wheel motorbikes with a covered cab for carrying passengers a short distance.

Altamirano is a municipality located in the jungle region of the Mexican state of Chiapas. It is also the name of the town that serves as the municipal seat. The Morelia ejido is just a few miles down the road from the town of Altamirano. Morelia is home to Caracol IV, one of the regional government centers of the Zapatista National Liberation Army (EZLN, Ejército Zapatista de Liberación Nacional). Caracol IV is where Zapatista women hosted International Women’s Gatherings. 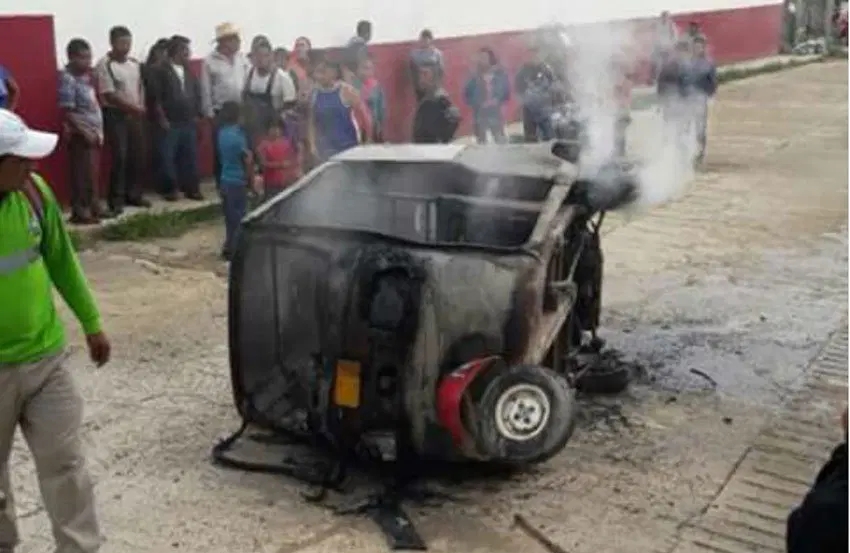 Above: A mototaxi burns in Altamirano

Eventually, the “pirate” mototaxis  received a few permits from municipal authorities, but Altamirano ejido owners complained that the municipal council supported the traditional taxi drivers and did not give the ejido owners enough permits. Mototaxis can provide additional income to struggling campesino families. Conflict between the two groups of drivers persisted and other violent conflicts took place, including kidnappings and house burnings.

The conflict came to a head on September 16, 2021 after the traditional Cry of Independence ceremony [1], when a group of people set fire to the Altamirano City Hall, causing serious damage; they also burned a police patrol car and reports allege that furniture and computers were stolen. The mayor, Roberto Pinto Kanter, blamed the sons of ejido owners and asked state authorities to solve the problem and bring the full weight of the law to bear on the offenders. Ejido authorities denied his accusations.

Reports about the conflict revealed disagreement and dissatisfaction with the mayor and the municipal council coming from Altamirano ejido owners. Comments about Pinto Kanter never being present in the municipality and that he and his wife had occupied the municipal presidency for too long were quoted in the press. There have also been indications in some press reports that Altamirano experiences violence involving criminal gangs. The mototaxi dispute became part of a larger political dispute.

Finally, on September 29, 2021, ejido owners and residents closed off the three accesses to the small town of Altamirano. The following day, they took the mayor, Roberto Pinto Kanter, into custody and placed him in the ejido jail. His term as mayor expired that night (September 30). His wife, Gabriela Roque Tipacamú, was elected in the June 6 elections to succeed him on October 1. However, residents said the election was stolen with money and that voters were threatened. They also claimed that Pinto Kanter had threatened to kill “four or five” members of the opposition group.

The ejido owners and residents of Altamirano began meeting with the state Congress to press their demands. They demanded that Pinto Kanter and his entire family leave the municipality and that the state Congress name a new municipal council. Meanwhile, Roque Tipacamú was unable to take office because the opposition blocked her entry to the town. Residents placed another seven people, including some of the municipal council, in jail, and then began providing services and security to the town on their own.

In a video, a Self-Defense group announced itself in support of Altamirano residents’ actions to oust the Kanters. The group said it would not reveal its name “out of respect for the EZLN brothers.” Its discourse revealed a class consciousness and a distaste for the political parties. [The video in Spanish: https://www.youtube.com/watch?v=tzAPSHw2LDQ&t=47s] The residents’ opposition group claimed not to know anything about the self-defense group.

Three weeks and many meetings with state representatives later, on October 21, Roque Tipacamú and her entire municipal council asked the state Congress to approve their requests to resign.

The Congress took the above action to resolve a political war that first seemed to erupt as a dispute between rival groups of taxi drivers, but escalated after the municipal elections of June 6, 2021 into violent conflicts with political overtones. The area’s history may provide some insight into the rapid escalation of events.

In an article for Chiapas Paralelo, Angeles Mariscal reviewed the history of the Kanter family, who had governed the municipality since 2002. They not only had political control, they had also monopolized large swaths of land known as latifundios, once coffee plantations that morphed into cattle ranching estates, or fincas, after other countries began filling the demand for coffee beans and McDonalds and fast-food hamburgers went international to create a huge demand for beef. Indigenous residents of Altamirano were housed as peons, or serfs, on the coffee plantations and fincas.

Altamirano was one of the municipal seats taken over in the 1994 Zapatista Uprising, when the EZLN also took back many of the lands stolen from their ancestors, so that an indigenous  population dying from malnutrition and curable disease would have enough land on which to grow food to feed themselves. The Kanter family were finqueros (estate owners) and the EZLN “recuperated” their estates.

Although the EZLN took back much of their property, the sons and daughters of the estate owners have continued to hold on to political power in Chiapas. The political process that just played out in Altamirano challenged that political power. While it may seem like removing a former estate-owning family from power is a step in the right direction, only time will tell if Altamirano’s residents now have a municipal government that will work for them and if the violence will stop.

[1] The Cry of Independence (El Grito de independencia) commemorates the battle cry of 1810 calling people to a war of independence from Spain.