The “ya basta” of the indigenous Otomí community 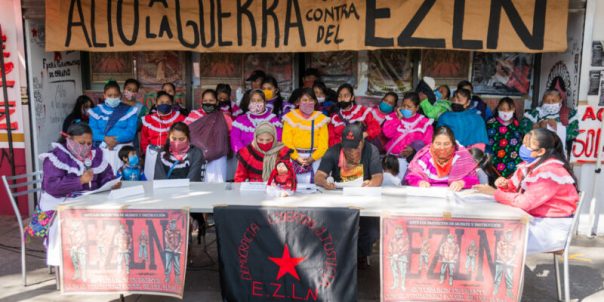 A movement is underway that did not begin on October 12 with the decision of the Otomí community of indigenous Otomí residents in Mexico City to take over the central offices of the National Institute of Indigenous Peoples (INPI, its initials in Spanish) indefinitely. This movement must be analyzed in its different dimensions. Indigenous natives of Santiago Mexquititlán, Amealco municipality, Querétaro, residents in Mexico City for more than 20 years, are heading the takeover. Since then, they have fought for their right to access dignified housing, they have toured government agencies, have done the paperwork, without results. They have lived crowded, without basic services on four abandoned properties on 74 Zacatecas Street and 200 Guanajuato, in the Roma District; 1434 Zaragoza Avenue, by Pantitlán, and Roma 18, in Juárez. This latter one has been abandoned since the 1985 earthquakes, but the 2017 earthquake made it uninhabitable and forced them to camp on the street, Last year, public forces evicted them without fulfilling the promise to legalize their situation..

So far, we have located the local dimension of the problem. However, for four years the National Indigenous Congress (Congreso Nacional Indígena, CNI) and the Indigenous Government Council (Concejo Indígena de Gobierno, (CIG) have been linked to the demands of the peoples for their collective rights. That’s why they call their brave decision “Takeover for the dignity of our peoples.” They added: “It’s time to raise your voice and not remain silent. They have oppressed us for 528 years, they have dispossessed us, as if to leave us 528 more years,” indicated Maricela Mejía, a councilor of the CIG, backed up by her compañeras. At first they asserted that the INPI doesn’t represent them, nor did the previous initials, but that now it will be true that this building will be their home. As such, they proceeded to occupy two of its six floors and upholster them with posters of the Zapatista National Liberation Army (Ejército Zapatista de Liberación Nacional, EZLN). In the installations of the INPI the Otomí community, last October 17, held the forum “528 years: our little light of resistance and rebellion is still lit,” with the participation of the CIG spokesperson, María de Jesús Patricio (Marichuy), who supported the action of the Otomí community in the CDMX (Mexico City). She told them: “We’re going to continue because you have a very important tool, which is your voice. We may not have weapons, but our weapon is the voice and we don’t have to keep quiet.” They are part of the national indigenous movement. In their press conferences the Otomís include questioning of the megaprojects in progress, demand that real indigenous consultations be held and state that they oppose the Tren Maya/Maya Train, the Morelos Integral Project, which includes a thermoelectric plant, and the Interoceanic Corridor on the Isthmus of Tehuantepec.

The peoples and organizations of the CNI and the National Indigenous Network (Red Nacional Indígena, RNI) have added themselves to their demands and expressed support for them, in contrast with other indigenous groupings that suppose it necessary to close ranks with the director of the INPI, allegedly aggrieved by the takeover of its offices.

It’s interesting to observe how the Government of Mexico City, the one directly responsible for the long-standing lack of attention to the Otomí community, has been camouflaged in the INPI, which shows that it represents the federal government of Mexico in its official communiqués. To date, its posture is not known. The CDMX Secretariat of Government and the CDMX Human Rights Commission are referred to as the mediating institution (press release 10/15/20). Surely the Otomí community will be analyzing the proposal to participate in a work group that will cause it doubts, since throughout the years that it has been expressing its demands and carrying out official procedures, they now la invite them to dialogue in order “to know their needs and requests and to advance in attention to them.” Already Nashieli Ramírez, president of Mexico City’s Human Rights Commission, went to the takeover and offered, with respect, mediation in a dialogue, as well as follow-up on compliance with the agreements that are made, and is awaiting their response.

The “ya basta” of the Otomí community has placed a mirror on the “neo-indigenism” underway, for now the evidence that individual support programs or scholarships are not enough, as long as the structural problems of the indigenous peoples with respect to their self-determination and autonomy are not addressed. This movement grows with the national agenda, which adds previous grievances to the current ones in the times of the so-called 4T. It’s unthinkable that the government would propose and the CNI-CIG, much less the EZLN, would accept a “dialogue” that will produce a new version of the unfulfilled San Andrés Accords. It’s a coin toss. To begin with, it’s uncertain whether they will provide housing to Otomí residents in Mexico City.