The temporary suspension against the Maya Train 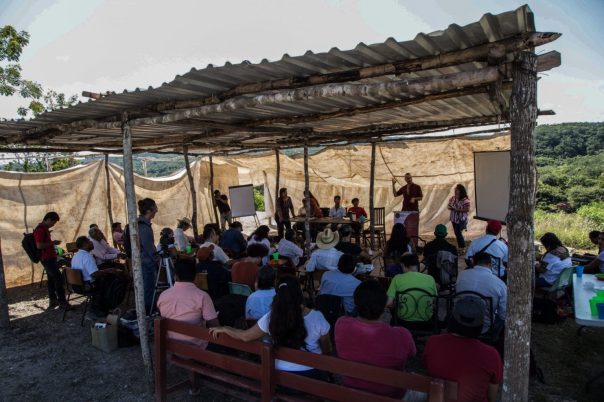 The screech of emergency brakes on the Maya Train turned on alarm lights for investors. Campeche communities pressed the legal button to stop the government locomotive. And the Judicial Power of the Federation granted them a temporary suspension for the execution of the project.

The request for protection of justice was presented last January 6. In it, the Peninsular Maya and Ch’ol people, settled in Xpujil, capital of Calakmul municipality, evidence “the simulated and fraudulent indigenous consulta (consultation or referendum) ordered by the federal Executive and executed to the detriment of the indigenous peoples of Campeche, Yucatan, Quintana Roo, Tabasco and Chiapas.”

The amparo (temporary suspension) –the complainants denounce– starts with the fact that the consultation process was carried out without complying with los international standards that ILO Convention 169 sets forth, as well as in contravention of what the Inter-American Court on Human Rights points out.

The consulta that the federal government organized did not comply with the character of informed or prior, “because we did not receive detailed information sufficiently in advance, nor was our right to participation respected, since the structure of the forums of the supposed information phase, was designed and implemented unilaterally, and so its forms and modes were not consistent with the communities’ forms of deliberation and making agreements.”

Instead of taking the opinion of all the people, the Fonatur and the INPI concentrated on consulting municipal and ejido representatives. The consulta was not carried out in good faith, nor was it culturally adequate.

The Indigenous and Popular Regional Council of Xpujil (Cripx, its initials in Spanish) presented the request for an amparo. The Council was founded in 1995 with more than 3,000 heads of family, indigenous and mestizo. Its members immediately butted heads with the ejido commissioners’ monopoly on agrarian and social representation. Like many other social movements in the Mexican countryside, in order to have a legal figure capable of receiving funds and to have political interlocution, they became a [nonprofit] civil association (asociación civil, AC). They displaced the pro-government Council of Zoh Laguna, which maintained political control in the area for years.

The Cripx promoters come from the experience of liberation theology and the Church Base Communities. The parish priest of Candelaria, José Martín del Campo, played a key role in their formation; between 1983 and 1984 he was transported to Xpujil with some men, who then reached their families.

Together with other residents, the new settlers formed the Cooperative called Sa’clajel Ty Maty’el (New Dawn of the Countryside, in Chol). They impelled very relevant struggles, like the April n1995 roadblock to demand water, health care and education. After the 1994 EZLN uprising, the Army multiplied its presence in the municipality. Members of the Cripx were frequently accused of being linked to the Zapatistas. As a consequence of the mobilizations, some of its leaders were arrested.

Calakmul is located in the southern part of the Yucatan Peninsula. The municipality, born in 1996, is in the hands of the PRI. Until the late 1960s, it had a low population density. But, the promotion of colonization of the jungle on the part of [former president] Luis Echeverría’s government changed the pattern. Migrants coming from more than 23 states arrived in those lands. Its inhabitants are dedicated to subsistence and commercial agriculture, and partially to tourism (about 40,000 tourists visit the area each year). Almost 40 percent are found in a situation of food poverty.

The power, decision-making capacity and resources in the municipality are concentrated in the ejido owners, leaving out the majority of the population: women, young people and settlers. The communities were divided inside. In 1989, the biosphere reserve decree further complicated the situation.

Like other migrants, Romel González arrived in Calakmul in 1989. Trained in liberation theology, he participated in the popular urban movement in San Agustín, was the leader of the National Plan de Ayala Coordinator on the peninsula, and accompanied the formation of the Cripx. Today, he is one of the organization’s spokespersons.

The New Dawn Cooperative fractured when some of its founders and advisors entered fully into party politics, several at the hand of Layda Sansores. Others refused to follow that route. They are the ones who make up part of the Cripx. They have not ceased promoting the construction of popular power, starting exemplary alternative development projects, municipal schools, community tourism and forest fire management.

Their old compañeros and now detractors work in the municipal government and, without consulting the communities, promote the Maya Train. They have pressured those who signed the amparo (for example, in Nuevo San José), so that they withdraw their signature and declare that they were forced to sign. In exchange, they offer to resolve a land problem for free.

The amparo that the Cripx promoted expresses the feeling of a wide sector of Calakmul that has no ejido or municipal representation and whose opinion was not taken in the consulta. They are a legitimate expression of discontent over a consultation that, according to the UN-HR, did not comply with international human rights standards in the matter.

← Social Protest and criminalization
Police repress parents and students in Chiapas; 4 are hospitalized →