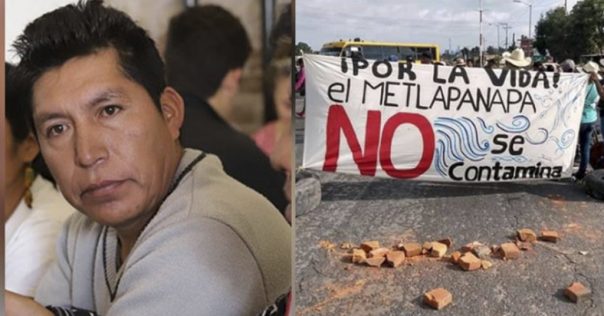 In these times when the so-called Fourth Transformation is stated as a fact, it’s worth reflecting on the implications of the detention in Puebla, as a virtual political prisoner, of the community leader Miguel López Vega, councilor of the National Indigenous Congress (Congreso Nacional Indigena, CNI) and member Peoples Front in Defense of Land and Water Morelos, Puebla and Tlaxcala, an opponent of the gas pipeline and the thermoelectric plant in Huexca. At the same time, he is a community journalist for Radio Zacatepec and is incorporated into the Federal Protection Mechanism for Human Rights Defenders and journalists of the Secretariat of Governance (SG, aka the Interior Ministry).

His most recent participation is tied to the protest of the Santa María Zacatepec community, one of the three auxiliary boards of Juan C. Bonilla municipality, against the decision of the State Water and Sanitation Committee of Puebla (Ceaspue) to tube the industrial waters of the Huejotzingo Textile City Park, which will flow into the Metlapanapa River. The community posture in defense of the river has been firm, and the reasons for preventing its pollution solid. Specifically, last January 24 Miguel López Vega delivered the minutes of agreements of the community assembly effectuated one week before to the Puebla government, in which they removed the president of the auxiliary board of Santa María Zacatepec by means of uses and customs, and the people elected a new representative to continue with the river’s defense. He was detained upon leaving the government office and moved to the House of Justice in Tlaxcalancingo, Puebla, The next day, he was secluded in the prison in San Miguel, accused of obstruction of a public work, damage to the streets and roads and the use of explosives, without presenting evidence, except the statements of two Ceaspue workers. From the outset, one observes that the use of legal criminal figures to individualize penal processes is arbitrary in the case of conflicts and mobilizations resulting from community decisions. Especially serious is the accusation without evidence of the use of explosives. These criminal types are incompatible with human rights and especially with those related to indigenous peoples, and lend themselves to the discretion of the political and economic interests at stake.

As soon as the arrest was known, campesino and social organizations, business people and residents of Santa María Zacatepec blocked the México-Puebla federal highway to demand his release, which was withdrawn prior to a community assembly, in order to attend a dialogue table with the state government, which marked off the criminalization, which at least speaks to the need to investigate the Ceaspue and personnel of the state prosecutor’s office.

The immediate reaction of the CNI and the World Association of Community Radios Mexico Chapter (Amarc Mx, its Spanish acronym) and state organizations were key, as well as the Article 19 international organization. For its part, the Zeferino Ladrillero Human Rights Center announced the creation of an international observation mission made up of Front Line Defenders, Services and Advisory for Peace, the All Rights for Everyone Network.

Given the unsustainable accusations and above all the political demand, Miguel López Vega was released on January 29, but the [legal] process is still not complete; every 15 days he is obliged to sign into the San Miguel prison in the capital of Puebla. The judge set a deadline of March 29 to provide evidence and conclude the criminal process for “attacks on the roadways” (roadblocks). The legal quality of his defense is guaranteed, because his lawyer, Juan Carlos Flores Solís, was also a political prisoner in the previous government for his participation as part of the opposition to the Morelos Integral Plan’s gas pipeline and has promoted and won restraining orders (amparos) in that case. He reported that the Ceaspue did not present licenses for construction of the work, an environmental impact statement or permission from the National Water Commission for discharge into the tributary. In addition, there were anomalies in the accusatory statements of Ceaspue workers, for which the judge determined to throw them out.

In this context the project to discharge industrial waters into the Metlapanapa River was closed by the Juan C. Bonilla municipal council, with intervention from the Governor of Puebla, Miguel Barbosa, in the logic of damage control, without being a definitive cancelation, because there is talk about conducting environmental impact studies, which open the margin for manipulation. However, it was evident that the community of Santa María Zacatepec is united and organized and counts on broad social and political support. The presence of María de Jesús Patricio Martínez, Marichuy, with members of the CIG at the moment of the community leader’s release was very significant. The strength of symbols!

← ENCUENTRO: IN, AGAINST, AND BEYOND THE CAPITALIST HYDRA
The temporary suspension against the Maya Train →