Hundreds of Zapatista milicianas paraded in the inauguration of the worldwide feminist gathering. Photo: Cuartoscuro

ZAPATISTA WOMEN CALL TO CONQUER THE RIGHT TO LIFE IN FRONT OF 5,000 FEMINISTS

“The right to life and all the rights we deserve and need, will not be given to us by anyone, nor by the capitalist system through the many laws and promises that it makes, but rather we must conquer them all the time and in all places,” the women members of the Zapatista National Liberation Army (Ejército Zapatista de Liberación Nacional, EZLN) affirmed this Friday upon inaugurating the second international gathering of women who struggle, called against gender violence, “because throughout the world they continue murdering them, disappearing them, doing violence to them and despising them.”

“To struggle for our rights, like the right to life, it’s not enough to struggle against sexism or patriarchy, we must also struggle against the capitalist system,” they stated before more than 5,000 women from Mexico and 48 other countries gathered in the Caracol called “footprints of walking with Comandanta Ramona.”

They pointed out that: “what matters is that we fight for our lives, that now more than ever they are in danger everywhere and all the time, and although they may say and may preach that there are many there are many advances for women, the truth is that never before in the history of humanity has it been so deadly to be a woman.”

“This year, the number of violated, disappeared and murdered women has not stopped, it has increased, and we as Zapatistas see this as very serious,” Comandanta Amada emphasized upon making a call to women that it doesn’t matter what your thinking or your way is. 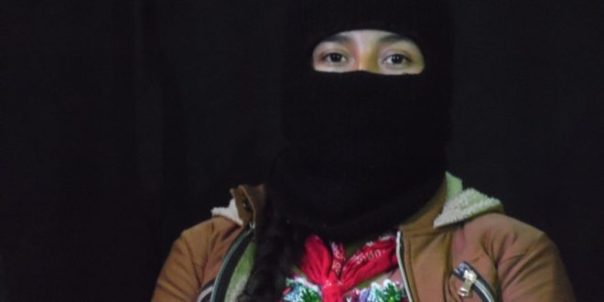 She asked the attendees to always have respect for different thoughts and ways. “Those who are here, and many more who are not present, are women who struggle. We have different ways, for sure. But now you see that our thinking, as the Zapatistas that we are, is that it isn’t useful that we are all equal. We think that difference is not weakness.”

Prior to the inauguration of the Second International Gathering of Women Who Struggle, they carried out the performance called A rapist in your path and sang feminist songs to the rhythm of the batucada. [1]

Feminine collectives arrived in Zapatista territory with diverse currents of thinking or social struggles that have made use of color to self-identify in the global context, making their ideologies public: those who wear a green scarf; promoters of the campaign for the right to abortion; those with the color violet insignia who combat gender violence, wage inequality, femicides; lesbian feminist collectives, among others.

When reading the communiqué from the EZLN women, Comandanta Amada urged attendees to “self-defend as individuals and as women, and above all we must defend ourselves organized, support and protect each other.”

There was a parade of several hundred indigenous milicianas [2] who carried clubs and bows; all of them in charge of the security of the gathering, to which not a single man was permitted entry.

“They keep killing us and they still ask us, demand from us, order us to be well-behaved, and you can’t believe it, but if a group of workers cover a road, or go on strike, or protest, there’s a big scandal; they say that the rights of the merchandise, of cars, of things are violated, and in the communications media there are photos, videos, reports, analysis and commentary against those protests,” Amada reproached from a stage.

But if they rape a woman, “they just put one more number or one less number in their statistics. And if women protest and scratch their stones up above, break their windows up above, shout their truths to those above, then yes (there is) big noise.” “But if they disappear us, if they murder us, then they just put another number: one more victim, one less woman.”

After the inauguration, the Zapatista commanders installed a table for listening to the stories of some of the participants. Testimonies were given of women violated to those to whom the government has not done justice, and who live in fear of being murdered because of denouncing sexist aggression.

Students from the School of Philosophy and Letters described the violence that is experienced inside the UNAM. The former independent presidential candidate María de Jesús Patricio, Marichuy, attended the gathering, as well as mothers of young victims of femicides like Lesvy Rivera Osorio, found dead in University City in 2017.

[1] Batucada is a sub-style of samba, performed with percussion instruments.

[2] A Zapatista miliciana is a Zapatista woman who is a member of a military body similar to the National Guard.