They demand breaking up the armed groups in Chenalhó 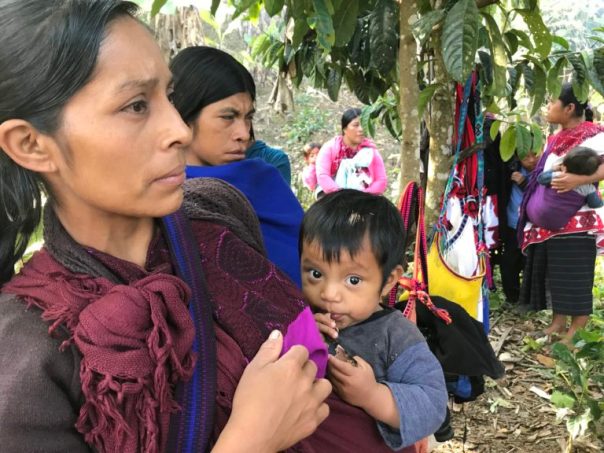 From this community in the Chiapas Highlands, indigenous people from a dozen communities that experienced a massive displacement in 2017, today asked the state and federal government to break up the civilian armed groups that operate in Chenalhó municipality that terrorized them for two years with their weapons and patrols in the region.

Just two days after the two-year anniversary of the murder of the indigenous Tsotsil Samuel Luna Girón, which triggered an armed attack on the residents of Chalchihuitán, on the part of civilian armed group in Chenalhó, today his widow, family members, friends and compañeros of the man riddled with shots, asked for justice and punishment of the murderers and that the government comply with the corresponding indemnifications for all the damages that they caused them, by not having guaranteed the security of those who suffered forced displacement.

Elicia Gómez García, Samuel Luna Girón’s widow, recalled that October 18, 2017, when a group of armed men murdered her husband in front of her and their children, and began to evict them from their homes and burn the houses, as well as those of others neighbors and relatives.

All of that derived from the dispute over territorial limits between the municipalities of Chenalhó and Chalchiuitán, where the comuneros of both places fought each other over some lands where Tsotsil comuneros of both localities grow coffee and corn. This is an agrarian conflict that has several decades now.

It was in October 2017, when more than 5,000 residents of some 11 Chalchiuitán communities bordering on Chenalhó, were obliged to leave their homes and take refuge in the mountains, while some were able to reach other communities or the municipal capital. The displaced had to leave 11 communities.

From the end of October until December, the 5,023 indigenous people, men, women, elderly and children, survived in precarious conditions, in overcrowded conditions, suffering cold and hunger. Some 12 people died of diseases, or because of not having food to give to their children. The dead were the weakest ones, newborns and elderly.

María Pérez Paciencia, from one of the nine communities abandoned on that occasion, recalled the miserable conditions that they had to endure for two months given the indifference of the state government of Manuel Velasco and the federal government of Enrique Peña Nieto. And although there were no conditions for returning, little by little they were returned to their homes, with the permanent threat of being attacked.

Javier Luna Girón, said that the civilian armed groups in the region that forced them to leave their homes continue operating with impunity, and that their dead continue without having justice.

Ausencio Pérez Paciencia, said that two years have already passed and they continue waiting for the payment the state and federal governments promised the 5,000 displaced for everything that they lost: crops, backyard and farm animals, household goods, burned houses that have not been reconstructed and many other material damages that they suffered.

Marcos Pérez Gómez lamented that the state and federal governments have just deceived the population, that these civilian armed groups that are patrolling the roads they continue terrorizing them, that they enter the cornfields (milpas) to intimidate the campesinos of Chalchiuitán. The government has not dismantled them and they have operated since 1997 when they organized as a paramilitary group to perpetrate the massacre of 45 campesinos on December 22, 1997 in Acteal, Chenalhó.