The strength of the insurrection in Ecuador 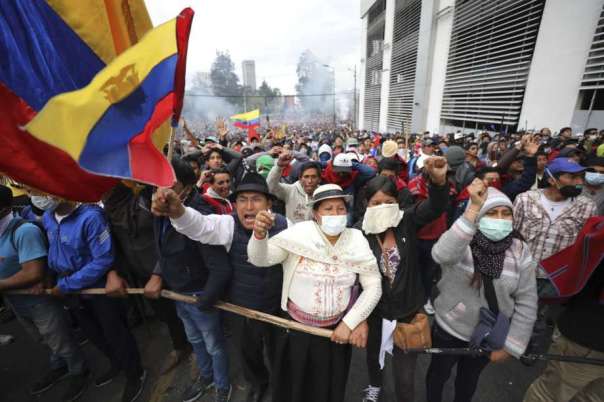 On October 13, after 12 days of social mobilizations, the government of the President de Ecuador, Lenin Moreno, repealed Decree 883, known as the big package, which eliminated the subsidy for gasoline and promoted a series of reforms that affected the least protected sectors of Ecuadorian society. Since October 2, a broad citizen movement headed by the Confederation of Indigenous Nationalities of Ecuador (Conaie), the Workers Unitary Front (Frente Unitario de Trabajadores, FUT) and the Federation of Indigenous Evangelicals of Ecuador (Feine), called a national strike, taking the streets of the principal cities of Ecuador. This citizen mobilization took place in response to the austerity measures decreed by President Moreno Garcés, following the guidelines imposed by the International Monetary Fund (IMF) as conditions for a new 4.2 billion dollar loan. The repeal of Decree 883 was a victory of the coalition of indigenous and popular organizations, which showed in recent weeks the capacity for resistance that the organized people can have.

But the stop of the gasoline subsidy was only the tip of the iceberg of a series of structural reforms that are in Moreno’s inkwell, which include several points that directly affect the most impoverished sectors of the country, and specifically indigenous territories. Among the FMI’s recommendations is a tax reform to make direct foreign investment favorable, reducing taxes on foreign companies while promoting mining and oil extraction by transnationals. This reform would respond to the successful resistance actions of the indigenous movement indigenous against extractivism. Last spring, the residents of Girón, in the province of Azuay, said “no to mining,” in order to protect the Quimsacocha nature reserve, affecting the Canadian company INV Metals. Meanwhile, the indigenous organizations of the Intag region, in northern Imbabura province, declared that zone free of mining and demanded the exit of the extractive companies. Faced with the defense of life and territory, the interests of big capital try to impose with the force of law, maintained with legitimized violence.

The pseudo-left president Lenin Moreno, who had been Vice President during the two terms of Rafael Correa (2007-09 and 2009-13), under- estimated the capacity of the peoples’ resistance, by betraying all his campaign promises and imposing the neoliberal program, which the IMF has wanted to establish on the continent. To the state of exception that the government declared on October 3, which expanded military and police powers for repression, the Conaie responded, declared its own state of exception, demanded the withdrawal of governmental forces from its communities and warned that they would be subjected to indigenous justice in case of violating its jurisdictions. At the same time, the articulation of urban and rural political forces, even the evangelical population, showed the convoking power of the indigenous movement in Ecuador and obliged the government to sit down and negotiate. Together with the repeal of Decree 833, it was agreed to install a commission formed by the government and social sectors to make a proposal that permits balancing the economy. 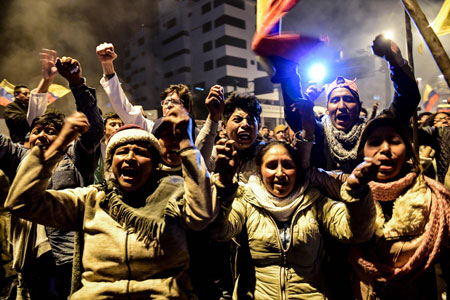 However, the balance of human rights violations committed during those 12 days of mobilizations is pending. The government responded with all the force of its repressive apparatus against the peaceful demonstrations because, according to official numbers, 485 demonstrators were arrested just between October 3 and 6, and the death of 5 more was reported, among them a leader of the Conaie, from the province of Cotapaxi.

The chronicle of the events of October 11, in which one of the authors of this text was present, gives a sample of the violence that the government used against the organized people, whose consequences must still be evaluated. On the ninth day of mobilization: indigenous and mestizos, students and workers, women and men, old and young, from the countryside and the city, marched peacefully towards the National Assembly, and were attacked with tear gas bombs for more than four hours. Then the most delectable strategies were used to ambush the protesters and after a while of suspending the attacks, in the middle of rivers of people, who were demanding justice, three vehicles with food appeared. Those present, lined up to take water, bread, rice and soft drinks, and a break, after hours of marching and receiving aggressions. No one knew where the food had come from, but around 4:20 pm, they heard shots from the tear gas bombs, which took the demonstrators by surprise. The people shouted: “They betrayed us!” and “They paused until they were resupplied with ammunition!” and “We’re not armed, don’t attack us!” Several questions emerge: Did the space turn into the field of attack? Can you say, a concentration camp of attack on the protest? What is clear is that the police and the Ecuadorian armed forces were used infamously and excessively against the people, generating violence and death. The exact number of injured and detained is not known, but the Ombudsman’s Office reported that this week’s events have been the most violent in recent years.

It’s pitiful that it is the governments that come to power with a supposedly leftist agenda, which is supposed to prioritize social welfare policies, who impose the extractive megaprojects that dispossess the indigenous peoples, as well as structural reforms that affect the poorest. The victory of the Ecuadorian popular movement is an example of what can be achieved articulating alliances and using peaceful civil resistance. The Mexican government would do well to learn from the Ecuadorian reality the consequences that wanting to impose on the peoples extractive projects that threatened life and territory can have.

* R. Aída Hernández is a social anthropologist and feminist activist. Ciesas She is a professor and researcher at the Center for Advanced Studies in Social Anthropology (CIESAS). Juan Illicachi is a former rector of the Intercultural University of Nationalities and Indigenous Peoples Amawtay Wasi and Kichwa leader of a grass roots organization of the Conaie.