A great disorder under the skies

Daily protests in Santiago, Chile after a rise in the cost of public transportation. Photo: Edgard Garrido/ Reuters.

The increase in the cost of bus fare in Santiago, Chile was 30 pesos (720 pesos equal one dollar), raising the cost to 830 pesos. It’s evident that the popular reaction was not because of the $0.04 per ticket, but rather was due to very deep causes that have a name: neoliberalism/ extractivism/ accumulation by dispossession.

The Quito Uprising was, formally, against the end of the fuel subsidies, which always make food prices more expensive and prices rise. The original peoples and the workers took advantage of the gap opened by transport carriers, who don’t have popular interests but corporate ones, for throwing themselves into the jugular of the model.

In both cases, and in many others, what’s happening is that the peoples are fed up with an inequality that doesn’t stop growing under governments of the most diverse signs. Because the inequality is structural and is closely tied to the extractive model, which is summed up in social polarization, increasing poverty and concentration of power in the financial elites and big multinational companies.

The gigantic popular mobilizations in Quito, Santiago and Port-au-Prínce, not to mention Barcelona, Hong Kong and Paris, show two things that are guiding the situation: the power that popular mobilization has acquired, capable of configuring deep political turns, and that collective actions transcend governments, questioning a model that produces misery below and luxury above. 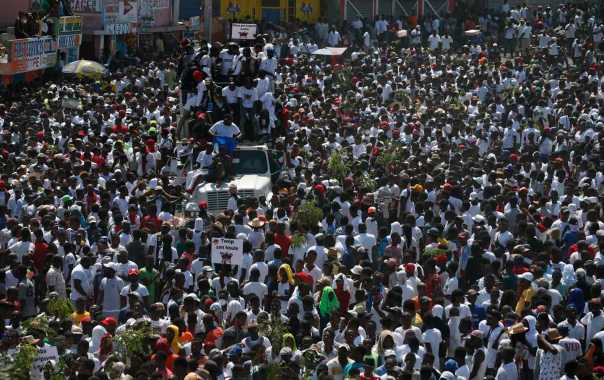 To be more precise: June 2013, with 20 million Brazilians in the streets of 350 cities, was a cry against inequality that buried the governability of Lula by the government not having comprehended the depth of the cry. December 2017 was key, but in an opposite direction, since it buried the conservative and classist governability of Macri.

However, these assessments continue being general and don’t touch the core. Walking through the streets of Quito these October days, where the sticky smell of smoke from burned tires remains, forces you to reflect. The exchanges with people from the most diverse movements, rural and urban dissipate the fog of the systemic confusion in which we move.

The first assessment is that women and youth played a decisive role in the uprising, which overflowed to the historic leaders. They starred in the largest march of women in the history of Ecuador, contributing the knowledge of reproduction and the care of life, adding lucidity to the fervor of youth without diminishing the combativeness.

The second [assessment] is the difference between an organized uprising and a spontaneous explosion. The Confederation of Indigenous Nationalities of Ecuador (Confederación de Nacionalidades Indígenas del Ecuador (Conaie) is a community-based organization, very well structured, and that’s why it had the capacity to get the provocateurs out of the marches, including the masked ones. That’s something that is not being possible in Chile, where police agents systematically infiltrated the demonstrations and encourage looting, which turns the population against the protests.

The third [assessment] is that the uprising was possible thanks to the rural communities in the first place. They provided what was necessary to ensure permanence for 12 days in distant Quito. Two forces stood out: the communities of the central sierra, to the north and to the south of the capital, and the Amazonian peoples, whose arrival organized as an indigenous guard was decisive in the final days final.

There was also an important presence of urban communities, the poor neighborhoods where the young people played an active and decisive role. A sector of the urban middle classes overcame the racism promoted by the media and supported the original peoples with water and food.

Finally, there is the interpretation of what’s happening. Among the different analyses, I believe the most profound is the one that Juan Cuvi and his colleagues write, in a work entitled “The exhaustion of a social control model” (El agotamiento de un modelo de control social). This model was born in the early 2000s with Lucio Gutiérrez and was developed throughout the decade of Rafael Correa.

In effect, the model is in crisis, but nothing is seen that can replace it in the short term. That’s why the chaos is underway, which will last for an unpredictable time, until the forces capable of overcoming it mature. We must think in terms of decades, more than of years and, even less, compress the changes underway to electoral times. Nor can we think that what’s coming is necessarily better that what expires.

A great disorder, as Mao Zedong pointed out, can be something positive. A great order is the social cemetery capital needs to continue accumulating. Disorder isn’t enough to modify things. The system counts on social protest social for redirecting it towards its interests, taking advantage of the confusion that may be functional, if we don’t find ways of converting the current situation into a scenario favorable to the peoples.

← They demand breaking up the armed groups in Chenalhó
Day of the Dead in San Juan Chamula, Chiapas →