Join us in a solidarity action: Be the dream! 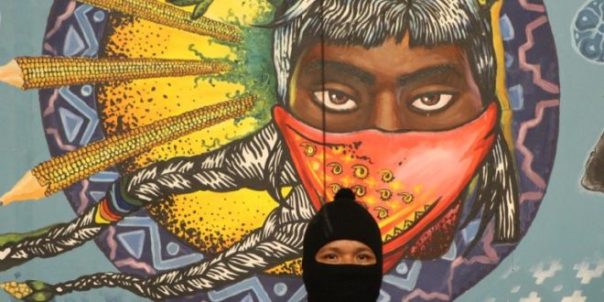 Our warmest wishes to you in this season of holidays filled with joyous struggles for justice and dignity.

And in the season’s spirit of generosity, solidarity and community, we invite you to join us in honoring the Zapatistas on the 25th anniversary of their uprising by making a donation to support Zapatista parents and children in Chiapas build schools.

Solidarity is not just a sentiment; solidarity is direct action: Join us in walking side by side with the just movements and struggles of our indigenous sister-brother communities in Mexico.

We are asking you to uplift and be part of the Zapatista dream by making solidarity today and click on the donate button to make a donation now to support the Zapatistas’ work to build an autonomous secondary school system.

Your donation will go directly to training secondary school teachers from the four autonomous Zapatista municipios (counties) that comprise the Caracol of La Garrucha. And your donations will also help fund the construction of four classrooms, one in each of the four middle schools to be constructed (in the municipality belonging to the Caracol of La Garrucha. Donate now by clicking here!

On January 1, 1994, the day the U.S. began implementing NAFTA, the tri-national “free” trade agreement between the U.S., Canada and Mexico, the world woke up to the first rebellion saying NO to the global neoliberal capitalism led by the indigenous-led EZLN, the Zapatista Army of National Liberation, from Mayan lands in Chiapas. The 1994 Zapatista uprising was a historic and organized NO from below to capitalism so that their deep YES to building communities of caring for the land and her peoples could thrive.

And ever since the Zapatista dream of justice and liberation has moved, united and connected many Indigenous and non-indigenous communities, organizations and movements in Mexico and across borders to dream and build the world where the exploited and oppressed, the excluded and the ignored have first voice, where all working and indigenous peoples live and are in control of their lives and communities. As the Zapatistas celebrate their landmark anniversary, they have been constructing a better future for their children.

The Chiapas Support Committee (CSC) is committed to supporting the construction of a better future and we’re asking you to join us in that commitment by making a generous donation to make dreams come true.

The year 2018 began with an important January visit from Mario Luna, International Representative of the National Indigenous Congress (Congreso Nacional Indígena, CNI in Spanish) and the Indigenous Council of Government (Consejo Indígena de Gobierno, CIG). Luna’s visit was part of the West Coast portion of a US tour sponsored by the Sexta Grietas, a US-based network of collectives and individuals who adhere to the EZLN’s Sixth Declaration of the Lacandón Jungle and support the CNI-CIG.

The CSC is a member collective of the Sexta. We arranged meetings with local organizations and media interviews. We also hosted a public gathering at the Omni Commons in Oakland, where art from the Zapatista communities was on display. This tour was successful and laid the groundwork for future cross-border organizing work with the CNI-CIG in the US.

The tour was inspiring and critical to the organizing work of the CNI-CIG, of which the Zapatista National Liberation Army (Ejército Zapatista de Liberación Nacional, EZLN or Zapatistas) is a member organization. The campaign of María de Jesús Patricio Martínez (Marichuy) as an independent pre-candidate to the presidency of Mexico organized indigenous peoples into the CIG, and non-indigenous people into collectives and groups in support of the CIG.

The Zapatistas took creative solidarity action to oppose the virulent attacks on migrant workers and communities in the U.S. They donated hundreds of pounds of Zapatista coffee and asked members of the Sexta to sell it and give the money raised to support migrant rights organization leading the struggles and movements for justice and against policing and deportations.

The Chiapas Support Committee took up the Zapatista solidarity proposal and sold Zapatista coffee at events and gatherings, donating all the money raised from Zapatista coffee sales to a local immigrant women’s organization. The CSC also co-sponsored the showing of “Dispatches from Resistant Mexico” at Film Night, at the Omni Commons and hosted Duamuxa for a musical canción nueva report back from a solidarity delegation to Palestine.

One of our Board Members worked with a group of Bay Area women to the “First International Gathering of Women that Struggle,” sponsored by the Zapatista women and held March 8-10 in the Caracol of Morelia, Chiapas. After everyone returned from Chiapas, we sponsored “Zapatista Women Inspire the World,” a May 18 report back from the Women’s Gathering with film shorts and a panel of women who attended that amazing event offering their perspectives. Some 8,000 women from all over the world attended the Zapatista Women’s Gathering. Then in August, we presented our 3rdannual CompArte cultural festival with a mix of poets, artists and musicians.

We continue to offer a free space for critical reflection and solidarity, open to the community, for learning and dialogue about Zapatismo. We call this space “Waffles & Zapatismo.” The W&Z classes enable us to connect with new people and learn what others are doing to build justice and community.

We ended the year of 2018 by celebrating the 25th Anniversary of the Zapatista Uprising with a special end of year fundraiser that featured a film screening of “Corazón del Tiempo (Heart of Time),” a love story in times of Zapatista resistance. All the proceeds from this film gathering and your generous donations will be sent to the Zapatista Caracol of La Garrucha for the construction of four autonomous Zapatista middle schools (more on this later).

2018 was an incredible year of Zapatista organizing and resistance in Mexico that inspired and guided our work here, too. Throughout her campaign as an independent pre-candidate to the presidency of Mexico, María de Jesús Patricio Martínez (“Marichuy”), the spokesperson and representative, organized both indigenous and non-indigenous peoples into the Indigenous Governing Council (CIG, its initials in Spanish) and into collectives and support groups. The EZLN and CNI-CIG further solidified their work and invited all to organize against capitalism and for autonomous community. The Zapatistas also held several joint meetings in Chiapas this year, which included not only those of us in the national and international Sexta(Sixth), but also the new groups and collectives that formed in support of the CIG and Marichuy’s campaign.

After the Women’s Gathering, the Zapatistas held a seminar of critical thinking, the cultural festival of resistance, CompArte III, and the First Film Festival, which they announced would be an annual event. The CNI held an assembly in October to discuss organizing proposals and decided to send them to the communities for consultation.

The EZLN-CNI-CIG will end the year with a celebration for the 25th Anniversary of the Zapatista Uprising in La Realidad on New Years Eve as they prepare for more resistance, more solidarity and deep community.

You can make that dream come true with a generous donation to the La Garrucha Education Fund. Details of the project are in the online fundraising appeal we initiated in October and can be found here.

You can mail your donation (see address below) or give a donation now  by clicking here Solidarity Action Giving. We are a 501(c)(3) non-profit and an all-volunteer collective, so every donation we receive is important to us and to the communities in La Garrucha.

Carolina Dutton, Chair, on behalf of the Chiapas Support Committee Board