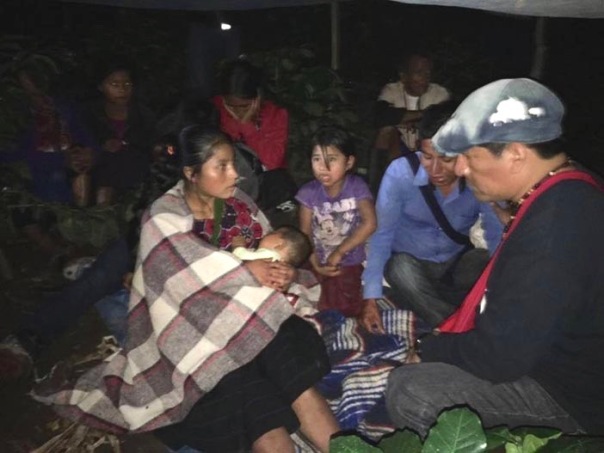 Those displaced from Chalchihuitán are living outdoors in the winter.

Four displaced children died from cold and hunger last week in the icy parts of Chalchihuitán, in the Chiapas Highlands. Two adults also died, according to what the municipal president municipal of that municipality, Martín Gómez Pérez, reported. More than one thousand people remain in the mountains, spending the night in caves or under trees, away from their communities, for fear of death threats from paramilitary groups that, according to what the mayor denounced, were armed by the municipal president of Chenalhó, Rosa Pérez.

One of the little ones that died was three days old. His mother gave birth outdoors. The others were four years. Two adults also died recently. The temperatures get down to close to zero degrees during the night and at dawn in that mountainous zone.

On Saturday, former municipal presidents and agents of Chalchihuitán arrived at the parish of Simojovel to speak with the parish priest Marcelo Pérez and to make the denunciation. “We don’t have anything to care for the people. There is no medicine or food, and many are sick because they have been living away from their homes almost two months now. We don’t even have the means to move the most seriously ill, because the roads remain blocked,” the municipal president reported to this newspaper in a telephone interview.

The children that died were from the communities of Pom, Canaluntik and Telmut. To date, the residents of those sites remain displaced, the same as Bolonchojón, Cruztón and three other places. “What’s happening is very sad and unjust. I no longer know what to do. We have no help, nobody listens to us,” Gómez Pérez expressed.

Last week the Fray Bartolomé de las Casas Human Rights Center and the parish priest of Simojovel, Marcelo Pérez, denounced that because of the murder of a Tzotzil from Chalchihuitán, Samuel Pérez Luna, on October 18, thousands of people fled from their homes, and within a few days they added up to around five thousand people displaced.

The local media have recently asserted that the displaced have already returned to their homes and that the highways that connect the towns of Chalchihuitán with San Cristóbal de las Casas are now clear. “That’s a lie. We remain kidnapped in our communities. Shots from high-caliber weapons are heard from Panajó and Nichcacanam at this moment” the municipal president assured.

Last December 4, residents and authorities from the Chalchihuitán communities under siege went to Tuxtla Gutiérrez to denounce the situation and to ask for a meeting with the state’s governor, Manuel Velasco Coello. “But he didn’t receive us. Please excuse what I’m going to say, but the governor treats me like a dog. We have only been able to speak with a few lawyers and engineers that just talk, but don’t give care to the people.”

An old boundary conflict between the municipalities of Chalchihuitán and Chenalhó has generated conflicts in the zone for years. This coming December the agrarian tribunal must resolve the control of close to 900 hectares in dispute. “According to what those of Chenalhó say, if the decision doesn’t favor them they are going to go kill us. We’re living with that threat.”

Last November 16, at a negotiating table, the mayor of Chenalhó, Rosa Pérez, from the Green Party and close to the governor, committed to ordering removal of the roadblocks, which are kept under the control of about 200 armed men. The municipal president maintains: “But that wasn’t fulfilled. To the contrary, each time there are more shootings and then they tell us that there are no displaced. We are not inventing anything.”

On December 10, in the meeting held in Simojovel, the ex municipal presidents, agents and authorities of Chalchihuitán agreed to demand from the Chiapas government that: “the roads to San Cristóbal will be opened at the latest the day after tomorrow, December 12.”