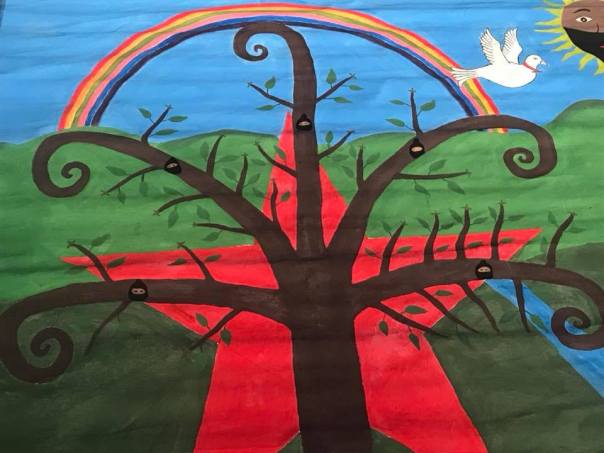 A work of art sent from the Zapatista communities and currently on display in the Ballroom of the Omni Commons in Oakland.

Big changes always begin through small movements, invisible to the analysts of above and to the big media, as one of the communiqués from Zapatismo points out. Before thousands of people occupy the big avenues, underground processes take place where the oppressed “rehearse” the uprisings that they later make visible in the mass events that academia calls social movements.

Those changes that happen in daily life are produced by groups of people who have direct relationships with each other, they are not easy to detect and we never know if they will be converted into mass actions. Nevertheless, despite the difficulties, if we sharpen our senses it’s possible to grasp intuitively that something is changing.

Something like that seems to be happening in the countries of Latin America. A Brazilian compañero considered, during a meeting of geographers with social movements (International Symposium of Agrarian Geography, SINGA), that in this country we are facing a “silent insurrection.” Intuition is based on real facts. In the bosom of social movements and in society’s poorest spaces, women and youth are leading the changes; they are displacing the place assigned to the State and the market.

Real movements are those that modify the place of people in the world when they move collectively and tear the fabric of domination. On this point, it must be understood that there is no direct or mechanical cause-effect relationship, since predictions about human relations are not possible because of the complexity that they contain and because of interaction with a multiplicity of subjects.

In recent years I was able to observe this tendency of silent changes inside several movements. Among the indigenous of southern Colombia, groups of Nasa and Misak youth re-engage in the struggle for land that had been paralyzed because of leaders that focused on the expansion of relations with the State that provides them abundant resources. Something similar seems to be happening in southern Chile, where a new Mapuche generation confronts state repression with renewed forces.

Among the consolidated campesino movements, where potent leadership structures exist, women and youth are engaging in debates and proposals of a new kind, which include the mobilization and organization of individuals who define themselves LGTB (lesbian, gay, trans-sexual and bi-sexual).

We also observe a growing activism in the bosom of traditional movements of black militants that construct Quilombos [1] and Palenques, [2] even in universities, as can be appreciated in Brazilian and Colombian academia where they open their own spaces.

During the (Zapatista) escuelita (little school) they explained to us that half of the Zapatistas are under the age of 20, something that we were able to appreciate. The participation of young women is notable. Those who participated in the art and science gatherings the Zapatistas convoked emphasize this reality. In other movements the organization of boys and girls appears with assemblies that exclude their elders.

What reflections can we make about this silent insurrection, which spreads to all of society and particularly to the anti-systemic movements. Without seeking to exhaust an incipient debate, I propose three considerations.

The first is that the insurgencies underway of women, of black and indigenous peoples and of young people in all the popular sectors, are impacting the interior of the movements. On the one hand, they are producing a necessary generational change without displacing the founders. On the other hand, that change is accompanied by ways of doing things and of self-expression that tend to modify political action in directions that the one who writes these lines is not capable of defining clearly.

The second consideration is of a qualitative character, closely related with the first. The youth/feminine irruption is a carrier of questions and cultures elaborated inside of the movements, with their own characteristics. The women of below, for example, don’t hoist the classic feminist discourse, nor that of equality of difference, but rather something new that I don’t dare conceptualize, although there are those who mention community, black, indigenous and popular feminisms.

The desire of the Zapatista youth to show their music and dance is something more than an artistic question; it’s the same as their questions about science. In some cases, like the Mapuche or the Nasa, changes can be observed that, from outside, we can evaluate as a radicalization that doesn’t focus only on forms of political action, but also on the recuperation of traditions of struggle that their elders had almost abandoned.

The third consideration, and perhaps the most important, is that the irruption of the women and youth from below is profiling another conception of revolution, which is separate from the traditional theory of Leninist style revolution. Another question appears here: how is politics done in quilombo/Palenque code? How is politics in woman code? I’m not referring to the participation of women and youth from below in already existing structures.

The peoples themselves will give the answers that are opening new paths, although the analyst from above always tends to see them with eyes and concepts of the past. It’s about constructing (new institutions), more than about occupying existing institutions. They are creating new worlds or new societies, if you want to name them with the old concepts: one’s own powers, one’s own grassroots justice, sometimes traditions and at other times the common sense of the peoples; health, education and ways of occupying space based on non-capitalist logic.

The world, our world, is changing rapidly. Rejecting those changes would be like annulling the transformative capacity that is burying capitalism and building a new world above its shambles.

[1] Quilombos are towns in Brazil formed by escaped African slaves

[2] Palenques are towns in Colombia formed by escaped African slaves