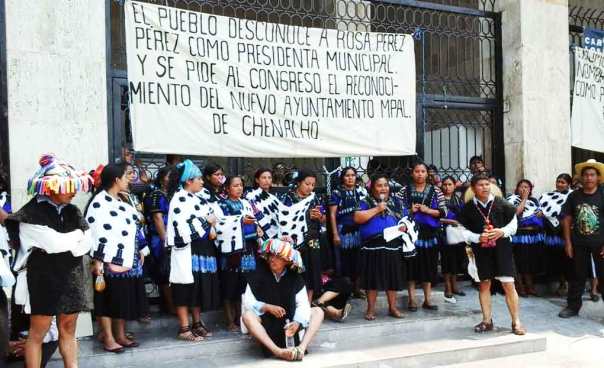 “The people don’t recognize Rosa Perez as the municipal president of Chenalhó and we ask that Congress recognize the new municipal council of Chenalhó.”

After the Unitary Agrarian Tribunal (UAT) ruled in favor of the communal wealth of Chenalhó, the state and federal governments offered 300 houses and 15 million pesos to compensate the five thousand people displaced from Chalchihuitán.

This Wednesday (December 13), the parties in dispute were called to the UAT’s installations in Tuxtla Gutiérrez, where the resolution was issued that put an end to the dispute over the territorial limits between Chalchihuitán and Chenalhó.

Claudio Aníbal Vera, magistrate of the UAT #3, presided over meeting, and the mayors of both municipalities, Martín Gómez Pérez (Chalchihuitán) and Rosa Pérez Pérez (Chenalhó) were present.

Another 20 people –between communal wealth authorities and traditional authorities from both municipalities– were also witnesses to the resolution about the land tenancy in conflict.

Magistrate Claudio Aníbal Verales read to both parties the definitive decision that returns to Chenalhó the more than 350 hectares of land that the Secretariat of Agrarian Reform (SRA) had erroneously given to Chalchihuitán in 1973.

The ruling determined that the Secretariat of Agrarian, Territorial and Urban Development (Sedatu) would be charged with re-measuring two landmarks that are found at the territorial limits of both municipalities.

Prior to the hearing, the agreement and definitive resolution of September 23, 2015 was ratified, which indicates that whatever the ruling, both groups would respect the decision of the Unitary Agrarian Tribunal.

The matter concluded, the Chiapas government issued a check to Nicolás Pérez Girón, ejido commissioner of Chalchihuitán, in the amount of 15 million pesos to compensate for the damages caused by the decision.

However, the document remained under the UAT’s guard because the municipal president of Chalchihuitán didn’t want to sign it, because in order to receive it –he said– he has to ask for the consent of the majority of the people that he governs.

For its part, the Sedatu committed to constructing 300 houses for those displaced in the municipality of Chalchihuitán. It assured that the work would start in January 2018 and the cost per house would be 120,000 pesos.

The Secretariat General of Government reported that after learning of the UAT’s ruling, Chenalhó municipal agents carried out the work of rehabilitation of the road that connects with Chalchihuitán, at the spot where the community of Las Limas is located, and as a result vehicular traffic was reestablished in the zone.

The head of that department, Juan Carlos Gómez Aranda, indicated that per instructions of Governor Manuel Velasco Coello an institutional presence was reinforced in communities in both municipalities, through the Secretariats of Civil Protection, Health and Citizen Security and Protection, as well as the state DIF.

Similarly, he specified that the state government would request the support from the United Nations Organization (UN) to make said presence more effective in Chalchihuitán and Chenalhó.

“It’s appropriate to emphasize that during the Unitary Agrarian Tribunal’s session, the municipal president of Chalchihuitán left the premises, in disagreement with the decision,” he pointed out.

And he clarified that the municipal council is not part of the lawsuit, but rather only representatives of the communal wealth, who ratified out loud its decision to respect the decision of the jurisdictional authority.