Mexico and Venezuela: submission and interference 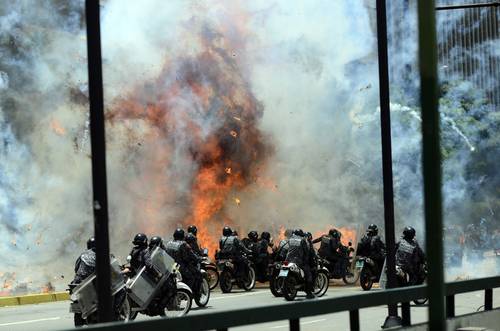 In Caracas, security forces were very busy during the protests against the National Constituent Assembly.

In a joint communiqué, the secretaries of Treasury and Public Credit (SHCP) and of Foreign Relations (SRE) reported yesterday, with respect to the sanctions announced by the Donald Trump administration against Venezuela that the Mexican government “will proceed accordingly, in conformity with applicable laws and conventions in the matter,” and undermined the ability of Nicolás Maduro “to fully re-establish democratic rule and the state of law in a peaceful manner.” In addition, Mexican dependencies (departments and agencies) credited the Washington’s accusations against “different functionaries and ex functionaries of the Venezuelan government” in the sense that they have diminished “democracy and human rights in said country” and that they have participated “in acts of violence, repression and corruption.”

This new official position of the national authorities takes two undesirable attitudes in the management of foreign policy too far: submission to the government of the United States and interference in Venezuela’s internal conflicts, whose solution ought to depend exclusively on the citizens of that South American country.

In the first of those terms, it is regrettable, as far as we can see, that the Mexican government adopts as its own United States accusations against Venezuelan functionaries that that have not even been proven and that, as different national and international voices have pointed out, are presented within the context of an open destabilization campaign that aims to overthrow the Bolivarian government. As to the second attitude, the national institutions lack the ability to issue judgments about the performance of rulers and functionaries of other countries and of “acting accordingly,” as well as to disqualify institutional actions of other nations, such as the convocation of Caracas to a Constituent Assembly.

Anyway, such decisions will not affect the Venezuelan authorities as much as Mexico’s own diplomacy, two of whose fundamental principles, the right to Self-determination and that of Non Intervention, are gravely undermined by such misadventures. Additionally, this alignment with the dictates of the White House on Venezuela constitutes a precedent that weakens Mexico’s ability to invoke such principles in its own defense.

Thus, the position announced yesterday by the SHCP and the SRE attempts, in the first place, against Mexican sovereignty and, secondly, of course, against the sovereignty of Venezuela.

A similar demolition of national foreign policy, dating back at least to Vicente Fox’s term, is particularly dangerous and harmful in a circumstance in which the country faces a racist, anti-Mexican, rude and unpredictable United States presidency, before which it’s more necessary than ever to retake the ethical, legal and diplomatic lines that made Mexico a worldwide referent during the last century.