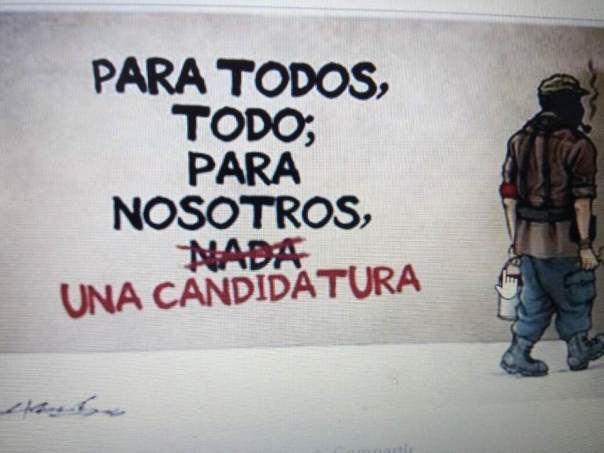 For Everyone, Everything. For Us, a Candidacy!

Three days ago, the National Indigenous Congress (CNI, its initials in Spanish) published the denunciation of the Indigenous Council of the Trueque (CIT, in Spanish) regarding the aggression (threats of violence and provocations) at the Tianguis of the Trueque in Tianguistenco, state of Mexico, on the part of a group headed by an alleged “supreme chief” of Coatepec. The CIT is made up of Nahuas, Tlahuicas and Otomies in the la region. Every Tuesday they attend to exchange (barter) firewood for basic foods. In their story appears the tip of the iceberg of neo-indigenismo, which despite being the gatopardista [1] version of the traditional, turns out to be necessary to consider. Moreover, facing the proximity of an electoral process in 2018, in which the CNI and its Indigenous Government Council (CIG, its initials in Spanish) have decided to participate, through their spokesperson María de Jesús Patricio, as an independent candidate to the Presidency of the Republic.

So, they point out in the referenced denunciation: “Last July 1, before some 50 people, in San Nicolás Coatepec, the mayor of Tianguistenco, swore into office the ‘Pluricultural Indigenous Municipal Council of Tianguistenco’ without consulting the communities or having the corresponding assembly minutes, because of which the situation is aggravated in many municipalities where they have placed ‘tlatoanis’ and ‘supreme chiefs’ that respond to the interests of the political parties and have caused serious conflicts in the communities por su unmeasured ambition for power and converting themselves into puppets of the system.”

The indigenous governor of the state of Mexico and a member of the CNC [2] is Fidel Hernández, who together with Hipólito Arriaga Pote, “national indigenous governor,” promotes the so-called national government of the indigenous peoples, pointing out that they are elected through uses and customs and saying they are ancestral authorities.

At first blush, they evoke what was the official impulse for so-called supreme councils in the 1970s, except that now a good part of the indigenous peoples are organized and resist the onslaught of dispossession on their territories, at the same time that they construct, in fact, authentic spaces for autonomy. Also, this movement, which the CNI created 20 years ago, while it had previous trajectories, was with the Zapatista Uprising and the posture of its leadership, which contributed decisively in the struggle for the legal recognition of their rights as peoples, expressed in the (still) unfulfilled San Andrés Accords.

The paradox is that the so-called governorship wraps its discourse in what Zapatismo and the CNI achieved constitutionally, to which they had objected due to the Congress’ distortions and mutilations of what had been agreed upon in the San Andrés Accords. Through the digital networks we find said “national governorship” in the delivery of the staff of command to their supreme chief, indeed, you guessed it: Enrique Peña Nieto.

We can also know the discourse of the alleged ancestral authorities, which, not by chance, they promote their movement from the state of Mexico and, also not accidentally, they count on economic support from federal institutions. They claim to have indigenous governors throughout the country, elected by the dedazo (being fingered or selected by the powerful), which is the use and custom of the political class. They state that they struggle for the autonomy that is in the Constitution, in Article 2, and they come to argue that they are a national government parallel to the federal government. Their struggle is on two fronts: the budgets assigned to them in the states and the demand that the INE guaranty them special norms directly, without political parties to accede to federal and state deputy and senator positions.

They have advisors throughout the country that prepare legal documents for them, wherein they transcribe how much regulation exists in indigenous matters. They recently presented to the United Nations Permanent Forum for Indigenous Questions, denouncing the INE. They have close to four years with their plan; they move throughout the country and outside of it, without making too much noise, until now.

However, in fact, they usurp the indigenous peoples, distort the meaning and function of the elders, the wise ones, the grandmothers, grandfathers and they enjoy the not so implicit endorsement of official spaces. For example, the INE accredited its “national membership” to participate in a consultation about indigenous electoral districting, with the CDI’s support [3], planned as they know how to do, with a protocol, of course. In the end, all a contrasting scenario with the CNI, which, while it has reiterated that it will not contest in the election to look for votes, it can be affected by activism promoting the community’s vote in exchange for gifts, provoking divisionism, as to which one represents the “national indigenous governorship.” The CNI’s strategy is different, it seeks to give voice, to those above that don’t listen, less in electoral times, promoting organization with the communities, but also to show society the generalized impacts of the extractive model, not just for indigenous peoples and, on the way, approaching with them the mirror of the prevailing racism.

[1] Gatopardismo is to give the appearance of changing something when nothing really changes.

[2] The CNC (Confederación Nacional Campesina) is the national campesino organization associated with the PRI (the political party currently in power).

← The hour of disobedience
Mexico and Venezuela: submission and interference →