Pueblo Creyente proposes to construct autonomy in their communities

CHIAPAS: “We propose constructing autonomy in our communities,” 25 anniversary of Pueblo Creyente* 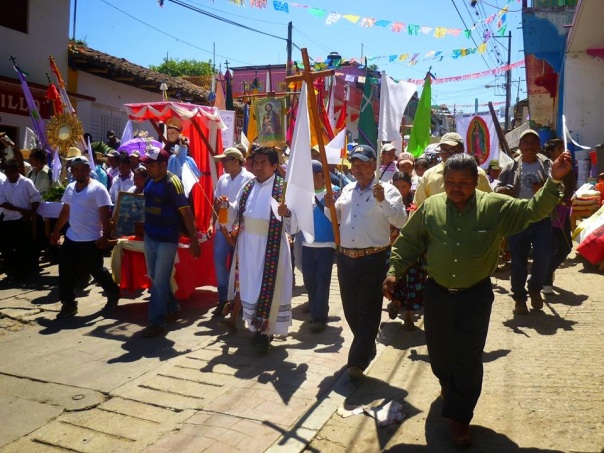 “We denounce the death projects”

To the State and Federal governments

To the communications media

To the men and women that construct peace

Popol Vuh: The dawn came upon all the tribes together. The sun (33) immediately cleansed the face of the earth. The dawn came to the peoples who have walked again and again in the different darkness periods of history.

We greet and we congratulate our sisters of CODIMUJ that celebrate 25 years of walking.

Pueblo Creyente, conscious of the reality that we experience, are constructors of alternatives, are an example and lesson of an organization in defense of Mother Earth. We are people of faith in movement in many places and many forms. There is agreement that Pueblo Creyente has to do with those who have faith. We have eagerness for the fight for freedom and an economy that benefits the peoples and unites us in a common struggle. We complete 25 years walking with a prophetic voice.

The words of Pope Francisco in San Cristóbal inspire us:

The law of the Lord is perfect for everyone and comforts the soul, a law that helped the People of God to live in the freedom to which they had been called; a law that wanted to be the light for his steps and to accompany the pilgrimage of his People. A people who have experienced the slavery and despotism of the Pharaoh, who have experienced the suffering and mistreatment until God says: Enough! We have seen the affliction; I have heard the cry, I have known its anguish (cf. Ex 3, 9).

We denounce the death projects:

There is violence and dispossession of the Land, the Territory and the natural resources, cutting down trees. Megaprojects: Super-highways, eco- tourism projects, mining, dams, wind farm, gas, oil, and the destruction of ecosystems. There is privatization of resources, high fuel and electricity prices, as well as agro-chemicals and, in particular, water pollution. Transgenic seeds. Agrarian reform. Mono-crops.

In politics we denounce: the deceptions of the Political Parties, the sickness of power, the government projects, structural reforms, corruption and impunity, the government’s lack of listening to social demands, the oppression and repression from authorities and that we are not taken into account in the elaboration of laws. We believe that “public servants” should not be servants of their own interests. We further denounce the structural reforms, the TLC, the legalization of dispossession, the violence and the impunity. We are against the PROCEDE that finishes with our ejidos.

In the social we denounce the divisions the machismo the violence and exploitation of women, the misuse of the Internet, the use of pharmaceutical medicine and no longer traditional medicine, the sale and consumption of drugs and alcohol. We denounce the government that has used youths for local drug dealing and consumption of drugs as a strategy, the junk food, the shortage of water due to privatization of the water, the projects and reactivation of the hydroelectric dams, the infiltration and creation of groups to break up the people’s struggle, the oil wells and the physical illnesses.

We also denounce the social diseases: family violence, prostitution, organized crime, hunger, violation of the human rights of migrants and the abuse, extortion on the part of immigration authorities, police and the Army because they are linked with organized crime. We denounce divisions by other religions, militarization of our territory, infiltrating of the groups in power, organized crime, the lack of jobs and public services, the dismantling of health services and the shortage of medicines in hospitals. We denounce those who use our sisters and brothers as cheap manual labor in companies in the north of our country that work in conditions of slavery.

As Pueblo Creyente we propose:

Constructing autonomy in our communities, recuperating our government structure. As Pueblo Creyente we are not a specific organization, as Mexican citizens we have legal rights and spaces for constructing our political and economic alternatives. We need to maintain our resistance to the projects of death and recuperate our autonomous, community governments.

Facing the 2018 elections, the political parties are already going into the communities controlling and organizing their people. We urge society not to sell out. We fight for our dignity and for the truth, which we won’t sell out. Oxchuc is an example of this process.

As Pueblo Creyente we are defending la Mother Earth and territory with our way of life and through pilgrimages and prayers. We organize and inform ourselves through the alternative media. There are processes of taking conscience of reality.

The projects of life we are constructing are: unity, awakening of conscience, dignified life, autonomy, self-government, fraternity, articulation, alternatives for social construction, native seeds, food security-autonomy, an government for the community, freedom, resistance, the word of our ancestors, true life, the power of the people, a common house, caring for all the plants, animals and other species and Justice.

We urge other peoples to unite because it’s necessary to join with us for our people and our territory, not to be afraid of approaching us, because fear is a tool of capital to paralyze us; we are encouraged with the words of Pope Francisco: “one must mobilize.”

*This would seem an important announcement. Pueblo Creyente/Believing People are Catholic people of faith in the San Cristóbal de las Casas Diocese, a large and heavily indigenous diocese encompassing all of Eastern Chiapas. The announcement that they will construct autonomy (self government) in their communities looks like a move in support of the National Indigenous Congress’ decision to form a (national) Indigenous Government Council.