The Chiapas Support Committee of Oakland, California announces a Delegation to Chiapas, Mexico.   We hope you will join us to explore the autonomous parallel government being constructed in Zapatista communities.

On January 1, 1994, the Zapatista National Liberation Army (EZLN) rose up in arms against the government of Mexico and took control of large expanses of land owned by cattle ranchers. Thirteen days later, the Zapatistas declared a truce and began the process of developing autonomous government for the communities on the land they now controlled, and told the official government to stay out. The Mexican Congress enacted the truce into law. Since then, the Zapatistas have been constructing another world, one characterized by regional self-government, collective economic projects, the full participation of women, autonomous education and health care centers. They call their project autonomy.

The Good Government Boards (Juntas de Buen Gobierno), referred to in Chiapas simply as Juntas, are the revolutionary centerpiece of Zapatista civilian government. They are the regional governance centers and represent the highest civilian authority in each of the 5 Zapatista regions. Launched in 2003, the Juntas are located in regional centers, called Caracoles, where visitors enter the region, disputes are resolved and economic development is distributed fairly. Every 3 years, each autonomous municipality within the region elects representatives that take turns serving on the Junta. Each region has developed its own education system with trained promoters of education (teachers), and autonomous schools. (Autonomous means no involvement with the official government.) All regions have primary schools. Several regions have middle schools. Each region has developed a health care system with community members trained as healthcare workers that practice in the communities, the municipal capitals and in the Caracoles. Each region has a large clinic, a pharmacy, herbal medicine, laboratory and women’s health services. Surgeries are performed in several large clinics/hospitals.

The indigenous peoples of Chiapas and Mexico confront a design by multilateral organizations such as the World Bank and the IMF to re-colonize indigenous territory for exploitation by transnational corporations. The Zapatistas live in resistance to the Mexican government and are committed to resisting the corporate acquisition of their lands and natural resources. Many indigenous communities throughout Mexico joined together in the National Indigenous Congress (CNI, its initials in Spanish) to resist the projects that threaten their lands and communities. Hydroelectric dams, soft drink bottling plants and upscale tourist facilities threaten water supplies. The exploration and extraction of oil and minerals by mining companies threaten displacement and the poisoning of both land and water. Some communities fear displacement and soil depletion from mono-crop agriculture, such as biofuels. They are looking for a way to control and protect their communities, their territories and their natural resources. They are the first line of environmental defense.

On January 1, 2017, the National Indigenous Congress (CNI, its initials in Spanish) announced the adoption of a proposal initially made by the EZLN, also a member of the CNI. The proposal is to form an Indigenous Governing Council on a national level; that is, a parallel autonomous government for Mexico! The CNI also adopted the proposal to run an indigenous woman from the CNI as an independent candidate for president in Mexico’s 2018 elections! These measures are in response to the projects and corporations that threaten the very existence of their communities, their way of life and the environment.

This delegation will visit Zapatista communities, including the Caracoles of Oventik and La Garrucha to meet with members of the Good Government Juntas. We will also receive briefings from Chiapas NGOs on the political climate in Chiapas and Mexico. While in San Cristobal, there will be a little time for shopping and entertainment. We invite you to join us for an amazing learning experience. 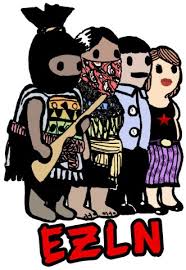 Getting there, cost, etc.

Delegates will arrive in Tuxtla Gutiérrez by plane and then travel by bus or taxi to the colonial city of San Cristobal de las Casas.  Airline reservations are made for Tuxtla Gutiérrez (TGZ), although the international airport is located several miles outside of Tuxtla in Chiapa de Corzo. We will assemble at a hotel in San Cristobal de las Casas on Sunday, March 26. Several days later, when the delegation travels into the communities, conditions will be like rough camping and require both a sleeping bag and a hammock.

Cost of the delegation is US $500.00.  This does NOT include airfare. Nor does it include bus transportation to and from San Cristobal de las Casas and the international airport in Chiapa de Corzo.  It DOES include most food (2 meals per day), lodging (double room) and ground transportation to and from the communities. Your tuition ALSO includes a donation for each community we visit, an honorarium for each NGO briefing we receive, delegation expenses and educational materials, if any. We provide each delegation with experienced group leaders and a translator. Delegation dates are March 26 through April 1, 2017.  [Delegates can arrange to stay in Chiapas longer at their own expense.] We are working on arranging NGO briefings now. When we have arrangements confirmed, we will prepare a day-to-day itinerary and will send it to those who express interest in the delegation.

Who is the Chiapas Support Committee?

The Chiapas Support Committee is a grassroots nonprofit collective founded in 1998.  All of us are unpaid volunteers. We support autonomous development in civilian Zapatista communities in Chiapas. Our current project is to support the construction of schools in the Caracol of La Garrucha. We also process applications for the Zapatista Language School in Oventik and support the production of Zapatista artisan cooperatives. We are an adherent to the EZLN’s 6th Declaration of the Lacandón Jungle and have been organizing delegations to Chiapas since 2001.

The areas we visit in Chiapas are in a “conflict zone.” Although a truce has been maintained for 23 years, there are still military bases and “paramilitary” groups within the zones of Zapatista influence. Any existing conflict is almost entirely between unarmed Zapatista communities and armed civilian groups referred to as “paramilitary.” Violence has not been directed against foreign visitors. Compared to the Drug War violence in other Mexican states, Chiapas is generally peaceful. Nevertheless, it is classified as a “conflict zone,” which means that conditions are not entirely predictable. Delegates travel at their own risk.

Please email cezmat@igc.org, requesting an application. Act now! There are only 8 spaces on the delegation, so the sooner you send in your application the better. We must receive all applications by February 28, 2017.   A deposit of $100 is required with your application in order to reserve a space.  Balance is due March 5, 2012.  For those who want more information, just email your questions to mailto:enapoyo1994@yahoo.com