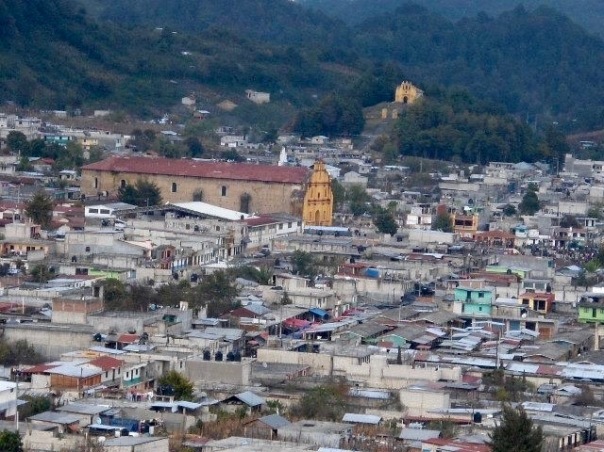 Aerial view of the town of Oxchuc, the capital of Oxchuc municipality, located in the Highlands of Chiapas, Mexico.

With marches, public assemblies, dance, food and sports activities, for two days, thousands of indigenous Oxchuc residents, celebrated the “Day of Civil Resistance” in that municipal capital, to remember that January 8, 2016 on which hundreds of state police attempted to enter the municipal capital but were repelled with a negative result for the police.

During Saturday and Sunday, residents of some 97 communities and the 22 neighborhoods in the municipal capital congregated to remember that pitched battle, which they called a “historic gesture,” that they had with some 700 police that tried to enter the town to subject them.

The town of Oxchuc maintains a civilian resistance against the mayor elected in July 2015, María Gloria Sánchez and that the Electoral Tribunal of the Judicial Power of the Federation (TEPJF) ratified; they accuse her of having won buying votes, manipulating and coercion of the vote during the elections to prolong the political boss system in that municipality that she maintains with her husband Norberto Sántiz.

In a plebiscite residents elected Oscar Gómez López, who although the local government already recognized him, the state government obliges him to install María Gloria Sánchez in his position because of a TEPJF resolution.

January 8, 2016 was marked in the history of Oxchuc, the bravery with which everyone went out in the streets to confront the state police. Minutes before, state police had detained 38 Oxchuc leaders during a negotiating session in San Cristóbal de Las Casas.

When the state police entered, residents burned a dozen buses and patrol cars and provoked more than 50 injuries. The residents also captured 27 state police, among them eight women, as well as the Oxchuc judge for Indigenous Peace and Conciliation, Rogelio Sántiz López, and four of his sons and two little boys.

The Oxchuqueros (residents of Oxchuc) used the captured state police and civilians as hostages to demand the freedom of their 38 leaders. Therefore the state government had to accede immediately to the demand.

Last Saturday and Sunday, Oxchuqueros went into the streets to march, held a huge assembly with representation from the 97 communities and the 22 barrios of the municipal capital. There, they ratified Oscar Gómez López as their mayor-elect through uses and customs.

In an interview, Mayor Oscar Gómez López demanded that the state government and particularly the Treasury Secretary, release the Oxchuc municipal council’s bank accounts, because the situation has already reached a point at which it’s not possible to support some expenses they must make, like paying police, repairing patrol cars and buying gas.

Also, thousands of men, women and children are affected by the lack of ambulances, because these already are lacking or rather there is no longer any fuel for taking out the sick and injured from the more than 100 rural communities.

Gómez López said that the people have made the decision to block that stretch of highway again on January 18, to demand that the state government release the frozen bank accounts; and if they are not released they will block that highway stretch until they are heard. [1]

Blocking Oxchuc is a crisis for the state government because it paralyzes the economy, the movement of tourists and the local population that travels from the Highlands to the Jungle Region and the Northern Zone of Chiapas.

Gómez López said that the people of Oxchuc remain firm in maintaining him as mayor-elect through uses and customs and that in no way will they permit the return of the political bosses María Gloria and Norberto.

[1] Oxchuc residents maintained a roadblock on Wednesday and Thursday (January 18 and 19) to demand that the state government release the city’s bank accounts, because thousands of inhabitants are suffering the consequences of the lack of public resources like water, public services like garbage collection, security and patrolling, and health care and other matters. The state government and the members of the Permanent Commission for Peace and Conciliation, the body that heads the civil resistance movement against the region’s caciques, reached an agreement and they lifted the roadblock. In the evening, after lifting the roadblock, residents of Oxchuc heard shots fired into the air and believe they came from groups that support María Gloria. There is concern about an outbreak of violence in the town and in the municipality. http://www.chiapasparalelo.com/noticias/chiapas/2017/01/temen-enfrentamiento-en-oxchuc/

← Learning to govern ourselves
The gasolinazo and the protests →

One Comment on “Oxchuc Celebrates the “Day of Civil Resistance””