Learning to govern ourselves 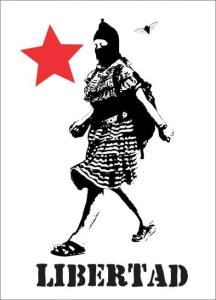 The storm rages; cold and hurricane-force winds threaten from the north, which will be accentuated after next Friday, January 20, and a cyclone forms level with the land all over the country. There is nowhere to take shelter.

There are those who seek refuge in the dominant system. They think that doing so is realistic. They consider it romantic or utopian, for example, to openly challenge capitalism. Likewise, although they know that the state apparatuses are falling apart, dragged through the storm, and that the people distrust the parties and the electoral process more all the time, they hang all their hope on 2018. They think that circumstances will finally make it possible for their permanent candidate to win the elections; they are confident that, once in power, he will fix everything fixable.

They saw with disgust the decision of the National Indigenous Congress (CNI) to create a government council that will express itself in the voice of an indigenous woman, who will be an independent candidate in the presidential elections. They circulate new racist and sexist comments to disqualify the decision. They also warn that the decision will divide what is still called “the left” and will benefit the candidates who administer what remains of the government.

Debate has been scarce. Democratic dogmas are launched over rebel heads like projectiles. There is resistance to abandoning the dominant mental framework, although evidence and experiences that it’s not sensible or realistic to take refuge in the remains of the institutional shipwreck multiply.

Along with that dogmatic nonsense, probably unyielding, disagreement and confusion also spread. It’s not easy to escape from the dominant habits. For el CNI, for example, it will not be easy to constitute the government council from below cleanly. Different small groups are already mobilizing to insert their cadres into it. They perceive it as a body with power from which they will be able to impel their agendas, which embrace very diverse points on the ideological spectrum.

The challenge that we confront obviously demands a kind of imagination to which we are not accustomed. It implies, first of all, recognizing that far from escaping from the storm and seeking provisional shelters, it’s necessary to submerge oneself in it. There, from the inside, we will be able to realize that candidates, parties or even the dominant structures form part of our strategic adversary, which we still call “fascism,” and they nourish the “fascist” that we carry inside, hidden in the desire to be governed.

The patriarchal mentality, rooted in the course of millennia, makes it very difficult to conceive the world without hierarchies and structures of control. Upon warning that without them we would fall into chaos, they deny the fact that we are in current disorder because of them; the illusion of governing ourselves through representatives deepens the chaos instead of remedying it: it pushed us to the abyss of violence and decomposition in which we find ourselves.

It’s easy to talk about what we’re dealing with: governing ourselves: that we are capable of managing our own lives, nothing more nothing less. It turns out to be difficult because we are infected with the subordination virus: we allow publicists, business people, bankers, leaders, the Internet and almost anything or anybody to govern us. We believe that it’s freedom and democracy to decide between the choices that the system presents us, between brands of soap or between candidates or parties. And the “fascist” that we carry inside is constituted.

There are places and spaces in which the people have not stopped governing themselves since millenniums ago. We must not idealize them; there one also observes patriarchal impositions and habits of domination. But the practice exists. A certain number of people are still born in contexts in which many aspects of daily life are the fruit of common agreement. In questions of enormous importance to people, heteronomy, regulation by others, can be kept at bay

Although the majority isn’t accustomed to governing themselves, the impulse is profound and general. Nobody needs training to do it. It starts at home, when we create conditions so that the whole family, including small children and elders, may participate in the decisions that affect everyone. It passes from there to the condominium, the street, the district, to all the spheres of the reality in which each one moves.

Examples of how to change the pattern of behavior that makes us desire someone to govern us exist everywhere. In San Cristóbal, for example, a city that was not constructed for automobiles, traffic lights and police govern traffic… with bad results. The “one by one” device in which the drivers themselves govern the crossing of each street has demonstrated the advantages of self-governance.

On that path we are able to discover that the country still has immense reserves of autonomous wisdom. In popular sectors that collective possibility of self-government has been a condition of survival. And if we deal with the storm in that way, practicing our own forms of self-government at all levels, organizing ourselves for that, we will be prepared to do what we have to do inside of 18 months.