Posted on May 30, 2016 by Chiapas Support Committee 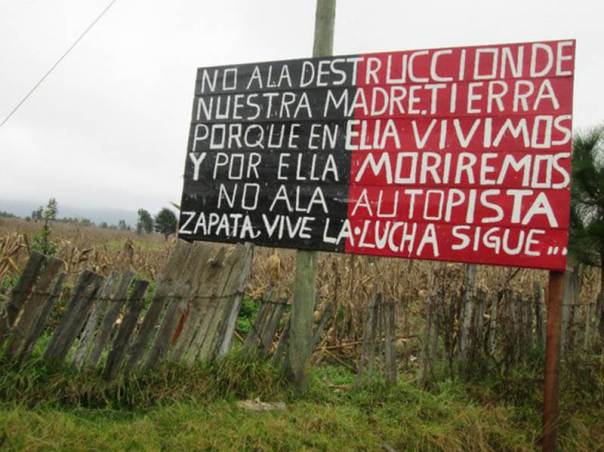 No to the destruction of our mother earth because we live on it and we die for it. No to the Superhighway! Zapata Vive! La Lucha sigue!

From the Editors of Desinformémonos

The amparo [1] against the San Cristóbal de las Casas-Palenque superhighway project, in Chiapas was granted to the Tsotsil community of Los Llanos last January 18 after imposition under government threats and intimidation over the construction of the highway, by means of the municipal council and the secretary general of government in Chiapas since November 2013, residents of the Los Llanos ejido and San José El Porvenir reported.

The community stressed to authorities of the three levels of government that their land is not for sale, not “at present or in the future,” besides stressing their rejection of the highway project that dispossesses the indigenous communities of what’s “most sacred in this life:” the land.

Besides, they reported that in fulfillment of the constitutional and international norms, and stipulated in the sentence, the authorities are obliged to respect the right of free, prior and informed consultation through the traditional representatives and leaders of the community, to thus provide complete information that contemplates the environmental and health risks that derive from the project.

“We are natives of these lands, our grandparents were born here and died here, therefore we demand respect for the life of our community and of all the indigenous peoples that are threatened with being dispossessed by private and government interests in exploiting their natural resources,” pointed out the residents of Los Llanos, who invited all the communities and peoples to continue organizing in defense of territory to not fall into divisionism.

Finally, the ejido demanded respect for all the rights of the indigenous peoples recognized in the Federal Constitution, international treaties and in the San Andrés Accords.

[1] An amparo is a court order granting protection to someone against something. It functions like a permanent injunction.

[2] This court order does not affect other municipios (counties) located in between San Cristóbal and the city of Palenque; such as, Oxchuc, Ocosingo, Chilón, Salto de Agua and Palenque; the court order would, however, seem to set an important precedent regarding prior, free and informed consultation.

Originally Published in Spanish by Desinformémonos