AFTER 19 YEARS OF DEFENDING THEIR LAND, PROVOCATIONS CONTINUE AGAINST SAN FRANCISCO TEOPISCA, AN ADHERENT TO THE SIXTH 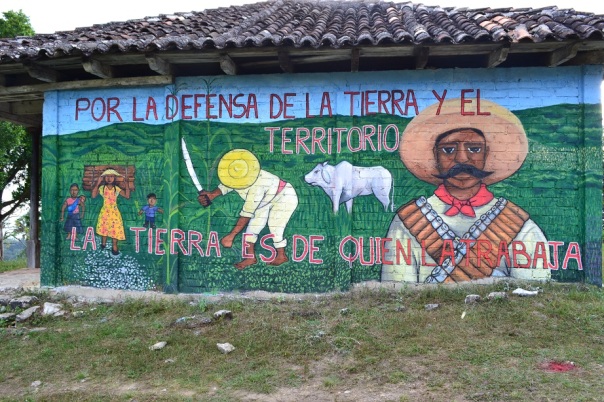 “We place responsibility on the 3 levels of government for what can happen to any one of our compañeros for not giving priority to our land demands that we demand as campesinos. We also place responsibility on Señor Pedro Hernández Espinoza for any physical harm that any of our compañeros may suffer.” (Campesinos and campesinas of San Francisco, municipio of Teopisca, Chiapas México, January 10, 2016.)

To the adherents to the Sixth Declaration of the Lacandón Jungle

To the alternative communications media

To the human rights defenders

To national and international society

We are a group of men and women adherents to the Sixth Declaration of the Lacandón Jungle since 2009, when we started in the struggle as the Other Campaign. Currently, we are part of Semilla Digna (Dignified Seed), which is a group formed by communities of the Sixth in Chiapas, belonging to the CNI. Our struggle is the defense of land and territory.

In 1995, we campesinos started to take steps with the state government of Chiapas to legalize the piece of land called “El Desengaño,” approximately 170 hectares (421 acres) owned by Pedro Hernández Espinoza. But the government never gave us a solution to our need for land. Much time passed and we saw that it was impossible that the government would attend to our request. We decided to occupy these lands because we have the legitimate right being the original peoples and the right to free determination as Convention 169 of the ILO points out.

We have been defending these lands for 19 years, organizing men and women and after several years we decided to formally work these lands. In 2012, we placed a banner on which it says that these lands are ours for the reasons mentioned on March 24, 2014. We placed various hand-painted signs (letreros) to declare and demand our legitimate right. On July 19, 2014, we declared ourselves to be in formal possession of “El Desengaño.”

On September 24, we campesinos once again pronounced that we would continue working it. We, the campesinos of this San Francisco group, have been looking for the most kind and peaceful way to dialogue with Señor Pedro Hernandez Espinoza. We have extended various invitations in various ways, but he never accepted or fulfilled any invitation we made. Now, Señor Hernández Espinoza animals are kept in a smaller space and we gave him 5 days to come and take them out, because we hold to our word that we don’t want the animals, WE WANT THE LAND.

Adherents to the EZLN’s Sixth Declaration

Members of the National Indigenous Congress

NEVER MORE A MEXICO WITHOUT US

← Zibechi: From the Bagua Massacre to autonomous government
Mexico suffers an epidemic of disappearances →