Zibechi: From the Bagua Massacre to autonomous government

The formation of Peru’s first autonomous government, on Sunday, November 29 in Soledad community in the Río Santiago District, in the Amazon Province, is the fruit of a long history of frustrations and struggles. That day, 300 representatives from 85 Wampis communities installed their self-government as a way to defend 1.3 million hectares (3.2 million acres) of forests from the extractive multinationals.

They elected the first president of the autonomous territorial government and the 80 members of their parliament, which is to be installed in February. The newspaper Lucha Indígena (Indigenous Struggle), directed by Hugo Blanco, advanced the news in its July edition pointing out: “Appealing to autonomy as a way of solving problems is something novel in the country, but it is present in various indigenous nationalities of other countries. We hope that this will be the start of a new way of behaving from our social movements.”

The immediate background for the installation of the autonomous government was the Wampis Summit on Integral Territory and Autonomous Governance held last June 29-30 in Nueva Alegría community, where 120 representatives of the communities close to the Morona and Santiago Rivers met, in Northern Peru near the border with Ecuador. In that meeting they debated the internal situation of the Wampis people, approved the Autonomous Statute of Territorial Government of the Wampis Nation, designated a commission for the constitution of the government and presented the project of the biological corridor in their territory.

The nine-page document is the traditional text of the indigenous peoples, where below three pages of print appear another six replete with signatures, seals and even fingerprints that put the mark of approval on what was agreed, community by community, completing the ritual of big decisions. It’s a sample of the democracy of those below.

In the first part, the document titled “Act of Validation of the Autonomous Statute of Territorial Government of the Wampis Nation” analyzed the weaknesses in the communities and organizations. It emphasizes the threat that the presence of oil, mining and lumber companies represents to the people, and defends the union for “asserting our rights with the State and the private sector.” The Statute approved consists of 61 articles and three temporary articles whose contents were amplified during the debate, while others were left out.

Among the agreements figures the rejection of the entry of extractive companies without consultation, “not permitting that other indigenous organizations continue emerging since we are preparing to install our own government structure.” This exclusion is justified in the affirmation of sovereignty and self-determination in the face of State’s interference, international cooperation and the NGOs that usually promote the formation of organizations outside the control of the communities in order to weaken the indigenous nation’s project.

Finally, the meeting set the dates of November 28 and 29 for installing the autonomous government, as effectively was done.

The distant background implies going back to the decade of the 1970s when the Aguaruna-Huambisa Council, made up of Awajún and Wampis (names in the language of these warring communities), was formed around 1977. That signified a profound change in the history of the peoples. Representatives of the communities coming from the Cenepa, Nieva, Marañón and Santiago Rivers went to the first General Assembly.

It was the first occasion on which both peoples overcame their historic rivalry to confront external threats. Later would come a long period of resistances more or less open, more or less implicit, as so many native peoples of this continent have lived.

On June 5, 2009, a massacre took place against the Awajún and Wampi that had been mobilizing against decrees of the Alan García government that delivered their wealth within the framework of the FTA with the United States. The government sent the armed forces to dislodge a peaceful protest that lasted 57 days focused in the jungle regions of five departments (states): Amazonas, Cusco, Loreto, San Martín and Ucayali. Three MI-17 helicopters flew over the highway that joins the jungle with the Pacific at Devil’s Curve, which some five thousand Awajún and Wampis occupy. They launched tear gas at the crowd the (although other versions say that they also fired machine guns) while police attacked the blockade on land, firing their rifles. 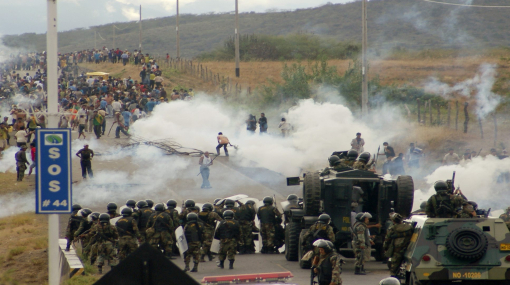 Police officers take up positions against native people in Bagua province June 5, 2009. The death toll rose on Saturday after Peruvian security forces battled native Indians in clashes that highlighted opposition to exploration in the Amazon and could threaten Peru’s investor-friendly government. Nine police officers held hostage by the protesters were killed and another 22 were freed by troops in a rescue operation, National Police Chief Miguel Hidalgo told Peru’s RPP radio broadcaster. He said seven other hostages were missing. Picture taken June 5, 2009. REUTERS.

The decision to form their self-government can be a decisive step for Peru’s popular struggles. In the case of the Wampis it seems the corollary of a long path on which they comprehended that you can’t expect anything from those above.

Originally Published in Spanish by Desinformemonos

2 Comments on “Zibechi: From the Bagua Massacre to autonomous government”