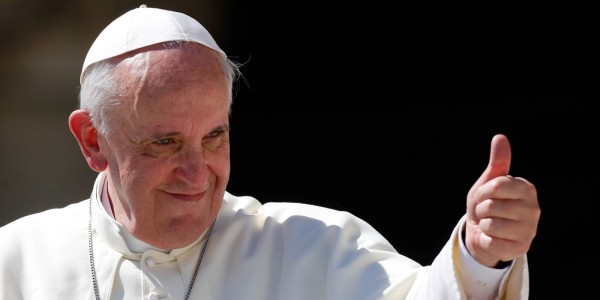 Pope Francisco gives his thumb up as he leaves at the end of his weekly general audience in St. Peter’s square at the Vatican, Wednesday, Sept. 4, 2013. (AP Photo/Riccardo De Luca)

This afternoon, the Archdiocese of Tuxtla Gutiérrez confirmed the visit of Pope Francisco to Chiapas, where he will live and will send a message to indigenous peoples and migrants from this southern border of the country.

Father Edilberto Pérez Vicente, coordinator of the Pope’s visit to Tuxtla announced in a press conference the official communication of the Mexican Episcopal Conference (CEM, its initials in Spanish) and confirmed that the Supreme Pontiff will be in Tuxtla Monday, February 15, 2016.

The “Missionary of Mercy and Peace,” as they call Pope Francisco, will arrive on a flight coming from Mexico City at the Angel Albino Corzo International Airport; from there he will fly in a helicopter to San Cristóbal de Las Casas.

At 10:15 in the morning he will officiate a mass with indigenous communities that will come from the different regions of the state, and it is hoped also from other corners of the country and from Central America.

It will be here where he is expected to make a pronouncement directed to the indigenous peoples and the migrants that cross this border on their route towards the country’s north.

After the mass he will eat with representatives of the indigenous peoples.

At 3 PM he will visit the San Cristóbal de Las Casas Cathedral, where se the tomb of Bishop Samuel Ruiz García is located.

Pope Francisco will fly in a helicopter to Tuxtla where he will head the “Meeting with Families” in the Víctor Manuel Reyna Stadium at 4:15 PM.

This would be the second visit of a Supreme Pontiff of the Vatican to Chiapas; the first was Juan Pablo II on May 11, 1990.

Pérez Vicente said that the Apostolic Journey to our country from February 12 to 17 next year, in the framework of the Extraordinary Jubilee of Mercy.

He said that the Pope’s presence would be to make a call to dignify life, as has always been his work. He added that they are prepared to receive some 100,000 in the San Cristóbal de Las Casas Municipal Sports Center and some 80,000 in Tuxtla.

Re-published with English interpretation by Compamanuel.com