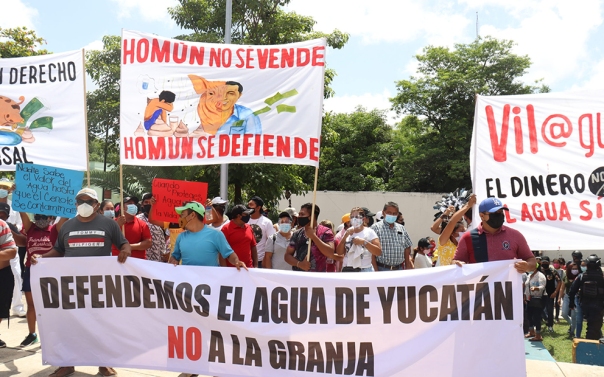 Another victory for the Maya people of Homún: Second District Judge Rogelio Leal Mota applied international standards in matters of consultation with an indigenous population and the precautionary principle, and decided to maintain the suspension of operations that was imposed on the mega pig farm; in other words, the pig factory will remain closed until the amparo lawsuit brought by Homún children concludes.

Upon resolving the action for revocation of suspension brought by the Pork Food Production (PAPO, Producción Alimentaria Porcícola), Judge Leal Mota determined that said company did not provide evidence of new facts that “would knock down” the three pillars that sustain the suspension imposed on the pig factory: the first one, that the wastewater treatment plant was not finished at the time of initiating operations; the second one, that no prior consultation of the Maya population of Homún was done; and the third one, that given the risk that the operation of the farm could affect the environment and therefore, the precautionary principle must be applied.

Regarding the first pillar, related to the wastewater treatment plant, the Judge explained that the evidence provided by PAPO, a document issued in April 2021 by the Secretariat of Sustainable Development (SDS), is not new, since it’s based on past acts: it only says that in 2017 the then Secretariat of Urban Development and Environment Medio Ambient (Seduma), considered the treatment plant viable at the moment of authorizing the Environmental Impact Statement (EIS), for the pig factory. In addition, no expert or scientific examinations that guarantee that said plant will avoid air pollution or other environmental impacts.

Regarding the second pillar, the company assured that in its time, the Seduma published the EIS on the mega farm in the Official Gazette of the State Government of Yucatán. It also alleged that the Secretariat of Sustainable Development (SDS), does not have an obligation to carry out an indigenous consultation.

The Judge responded that the public consultation held by the Seduma is not equivalent to an indigenous consultation, which, according to international regulations, must be prior, informed, culturally appropriate and in good faith respecting the right to autonomy of the Maya people and for the purpose of obtaining the consent of the people.

“There is an obligation the authorities have (within their jurisdiction), to protect the fundamental rights of the indigenous peoples and communities that require guarantying the exercise of certain human rights of a procedural nature, principally the rights of access to information, participation in making decisions and access to justice,” therefore, it’s not about a “generic consultation,” but rather an indigenous consultation respecting international standards regarding the rights of the indigenous peoples, the Judge pointed out.

Regarding the precautionary principle, it was clear that the PAPO company was also unable to verify that the conditions exist to affirm that the precautionary principle is overcome, because not only soil and water pollution must be considered, but also air pollution. In addition, international standards on the matter must be observed and, given the lack of scientific certainty and the uncertainty about pollution, there is an obligation to prevent all serious or irreversible damage.

PAPO was unable to prove any novel fact in relation to the three pillars for which the suspension was granted, and therefore, he decided to maintain said precautionary measure. The resolution of Judge Leal Mota is crucial for the Maya peoples of the Peninsula who face extractive industries that impose projects on their territory and put their health, water, air and the environment in general at risk. It’s important to highlight, as the Judge himself mentioned, that the principal lawsuit still continues.

The Maya people of Homún will remain vigilant and on alert, especially considering that the evidence used by PAPO, in all attempts to eliminate the suspension, have had in common the participation of the State Government of Yucatán through the Secretariat of Sustainable Development, arguing that the wastewater treatment plant is already finished.

Meanwhile, the population of Homún urges the Yucatan State Government to not be an accomplice of the PAPO company and to respect their right to self-determination.

Representatives of Childhood in Homún

Originally Published in Spanish by Indignación, April 19, 2022, http://indignacion.org.mx/una-victoria-mas-para-homun-mega-granja-de-cerdos-permanecera-cerrada/ and Re-Published with English interpretation by the Chiapas Support Committee