Caravan supports the struggle against the Huexca thermoelectric plant 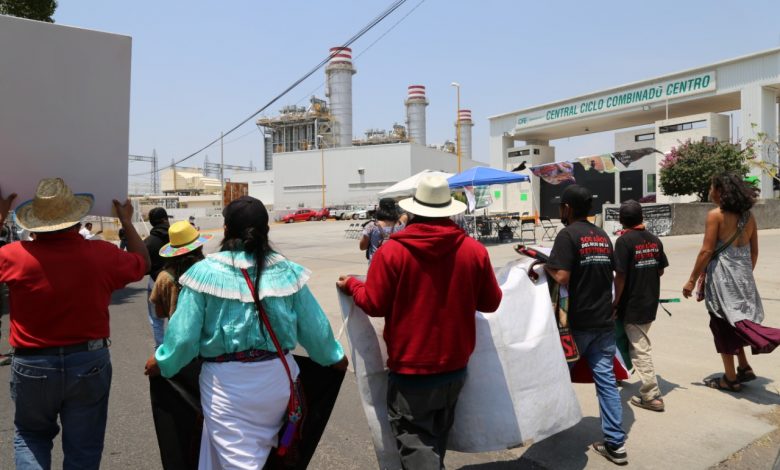 Coming from Puebla, the Caravan for Life and Water, with support from the Peoples’ Front marched yesterday in the indigenous town of Huexca, Morelos, in rejection of the diversion of the Cuautla River to the CFE thermoelectric plant. Photo: Rubicela Morelos

As they passed through Morelos, members of the Caravan for Life and Water, supported by the Peoples’ Front in Defense of Land and Water, symbolically closed the thermoelectric plant located in the indigenous town of Huexca, which makes up part of the Morelos Integral Project (PIM), with the argument that it will finish off that resource, water, with activity in the fields and will harm the environment.

The caravan, which left from the municipality of Juan Bonilla, Puebla, on March 22, when International Water Day was commemorated, arrived late Sunday evening at the occupation that ejido members opposed to the project maintain at the offices of the Association of Users of the Cuautla River (Asurco), in Ayala, in the context of the 103rd anniversary of the death of General Emiliano Zapata.

In Ayala, the activists demonstrated in favor of the farmers’ struggle so that the waters of the Cuautla River are not taken away to the thermoelectric plant of the Federal Electricity Commission (CFE).

Yesterday morning, the caravan moved to the community of Huexca, municipality of Yecapixtla, where together with members of the Peoples Front in Defense of Land and Water marched through that town. They reiterated their opposition to the thermoelectric plant project, which began in 2012, because, they assured, “it will end their campesino life, their water and human, animal and plant life.”

They chanted slogans like: “The water’s not for sale, it is loved and defended!”; The water is a treasure that’s worth more than gold!”; “It’s not drought, it’s looting!”; “Water yes, ‘Thermo’ no!”; “Water is life and life is defended!” and “Life is not negotiated with a consultation!” They criticized that before there was water in Huexca 24 hours a day and now only during the day.

The march concluded with a rally in front of the thermoelectric plant, located at the town’s entrance. There, opponents of the project hung a banner that said: “Closed by the peoples,” since “it has been imposed with state and federal police by the bad governments, but we don’t want this project of death,” Teresa Castellanos, a resident of Huexca, maintained.

She recalled that ever since the construction of the thermoelectric plant was announced the community voted against it in assembly. She said that when the current federal government organized a consultation in 2019 to endorse or reject its operation, the “no” vote won in this indigenous town. Castellanos said that the plant has not been put into operation because “it’s junk” and in this area of Morelos “there isn’t enough water for it to operate.”

They have toured 8 states

Alejandro Torres, an activist from the Las Cholulas region in Puebla, a member of the Caravan for Water and Life, said that they have toured the states of Querétaro, Morelos, Oaxaca, Mexico City, state of Mexico, Veracruz, Puebla and Tlaxcala.

He detailed that 50 water defense organizations, both national and international, have participated in the mobilization and on their way through said states “we have found a lot of resistance to megaprojects that will do away with the water and the environment.”

He explained that: “the objective of the caravan is to make visible the dispossession of water that they are doing to the Native peoples, to meet each other, partner and together create a stronger national and international front to stop this war that is dispossessing us. “Together we must avoid all the devastation because we are in hot spots at the international level on the question of climate change and it’s time to generate a collective awareness to stop all this assault,” Torres warned.

Originally Published in Spanish by La Jornada, April 12, 2022, https://www.jornada.com.mx/2022/04/12/estados/025n1est and   Re-Published with English interpretation by the Chiapas Support Committee