War and chaos above; resistance and dignity below 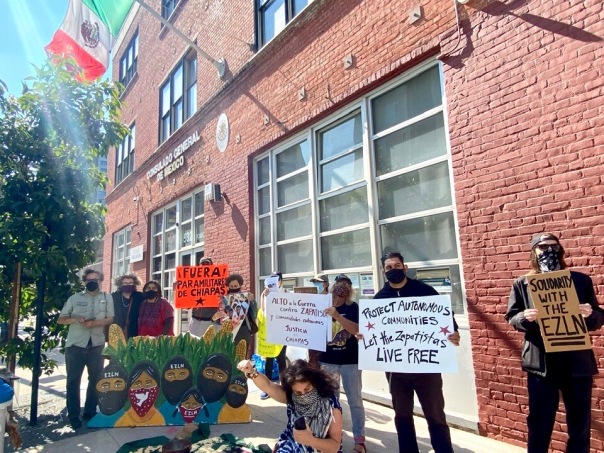 Above Photo: September 24, 2021 demonstration in front of the Mexican Consulate in San Francisco, California.

From a distance, it isn’t possible to contribute analysis as precise and fitting as those that appear in the EZLN communiqué of September 19, “Chiapas on the brink of civil war,” nor embroidery of facts like those in the great article of Luis Hernández Navarro, “The Chiapas Hell.”

I would like to frame the aggression against the Zapatista support bases, in particular, and the native peoples of Chiapas and of other geographies, in general, within the strategy of “perpetual war” defined by the Pentagon, which is currently unfolding with tremendous destructive capacity.

Counterinsurgency has mutated as much as war. In Vietnam, the Pentagon created “strategic hamlets,” where it incarcerated 8.5 million campesinos, 55 percent of the total population of South Vietnam (https://bit.ly/3kwjmxm). It was the way to isolate the guerrilla in order to prevent them from moving like “fish in water,” according to Mao’s assertion.

In the current wars it’s not a question of “taking the water from the fish,” as was done until the defeat of the United States in Southeast Asia, but rather a question of muddying and poisoning the water so that no one can live in peace, and so that capital continues to “creatively” destroy territories and peoples in order to continue accumulating.

The first thing to keep in mind is that war stopped being a means and has become an end. Before, wars tried to defeat enemies to install a peace that would permit the continuity and fluidity of the accumulation of capital. Now, war is the end, because capital accumulates by dispossessing, robbing and destroying.

The engineers of war are those who have a clearer, starker and cruder vision of the needs of capital and of empire to continue being the dominant power, and not going backwards. Lieutenant Colonel Ralph Peters, in a transparent text like “Constant conflict,” published in the military magazine Parameters in 1997, teaches about the Pentagon’s conceptual brutality (https://bit.ly/39pEHBY).

Democracy is just “that clever liberal form of imperialism.” Peters recommends the dirty war for maintaining domination, and emphasizes that: “there will be no peace,” since “for the rest of our lives there will be multiple conflicts in mutant forms throughout the world.”

The Pentagon’s “perpetual war” seeks “to keep the world safe for our economy and open to our cultural assault,” with a well-informed military capable of “denying military advantages to our opponents.” It’s evident that when capitalism became synonymous with war, military thinking is what defines the modes of acting and the steps to follow.

The accuracy and lucidity of these analyses cannot be denied, as repugnant as they are. “Perpetual war” seeks to eliminate entire portions of the population that they consider excess, as Subcomandante Marcos has analyzed, in the text “What are the fundamental characteristics of the 4th World War?” more than two decades ago.

That war has become the end of the system changes things at the root. The best scenario for comprehending the “perpetual war” is Syria, where there are no better or worse powers, no acceptable regimes or governments; where Kurdish militias defend their people from a wide spectrum of enemies: from the armies of Turkey and Syria to the gangs of the Islamic State and other terrorist groups.

As in Chiapas, these groups didn’t emerge spontaneously, but rather clothed by the State, supported by the most diverse governments, even by those that are called progressive; simply because they are systemic forms of domination; that is, the ways of keeping the capitalists in the position of bosses.

Assuming that war will be for a long historical period, plagued with systemic storms, supposes deciding the type of organization and forms of struggle appropriate to this new situation. If war seeks to install chaos, we must be the principle of order and clarity in our territories. If they want to install the death of peoples and of geographies, we must defend life in all times and places.

Of course, the progressive governments don’t understand the danger because they dream of being able to govern the narco-paramilitary mafias. They don’t perceive that those mafias are disposed to align their weapons against those same governments that look the other way, while they fire at the peoples. When they see the mistake, it will be too late.

Among those below, the first thing is community cohesion and attachment to the territories in resistance. Although we choose to travel the path of peaceful struggle, we are not pacifists and we do not renounce defending ourselves. At a certain point, a “time out” is needed, a collective “ya basta” (enough now) that puts things in their place.

The EZLN’s powerful communiqué alerts us to the proximity of those moments. Each one, in their geography, are alerted.