The mayor of Pantelhó resigns, accused of links to criminal groups 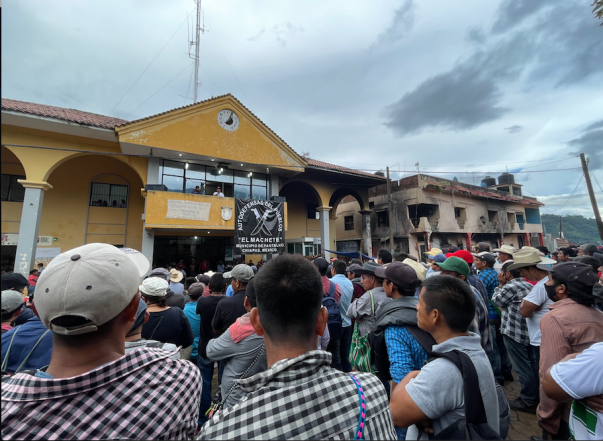 Delia Janeth Velasco Flores, municipal president of Pantelhó, resigned her office amid protests from the population of that municipality, who accuse her and her husband, Raquel Trujillo Morales, the municipal president-elect, of co-participating in criminal groups linked to drug trafficking.

Delia Janeth and the seven members of the municipal council presented their resignations at the request of the Chiapas Government, official sources reported. In order to be effective, the resignation must be processed before the state Congress; this body has not received the resignation document, so she legally still occupies the position.

The Chiapas Attorney General’s Office has not said whether it has initiated any investigation into the complaints against the mayor and her husband so that it can notify the Congress about this case, in order for that body to determine whether the mayor-elect meets the legal requirements to assume office.

Delia Janeth Velasco Flores’ term of office ends this October 1, 2021. Therefore, starting that same day, her husband Raquel Trujillo Morales, who contended for office with PRD [1] registration, would legally have to take office. Consequently, the Chiapas Attorney General must move forward with the investigations into the mayor-elect and his alleged link to illegal activities, in order to notify the Chiapas Congress and have that body determine if he can assume office.

Pantelhó residents also made a request to the Congress and to the state and federal oversight bodies, to audit municipal public resources because there is an allegation that they were used to arm and provide for criminal groups.

Last Friday they held the second day of the dialogues between Chiapas government officials and Pantelhó residents, who decided to form self-defense groups in order to expel people linked to drug trafficking from their municipality. In the meeting, the coordinator of advisors to the Chiapas government, Leonel Reyes, informed residents that Delia Janeth Velasco Flores “will no longer be president of Pantelhó,” without giving more details.

In the meeting between authorities and Pantelhó residents that was held in the municipal seat, currently in possession of residents of the 86 communities and 18 neighborhoods, the community authorities reported that they would elect new authorities via the indigenous normative system, known as usos y costumbres.

The municipality’s residents demand that Raquel Trujillo not assume the office of mayor. “We have an assembly on Monday to elect new authorities. Here we already warned that those people who have attacked the population no longer will be able to return, they should no longer govern,” warned Pedro Cortés López, coordinator of the Pantelhó commission of communities and neighborhoods.

Pantelhó is the indigenous municipality located in the Chiapas Highlands, which formed armed self-defense groups, and last July expelled the mayor and other people accused of participating in drug trafficking and [other] illicit activities from the municipality.

Residents accuse past, present and recently elected municipal authorities, as well as criminal groups, of the murder and disappearance of some 200 people from the place, among them the former president of the Las Abejas of Acteal organization, Simón Pedro Pérez, which occurred on July 5.

← Indigenous Peoples, Narco-Violence and Paramilitarism
They murder the indigenous prosecutor in Pantelhó Case →