Propose an election through uses and customs in Pantelhó 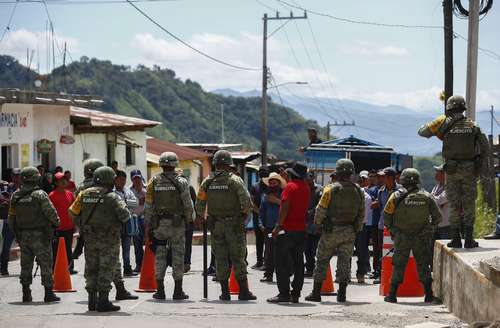 Yesterday morning, they initiated dialogue between the 86 indigenous communities and 18 barrios of Pantelhó and state and federal authorities, military personnel and members of the El Machete Self-Defense group, who guarded the site of the meeting.

Representatives of the 86 indigenous communities and 18 barrios (neighborhoods) in Pantelhó affirmed that during the first dialogue table with state and federal officials held this Tuesday they warned that: in that locality “the bad municipal councils will no longer have a place to govern,” because on October 1st “we will have our new authority” elected through the system of uses and customs.

Pedro Cortez López, coordinator of the commission of 20 people (municipal agents, presidents of ejido commissions and representatives of Catholic and Evangelical churches) named by the communities and barrios, assured that there is no room for the interim mayor, Delia Yanet Velazco Flores, nor the municipal president elect, Raquel Trujillo Morales, both PRD members.

Dialogue in the municipal seat of Pantelhó took place with the mediation of a commission of the Diocese of San Cristóbal, headed by Father Marcelo Pérez Pérez.

Among the points exposed in the dialogue by the so-called Commission of 20 it emphasizes that: “the government recognizes that there is a problem in Pantelhó, the existence of organized crime in the municipal council.” They also demanded justice for the victims of organized crime, to be recognized as original peoples and respecting the naming of authorities through usos y costumbres (uses and customs).

At the same time they demanded an audit of the Pantelhó county council headed by Santos López Hernández –a prisoner in the El Amate prison, accused of sexual assault– and of Velasco Flores that concludes September 30, and that the operation of cantinas and the sale of drugs is prohibited, and also that Velasco Flores resigns.

The private meeting took place in the Francisco Javier Soler Kindergarten, located five blocks from the central park from 11 am to 5 pm. Soldiers and state police agents were posted on both sides of the street, as well as residents.

Pedro Faro, director of the Fray Bartolomé de Las Casas Human Rights Center (Frayba), clarified that representatives of the El Machete Self-Defense group did not participate in the talks, only the authorities from the communities and barrios. “They are showing their faces and they endorse that the El Machete uprising responds to being fed up with the absence of the State, which led to 200 deaths in 20 years, in addition to the dispossession of numerous assets.”

Josefina Bravo, commissioner of the Interior Ministry for dialogue with the indigenous peoples, reported that they agreed that next Friday “we will meet to bring a response to the proposals,” in addition to the fact that we agreed to install thematic groups to address the six points raised.

In an interview, she added that at the end of the meeting members of the commission signed the request for the local Congress and the Superior Auditor of the Federation to review the accounts of the current municipal council.

When asked if the issue of the retention of a score of people on July 26 during the taking of the municipal headquarters, she responded that the Commission of 20 has no information. “We told them that it’s important to know in what state they are found.”

The local deputy Omar Molina Zenteno stated: “We head the six points and the agreement is that there will be another meeting on Friday to give specific responses to each point. Today we listened and received documents.”

Both Pedro Faro and Omar Molina said they didn’t know how many inhabitants have been displaced since July 7, when El Machete irrupted, and July 26, when around 3,000 occupied the mayor’s office and took control of the municipal headquarters.

← Zapatistas join a mobilization of those Without Papers in France
Indigenous Peoples, Narco-Violence and Paramilitarism →