Zapatistas join a mobilization of those Without Papers in France 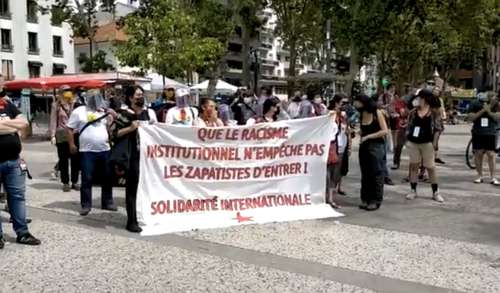 They gathered in the Montreuil neighborhood, in Paris, and toured various shelters.

From the editors of La Jornada

Yesterday afternoon in Paris, France, Zapatista Squadron 421 joined the mobilizations of those Sans Papiers (Without Papers), who demand the legal immigration status of thousands of people in France, Desinformémonos documented on its Twitter page.

At 2:00 pm local time, the Zapatistas accompanied collectives of the movement of undocumented migrants, who gathered in the Montreuil neighborhood to start a tour of three points of refuge and shelters (known as Foyer) for those “without papers,” where migrants coexist who, in the word of NGOs, are sheltered “in deplorable conditions.”

“In the name of all those without papers in France and Europe we owe the most to the Zapatistas,” said one of the movement’s spokespersons, after recalling the phrase: “the people govern and the government obeys” of the Zapatista National Liberation Army (Ejército Zapatista de Liberación Nacional, EZLN).

Accompanied with music, slogans and signs, the Zapatistas and the el Sans Papiers movement demanded from the free entry of all people and the legalization of the immigration status of thousands workers, most in cleaning and other services.

“The Zapatista tour will be completely anti-racist” and “[in] solidarity with the Zapatistas,” shouted the activists and collectives that accompanied the mobilization against institutional racism.

Squadron 421’s accompaniment of the Without Papers march happens after thousands of people in Europe have protested in front of French embassies to demand that the French government allow free entry to the more than 100 Zapatistas, defenders and members of the National Indigenous Congress (Congreso Nacional Indígena, CNI) who will join the Tour for Life on the continent.