Most of those displaced returned to Chenalhó, authorities indicate 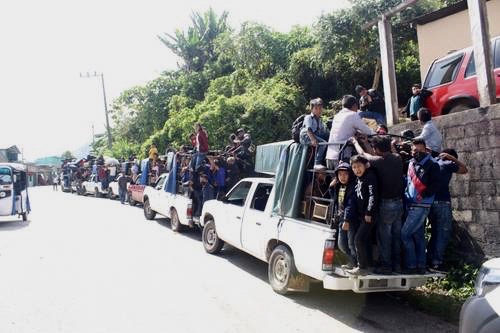 Indigenous people displaced from various communities in the municipality of Chenalhó, Chiapas, were transported back to their communities of origin, after spending two weeks in several shelters located in Acteal Centro. Photo: La Jornada

Between 2,500 and 3,000 indigenous people displaced from communities in the municipality of Chenalhó that border on Pantelhó municipality returned to their homes, reported Alfredo Pérez López, director de civil protection for Chenalhó.

In an interview he said that the Tsotsils who were refugees in different parts of Chenalhó returned on Friday to the localities of La Esperanza, Quextic Centro y Poblado, Acteal Alto, Acteal Centro, Jabaltón and Canolal Centro, in the area bordering on Pantelhó.

He added that municipal authorities hired 60 to 65 vehicles to transport the indigenous people to their communities of origin, accompanied by agents of the National Guard and state police, as well as by members of the Mexican Army and officials of the municipal council.

Pérez López pointed out that after a call from Mayor Abraham Cruz Gómez, municipal agents from other localities collected corn, beans and other products to deliver to the returnees. “Everyone brought aid,” he emphasized.

He said that some people had already returned on their own, because they considered that there was security in their communities, in such a way that: “the majority of those displaced already returned to their homes.”

Sources from the Civil Society Las Abejas organization reported that members of that grouping who left places bordering on Pantelhó have not returned to their houses because they are afraid and are still refugees in Acteal, Chenalhó.

The Cáritas group of the Diocese of San Cristóbal de Las Casas reported that it continues delivering humanitarian aid to displaced persons who have not returned to the towns they left.

Data from civil organisms indicate that around 3,200 people from Chenalhó and Pantelhó abandoned their homes on July 7 and 8, after the El Machete People’s Self-defense group irrupted in the municipal seat of Pantelhó.

El Machete later reported that it intends “to expel the sicarios (hit men), drug traffickers and organized crime” from Pantelhó. In addition, it demanded the annulment of the June 6 elections in that municipality, which Raquel Trujillo Morales, of the Partido de la Revolución Democrática (PRD), won by a difference of more than 3,000 votes over the Partido Revolucionario Institucional (PRI). The group announced that it would elect its municipal authorities through the system of uses and customs.

Residents of the Pantelhó municipal seat, which has been occupied by police and soldiers since July 7, reported that activities started to normalize last week because several stores reopened and a lot of people started selling fruits and vegetables in booths on the street.