They liberate the 17 students and 2 displaced indigenous people, but prohibit political activism 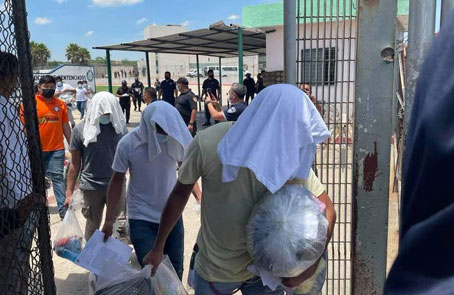 Today, a control judge of the El Amate Prison issued the binding to criminal proceedings of the 17 teachers college students (normalistas) and 2 displaced indigenous people, but granted them the precautionary measure of facing their proceedings at liberty and prohibited them from repeating their political activism while they continue in those proceedings.

The State Judicial Power reported this morning that giving continuity to Due Process, and at the request of the Defense before the evidence of the State’s Attorney General, a judge decided a change of the Precautionary Measure for the 17 Mactumactzá Rural Teachers College students (normalistas) and 2 people displaced from the Ejido Puebla, in Chenalhó, setting for them a periodic sign-in and the restriction of activism in public spaces.

The 17 teachers college students and two people displaced from the Ejido Puebla, in Chenalhó, will face charges for the crimes of Robbery with Violence, Damages, Mutiny (Rioting), Attacks against the Peace, Corporal and Patrimonial Integrity of the Collectivity and Gang Activity, which they will face outside the El Amate Prison, with restrictions ordered by the authorities; in other words, they will not be able to participate in acts that alter the public order.

The State Judiciary said that the 95 people that were arrested at the ticket booth on the Chiapa de Corzo-San Cristóbal de Las Casas Highway on May 18, 2021 will continue bound over for trial (from their domicile or school) and that in case of reoffending, they will be re-entered into the El Amate Prison.

Among the 95 people initially arrested, 74 women first received the precautionary measure of periodic sign-in, while two minors were released without conditions and, finally, 17 normalistas and two people displaced from the Ejido Puebla in Chenalhó, received the measure of periodic sign-in, therefore all those arrested will continue to face trial.

Along with this news, teachers of the National Coordinator of Education Workers (CNTE), teachers college students, parents and diverse groups in solidarity with Mactumactzá, mobilized to block the Chiapas Tower in the state capital, headquarters of various state government agencies and also occupied the front of the Institute of Elections and Citizen Participation, which organizes the elections this Sunday, June 6 to elect 123 mayors and 24 local deputies.

In addition, while the prisoners were coming out of El Amate, teachers, normalistas and parents, blocked the Pan-American Highway at the prison to await the time when they would be released and receive the young people.

← Students and teachers initiate a sit-in to demand the students’ liberation
CNI members in Chilón, Chiapas are intimidated with rifles →

2 Comments on “They liberate the 17 students and 2 displaced indigenous people, but prohibit political activism”