The March of the Color of the Earth 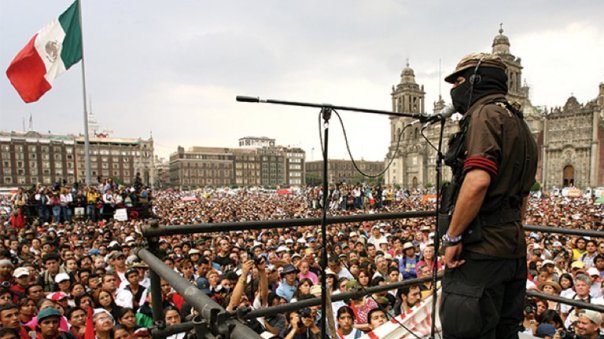 Twenty years have passed since The March of the Color of the Earth, the Zapatista journey through 12 states that shook deep Mexico. Between February 24 and March 28, 2001, 24 rebels traveled 3,000 kilometers of highway, filling plazas on their way and placed at the center of the political debate a radical disjunctive: to construct a country for everyone or a nation for just a few.

The mobilization began with the new moon. Its fragrance was that of Martin Luther King’s great marches for the rights of African Americans in the 1960s, as well as the indigenous uprisings of Ecuador and the Indian days of struggle in Bolivia. Born of an extreme situation in the most remote corners, these protests went up and down mountains to bring their word and their presence to the political heart of their nations.

The march was part of the cycle of mobilizations of the Zapatista National Liberation Army (Ejército Zapatista de Liberación Nacional, EZLN) outside Chiapas, initiated in October 1996 with the departure of Comandanta Ramona and the foundation of the National Indigenous Congress (CNI, its initials in Spanish), the caravan of the 1,111 towards Mexico City, in September 1997, and the Consultation in March 1999.

At its start, more than 20,000 EZLN support bases peacefully occupied the streets of San Cristóbal de las Casas, Chiapas, to say goodbye to their delegates. From that moment, city after city, town after town, the displays of popular support intensified, until ending in the glorious concentration in the Zócalo of Mexico City on March 11, 2001.

The explicit objective of the day was to meet with the Congress of the Union to dialogue about the de constitutional reform initiative on indigenous rights and culture elaborated by the Cocopa. [1]

The EZLN announced the march one day after the inauguration of Vicente Fox. Oblivious to the palace disputes, the mobilization became the principal challenge to his conservative Revolution, with hundreds of thousands of people in the streets and coverage of the mass communications media. To the dread of the business community, who went so far as to recommend shutting themselves up in their homes during those days, it achieved getting the urban and rural poor to join the indigenous cause with warm enthusiasm.

The expedition awakened an unstoppable wave of indigenous adhesion. On February 27, in Tehuacán, Puebla, Concepción Hernández Méndez, the people’s lawyer, a tireless fighter for human rights, slowly told the rebel delegates, as if she were declaiming an ancestral poetry, that she endorsed the expedition for indigenous dignity. “We experience it as ours, she said, because in it is kept the seed that we want to start germinating now. Your heart is in our Indian word. Your reason for being is in our rights. Our hope is placed in your achievements and objectives. In the march are the possibilities that we can arrive at a tomorrow full of hope. It is the hour of the Indian peoples.”

On March 11, now in Mexico City, the Zapatistas moved from Xochimilco to the Zócalo, aboard a Kenworth truck with the EZLN logo on the cabin and the platform uncovered. An enormous banner on its left side read: “Never more a Mexico without us.” During the ten-mile journey, tens of thousands of people took to the streets, balconies and rooftops to cheer them on. It was a historic march, Eduardo Galeano wrote. “Emiliano Zapata entered the DF for the second time,” he asserted.

In a memorable speech, Subcomandante Marcos summarized: “On this trip, we indigenous people have seen the map of the national tragedy, from Chiapas to the Zócalo, the center of power, and we have been gaining a flower of dark dignity.” He added: “It is the hour of the Indian peoples, of the color of the earth, of all the colors that we are below and what colors we are despite the color of money.”

Finally, in an historic event on March 28, the Zapatistas and the CNI spoke in the San Lázaro dais. “It’s also a symbol that I, a poor, indigenous and Zapatista woman, who speaks first and mine is the central message of our word as Zapatistas,” Comandanta Esther expressed there. She added that the country that the rebels want is one “where difference is recognized and respected, where being and thinking differently isn’t a reason to go to jail, being persecuted or dying.”

Despite the enormous mobilization, instead of paying the Mexican State’s historical debt to its Native peoples, the Congress of the Union increased it, by legislating a caricature of the constitutional reform on indigenous rights and culture. It bet on a country for the few. Today’s Mexico cannot be understood apart from this betrayal. A moat was opened then between the political class and the Indian peoples that remains open to this day.

The March of the Color of the Earth had long-term roots and reasons behind it. Unlike other protests, those born of demands for the recognition and dignity of Native peoples are far from being fleeting episodes. Zapatismo survived the felony of the [political] parties. Faithful to the peoples who gave it life, it remade itself on the route of autonomy without asking permission. As it did 20 years ago, it’s now preparing for another journey in the direction of hope, but with a different place for arrival: the Europe of below.

[1] Cocopa is the Spanish acronym for the Commission of Peace and Reconciliation. It is a congressional commission assigned to assist the peace process in Chiapas. The Cocopa attended and assisted the peace talks between the Zapatistas and the Mexican government that led to the San Andrés Accords.