The Death of the Bees and the Maya Train

The Goldman Prize, considered to be the environmental Nobel Prize, was awarded this year to Leydy Pech Marín, community member and beekeeper from Hopelchén, Campeche.

The award highlights her participation in the opposition to the sowing of GMO’s, an effort of Muuch Kambal, the organization of Maya women of which Leydy Pech is part, and the Chenes Collective of Maya Communities, with the support of the team from Indignación, not only on the Yucatán Peninsula, but in seven states throughout México. It has not only been a struggle against Monsanto, but also against the entire model of agro-industrial development that is harming us, stated Pech. (https://tinyurl.com/y47ld6mf)

Despite international recognition and although the permit to Monsanto was cancelled, something that a court reaffirmed in 2020, the government has done nothing to ensure that transgenic soy is not planted on the peninsula or in other regions. This December 3rd, Mayan communities together with Greenpeace, Indignación and Cemda denounced that there are suspicions that transgenic soy, as well as glyphosate-resistant corn (“Roundup ready”) has been planted, which also is illegal having been suspended since 2012 due to an ongoing collective complaint. They filed a popular complaint with the Federal Attorney’s Office for Environmental Protection and SENASA, demanding inspection and surveillance in several areas (https://tinyurl.com/y35rh7vu). 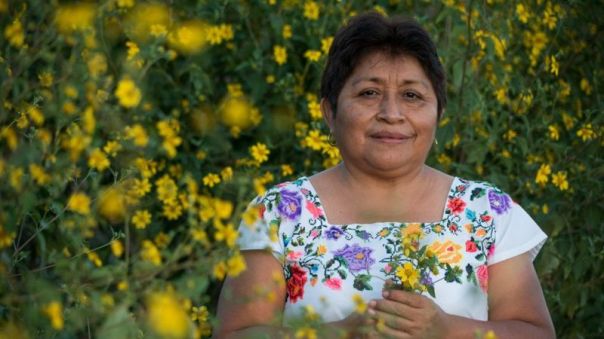 The Goldman Prize is given to people who are often at risk because of their environmental struggles. In addition to recognizing their work, it is a way of raising international awareness about the threats they face. Leydy Pech deserves every bit of this recognition, but as she emphasizes, it is part of a collective struggle from the community with the constant participation of other Mayan women, beekeepers, and peasant farmers in a defense that encompasses territory, forests, rivers and their traditional ways of life, something that many other communities and organizations share.

In an interview conducted by Gloria Muñoz Ramírez, Leydy Pech explains that the attacks on life and territory of the Mayan communities have multiplied and spread. Dedicated to the tending of native bees (meliponas), she knows very well, from direct experience that the integrity of the forest and of the entire territory is essential to the health of the bees, in addition to being a fundamental part of life, the economy and the values of the Mayan communities.

In the last decade, she says, the march of industrial agriculture has created enormous areas of deforestation — Campeche is the state with the greatest deforestation in Mexico — and serious contamination of soils and water with agro-toxins that are harmful to the health of people, animals, medicinal plants, and traditional crops.

With it, spraying of glyphosate and other agro-toxins increased with the use of light aircrafts that kill much more than the weeds. Toxic drift has caused cases of mortality amongst bees and also impacts in the communities. Besides the fact that the poison gets into the aquifers, we are also breathing it, warns Pech.  (https://tinyurl.com/y4vgqn8c).

It is important to remember the context of this situation. In addition to not carrying out the oversight tasks which are required to prevent the illegal planting of GMO’s the government is pushing the wrongly-named Maya Train against the will of many communities and appealing to simulated consultations that do not fulfill the rights of the indigenous communities established by the United Nations.

This megaproject, far from idyllic and false image that the government presents that it will only be a train that runs over tracks that already exist, is a key piece in order to exponentially increase the kind of industrial agriculture development that Pech denounces, and that threatens the traditional Maya subsistence and ways of life.

As the international organization Grain explains in a well-informed article, this is not about a train, but a model of multimodal land grabbing (https://tinyurl.com/y6r6fplk) that goes over the territories of Maya communities to displace them and disperse them in order to serve an industrial business model, where in the best case, they will be poorly paid workers or will migrate to become so elsewhere.

The huge hog facilities that poison the water of the cenotes and create new pandemics (https://tinyurl.com/y6r6fplk), the advance of agricultural and grain facilities like that of the Enerall company, founded by Alfonso Romo and now administered by his family that intentionally filled in a cenote (https://tinyurl.com/vgp2nfe), the industrial mega-facilities for energy that displace the communities, the large tracts of illegal transgenic monocultures and cereal grains with agro-toxins, the green deserts of oil-palm monocultures, all of these businesses will be facilitated by the Maya Train.

This Goldman prize is recognition of a just fight. It also demonstrates that the communities know which life they want, that they are fighting for it, and that it is not the one that the Maya Train is pushing.

*Researcher at the ETC Group

Re-Published with permission by the Chiapas Support Committee

← More than a train: territorial re-zoning
The EZLN and the Other Europe →