The war for water in Morelos 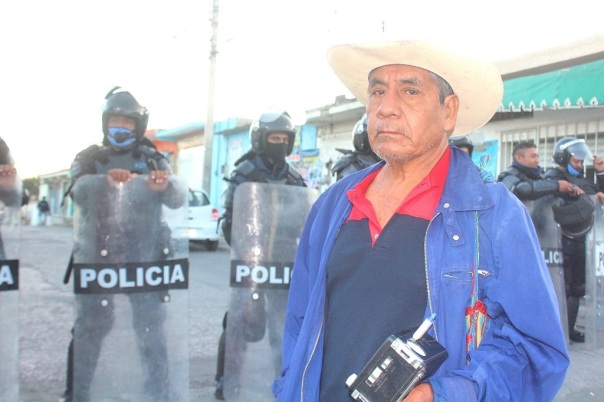 Cuauhtémoc Blanco, the Mexican midfielder who has scored the most goals in official competitions, scored a self-goal. Last September 24, now as governor of Morelos, he declared that the head of the State Attorney General’s Office (FGE, its initials in Spanish), Uriel Carmona Gándara, “knows who” murdered the activist Samir Flores Soberanes, but doesn’t want to reveal it because he’s “afraid.”

Samir Flores, the Nahua communicator who hosted the Amanecer ranchero program on Amiltzinko community radio, an opponent of the Morelos Integral Project (PIM, its initials in Spanish), was deviously murdered outside his home, in Amilcingo, Morelos, on February 20, 2019. Just the day before he had participated in a meeting organized by the federal government delegate in Morelos, Hugo Erik Flores, the lawyer for the paramilitaries responsible for the massacre of 45 innocent people in Acteal, Chiapas. There, the blacksmith questioned “the lies that they’re telling about the thermoelectric plant in Huexca and the PIM.”

But, on that occasion, Carmona was silent. That, despite the fact that on September 25, 2019, he declared to the Morelos Congress that the killers of the environmentalist were identified and that they would soon be apprehended.

Following his statements, the Peoples Front in Defense of Land and Water of Morelos, Puebla and Tlaxcala (FPDT) asked Cuauhtémoc Blanco in a communiqué: “Do you know who killed Samir, Mr. Governor? Why do you say the attorney general is afraid? Of who, whom or what is he afraid? Would you be willing to declare what you know about Samir’s murder, Mr. Governor?” His response, like the attorney general’s, was a resounding silence.

Offense upon offense, the unsolved homicide of the Nahua indigenous man acquired even more relevance in the early morning of November 23, when 300 members of the National Guard evicted two encampments that the ejido owners installed since 2016, on the banks of the Cuautla River, in San Pedro Apatlaco, to impede the diversion of water from the riverbed to the thermoelectric plant in Huexca.

Before dawn, a campesino who was guarding the occupation, showed the National Guards a restraining order (amparo). They responded that they didn’t want to see it. The CFE and the Interior Ministry have falsely stated that there is no legal impediment to resuming the work. But the ejido owners have 19 amparos and outright suspensions currently in effect against the PIM: nine of them for the water from the Cuautla River and against the aqueduct. There are three more against the aqueduct, among which are two from Nahua towns of Amilcingo and Atlixco. There’s another one against the thermoelectric, filed by Huexca since 2014 (https://bit.ly/2Vd7L8L). But the federal government doesn’t care about that.

Campesinos use water from the Cuautla River for their crops; with it, they water grains, fruits and vegetables with which they feed their families. In it is their life, their heritage and the survival of their peoples. According to Jorge Zapata González, the grandson of Emiliano Zapata: “We have through concessions, through presidential decree since 1926 all the ejido grants and it is clearly specified that all the water from the Cuautla River and its tributaries, including the treatment plant belongs to the ejido owners, it’s one single water, so how are they going to divide it.”

This clash between “Obradorismo” [1] and the peoples of Morelos didn’t always exist. In May 2014, in Yecapixtla, Morelos, Andrés Manuel López Obrador opposed the thermoelectric plant. At a rally, he pointed out: “We don’t want the construction of the gas pipeline or of the thermoelectric plant or of the mines, since they are going to destroy the territory and pollute the waters.” He added: “Imagine that you want to build a thermoelectric plant, in Anenecuilco, the land where the best social leader in the history of Mexico, Emiliano Zapata, was born. It’s like going to Jerusalem and building a toxic dump or a nuclear plant.”

The government justifies the entry into operation of the thermoelectric plant so as not to lose the 25 billion pesos that have been invested in the project. “The plant –said the President– belongs to the CFE, a public company, a national company […] If the plant doesn’t function that investment is lost, which is the public budget, the people’s money.” He “endorsed” carrying out the work with a “rigged” consultation, approved by only 24, 783 people, mostly residents of municipalities outside the project. In 2018, AMLO obtained 613, 906 votes in Morelos, 96.12 percent more than on the “consultation.”

However, beyond pesos and centavos, the PIM is an extremely risky project. The gas pipeline that feeds the thermoelectric plant is installed in a zone considered high risk due to seismic activity caused by the Popocatépetl Volcano. The combined cycle terminal that integrates it, installed a few meters from the town, is poorly planned and emits an infernal noise. As if that were not enough, they plan to build another terminal there. And, although it is said that it will use wastewater, it will probably have to take water from the Cuautla riverbed.

In Morelos, the water, like the land, belongs to those who work it. To its peoples, its defense comes as an inheritance. And they have been faithful to it. That’s what the Zapatistas, Jaramillistas, Vinh Flores (Samir’s uncle, murdered like him for defender his people) and Samir Flores did. Like 100 years ago, in the current war for water, the heirs of Zapata and Jaramillo are willing to assert their legacy.

[1] “Obradorismo” refers to the policies of the current president of Mexico, Andrés Manuel López Obrador (AMLO).

← The CNI-CIG and EZLN: For Life and Against Money
Critical thought and the pandemic →