The Maya Train and the right to Indigenous Autonomy 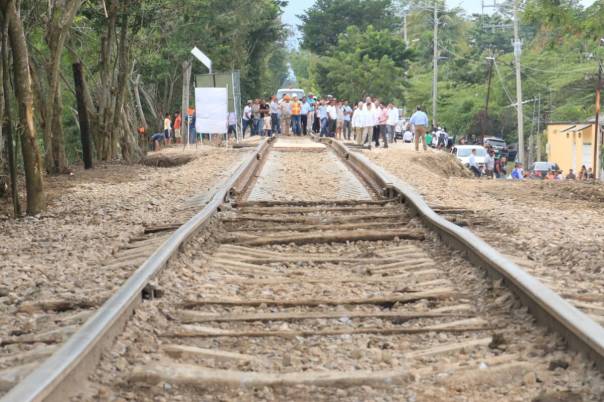 The project that is called the Maya Train is on its way and the director of Fonatur (Fondo Nacional del Fomento al Turismo, the National Fund for the Promotion of Tourism) has unfurled his strategy to outmaneuver the rights of indigenous peoples. As we know, there are Maya and human rights organizations that are taking legal and political actions to denounce the impacts of the project on their territories, caused by the so-called development poles that define it and whose blows are being omitted during the current stage.

Also, a set of collective landholder (ejidales) authorities lent themselves to support this project in the name of communities that have not necessarily been informed about the commitments being made by them. This was evident in the process of the so-called consultation that was carried out at the end of last year, where without significant participation and no prior and insufficient information on the positive and even negative impact of the project, their “consent” was obtained.

The offices of the UN High Commissioner for Human Rights noticed that in that exercise international standards on the right to carry out a consultation were not fulfilled. With this supposed “endorsement,” the bidding, adjudications and winning businesses participated with the executive branch in the banner call of the Maya Train.

The landscape is quite complex for communities and opposition organizations. They face enormous challenges, even more so with the pandemic, to mobilize and inform communities. They also face them in the legal arena where it seems that the Judicial Branch is creating a pattern in its district rulings. The collegiate court rules in favor of FONATUR and restricts the impacts of the initial suspensions that were defined in three lawsuit rulings. However, they are denouncing it. And even the Asamblea de Defensores del Territorio Maya Múuch Xíinbal (Assembly of Defenders of the Maya Múuch Xíinbal Territory) went to the Inter-American Commission on Human Rights (CIDH), requesting precautionary measures; and they also went to Mexico’s National Commission for Human Rights (CNDH).

Given that the Maya Train project had not been released, not even before the simulated consultation, we are only just seeing official evidence of the FONATUR strategy, while partial, in reference to phase I of the train. The institution decided to present its environmental impact statement (EIS) to the Semarnat’s Dirección General de Impacto y Riesgo Ambiental (DGIRA, General Office on Environmental Impact and Risk), even though this Secretariat gave them an exemption, supposedly because it was only going to carry out the maintenance of old railways and with prior right of way.

The EIS phase I is divided in three sections: 1) Jungle 1: Palenque-Escárcega; 2) Gulf 1: Ascárcega-Calkiní; 3) Gulf 2: Calkiní-ANP Cuxtal, and Gulf 2a: ANP Cuxtal-Izamal. It is recognized that it is no longer about maintenance. The phase includes the trees that will be cut down and they will build 13 railway stations in the 631.25 kilometers of the line, 146 vehicular passes, 24 viaducts, three maintenance stations, a maintenance workshop, 40 passes for fauna, drainage works and two cargo loading stations in Candelaria and Campeche.

The document is riddled with statements and, in the case of indigenous rights, it transforms them into authentic rhetorical and regressive speech. It includes international instruments, the constitutional norm of Article 2, the constitutions of the five states that the project impacts and its state laws and offers to respect each one and enumerates that there are Mayas, Tzeltales, Ch’oles, Tzotziles and others in the states of Chiapas, Tabasco, Campeche, Yucatán and Quintana Roo. These hollow statements do not recognize the right of self-determination and autonomy and in turn reflect an authentically racist and discriminatory picture.

Let’s see: “FONATUR is conscious that the protection of the indigenous peoples and communities constitutes the protection of a vulnerable group or minority. Which is to say, a group smaller in number that places them in an inferior position and who does not dominate, with challenging development of its economy and which has conserved its features that characterize it throughout time, such as its culture, race and customs; they seek to maintain their difference from the majority” (III. p. 438).

They cannot say that this position was a typo, as they argued with respect to the phrase “ethnocide can have a positive turn, ‘ethno-development’” and then “correcting” it: Ethnocide has a positive opposite, “ethno-development,” a concept that refers to public policies that went beyond assimilation or integration, but have always been foreign to the historic struggles of indigenous people. More: the allusion in the EIS to the results of the consultation does not look like proof of good faith efforts, where the great majority of indigenous people denied that there existed traditional authorities and recognized as authorities those institutions like municipal presidents and commissioners of the collective landholders (ejidales). Are they betting on ethnocide?

← T-MEC, agriculture and neoliberalism
Change in era and ethnocide →