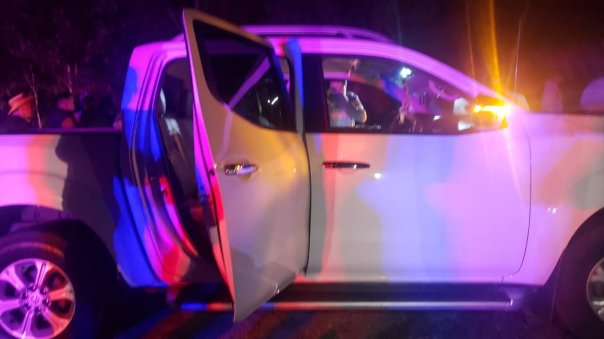 The National Guard just dismantled the barricades of the paramilitary-style civilian armed groups of Chenalhó, Chiapas, last May 31; the [paramilitaries] have returned, and so have the shots they fire at the displaced families of Aldama and Chalchihuitán who have lived in shelters and other people’s houses for many months. [1] There had been 65 barricades located in Santa Martha, and they extended to the neighboring municipality of Aldama. Some dated back many years.

In this context, the mayor of Chenalhó, Abraham Cruz Gómez, suffered an attack Monday night [July 6] in which he was injured. His driver, Efraín Pérez, died when he was transferred to San Cristóbal de Las Casas. The aggression was perpetrated near Las Minas community, in San Juan Chamula.

The mayor, from the PVEM, was returning from an official meeting in Tuxtla Gutiérrez. An agreement had been signed on June 4 between the Tzotzil municipalities of Los Altos of Chiapas, in the presence of the Undersecretary of Governance, Alejandro Encinas. However, in recent days, Cruz Gómez “accused” the neighboring municipality of Aldama of “not complying with the agreements,” and thus justifying the attacks that followed. The only aggressor gang has been the one from Chenalhó, and it has never been disarmed.

On May 27, the Fray Bartolomé de Las Casas Human Rights Center (Frayba) pointed out that it was fundamental that violence “provoked by ‘civilian armed groups with a paramilitary cut’ that come from decades of impunity” be deactivated in these territories.

Repeated testimonies of displaced families from both Aldama and Chalchihuitán confirm that in the last week, beginning June 29, the shootings against people in forced displacement are almost every day. The permanent commission of 115 comuneros and displaced persons from Aldama denounced that the place of attack was and is Tojtik, in Santa Martha, where shots are fired with high-powered weapons at the community of Tabak, in Aldama.

In recent days the attack points multiplied in the T’elemax, Colado and Chino sites. Transported in cars and small trucks, the armed Chenalhó attackers entered the 60-hectare territory in dispute with Aldama (the origin of the problem) and fired shots at San Pedro Cotzilnam community, in Aldama. Additionally, cars and passersby, as well as Tabak were attacked from Tulantik, Chenalhó. The Chalchihuitán displaced are victims of a border conflict that has been unresolved for 40 years.

Yesterday, while the president of uses and customs of Aldama, the PRI member Adolfo López, distanced himself from the attack on Cruz Gómez in a press conference, the displaced persons reported new shots from the Santa Marta sector at 6:20pm.

[1] The displaced referred to are members of Las Abejas – They are facing famine. You can help here: https://chiapas-support.org/2020/06/26/campaign-for-la-abejas-end-the-famine/

← This is how they protect themselves from Covid-19 in Zapatista territory
74 Armed attacks against families displaced from Aldama, Chalchihuitán and Chenalhó →