Teopisca, Chiapas. Young Zapatista woman at the international Women’s Gathering in the Caracol of Tulan Kau.

How do the Zapatistas protect their territory from the coronavirus? With a diffuse and extensive territory, the EZLN has bet on prevention and lack of physical movement of the inhabitants.

OCOSINGO, CHIAPAS. Doctor Luis Enrique Fernández Máximo learned about the red alert of the Zapatista Army of National Liberation (EZLN) through the Internet. He left the Zapatista autonomous clinic of the community of Las Tazas, where he works, and bought a card that allows him to connect to the web even in the area of the Lacandón Jungle where there is no signal. Since he left Tlaxcala to work with the NGO Sadec (Community Health and Development) in this community, the young doctor discovered that not only did he love the simple life and the nighttime silences of the jungle, but that his real need for connection to the internet is that of a couple hours a week.

It was March 16th 2020, and in Mexico there were only 82 positive cases of coronavirus. Luis Enrique Fernández read on his cell the communiqué from the EZLN:

“Given the serious and scientifically proven risk to human life presented by COVID-19 or “Coronavirus”; given the frivolous irresponsibility and the lack of seriousness shown by the bad governments,” writes the Revolutionary Indigenous Clandestine Committee (CCRI) General Command of the EZLN.

“Given the lack of accurate and timely information about the spread and severity of the virus and the lack of a coherent plan to confront it. Given that our commitment as Zapatistas is to struggle for life. We have decided: to declare a red alert in all of our towns, communities, barrios and in all Zapatista organizational bodies.”

Upon reading the statement, the young doctor thought that the EZLN would invite him to leave their territory. That’s what was done with the other four doctors and dentists from Sadec, who work in four communities of Palenque and Ocosingo. However, that was not the case. His stay was allowed in order to support the only “health promoter”(fem), as those Zapatistas who heal people with plants and western medicine are called.

When the EZLN took up arms in 1994, it reclaimed more than 150 thousand hectares of land, where it constructed systems of government, justice, education and health totally autonomous from the state; this in regions where neither teachers, nor doctors nor lawyers ever arrived. It did this with the solidarity and support of national and international collectives and organizations, among them Sadec. Since 1995, Sadec has collaborated in medical consultations in some autonomous communities, and in training courses for community health promoters, many of whom are, in turn, educators of their own colleagues. 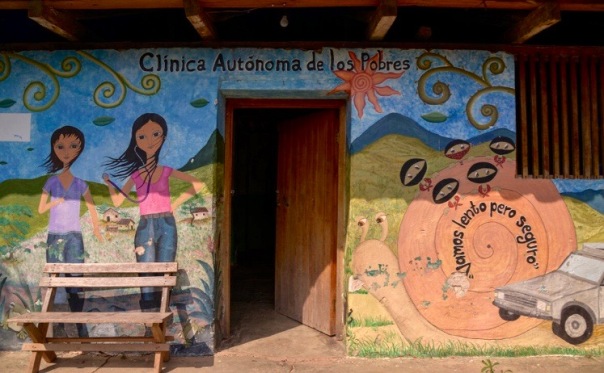 Las Tazas, Chiapas. Autonomous Clinic of the Poor in the community of Las Tazas.

Joel Heredia, the founder of Sadec, says that they learned that health is much more than the absence of sickness; and it has to do with “the ability to feel like waking up, walking, laughing, going to the milpa. Health means that your heart is content, that you feel good about yourself and others.”

At the time the the Red Alert was declared, the EZLN closed all of its Caracoles and the Centers of Resistance and Rebellion (CRAREZ); Paralel to the declaration of a red alert, the EZLN closed the Caracols and the Centers of Resistance and Rebellion; similarly, the “administrative centers” that are the seats of its government and of its largest and most equipped clinics. The health promoters were trained in the prevention of Covid-19; after which they were sent to their own communities, the most remote as well, where there are small autonomous “houses of health.”

“It is a clearly strategic approach: to not have mobility to prevent the spread of the virus, and to have the capacity to provide seasonal, local care at each point where there is a health promoter,” Joel Heredia explained. It surprises me that they haven’t set up an “autonomous Covid Center” to isolate suspected cases. I suppose that making the cold calculation of the costs and benefits that they assume that it wasn’t worth trying to provide care, given the high risk of contagion amongst health personnel; instead they focused on community preventive action. Without a doubt, knowing that in balance, this carries some cost, as people with other illnesses are not being treated.”

The element that most complicates this strategy is that the territory under the influence of the EZLN is not clearly delineated. In it, Zapatistas live side by side with partisans, and it becomes very difficult for the autonomous authorities to exert strict health controls.

“When the coronavirus arrived in Mexico, in the community of Arroyo Granizo the Zapatista authorities called together the whole population, both Zapatista and partisan — in order to discuss safety measures,” Joel Heredia explained. It worked for a few days, and then the ability to maintain vigilance was lost, mostly because of the migrant people who returned.”

As in many corners of the world, one of the greatest concerns of the EZLN is the reception of migrants returning to their communities after losing their jobs in the northern maquilas or on the beaches of the Caribbean. The recommendation of the Zapatista Command is to put them in quarantine.

“We know that the brothers and sisters of some communities, who come from outside, have been isolated. After 15 or 30 days, they re-join their families,” says Comandante Tacho in an WhatsApp audio that was broadcast among the EZLN support bases. “The care you have taken is the right thing to do. This way we are sure that we are avoiding a contagion that could come from outside. We don’t want it for anyone, but we have to take the necessary precautions so that we all come out of this alive confronting this disease that has spread so much in various parts of the world.” 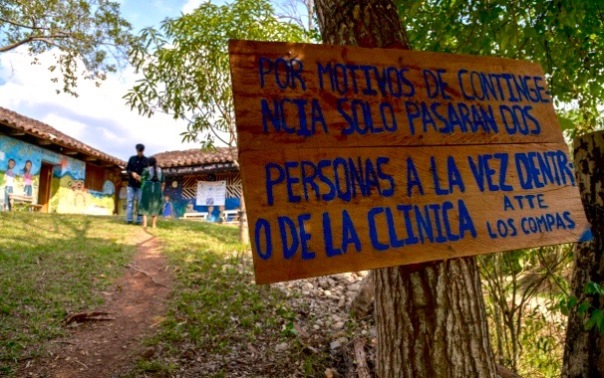 Las Tazas Clinic. The sign read: Because of the emergency only 2 people can enter the clinic at the same time. Sincerely, The Compas.

The autonomous clinic of Las Tazas opened in 1995; and it is located in the zone of Dolores Hidalgo, one of the new Zapatista caracoles announced a little more than a year ago. It is a clay building painted blue, with murals of women with stethoscopes, plants, and covered faces. A plastic banner hung from the outside wall describes the symptoms of the new coronavirus and its preventive measures. Outside a poster warns of the new rules. “For contingency reasons, only two people at a time may enter the clinic. Signed, the compas.”

The Autonomous Clinic of the Poor has a pharmacy; consultations are free, but the medicines have a cost. It also has a dental clinic and a doctor with an ultrasound and doppler machine. The Zapatista health promoter (fem) and the doctor on rotation from Sadec attend to patients every day of the week, afternoon and morning. Prior to the health emergency caused by the pandemic, they also made house visits. They receive some ten patients a day, people from Las Tazas as well as eight other communities.

The service that the autonomous clinic provides is essential to the population of the zone, Zapatista and partisan alike; now the the Rural Medical Unit of the IMSS (Mexican Institute of Social Security) in Las Tazas only opens three days a week, and in the month of May, the doctor only arrived a few days.

“Many people that come to the autonomous clinic had already been at the IMSS clinic, and they arrive asking us if the diagnosis of the other doctor is right,” says Luis Enrique Fernández of Sadec.

Every twenty days, Luis Enrique takes a shift at the autonomous clinic of Las Tazas with Juan Carlos Martínez Vásquez. This is another young doctor originally from Mexico City that, before arriving in the Lacandón Jungle, had no knowledge of Zapatista thought and practice. Although the health promoter helps him with translation, his biggest difficulty is communication in Tseltal, since a good number of the patients don’t speak Spanish.. Thanks to the health promoter, Juan Carlos Martínez came to know the medicinal plants and learned what they don’t teach in universities — to treat the person and not the disease. “If you were to see a promoter speak with a patient one day, it is truly the most human approach that you would get,” he says.

So far, six patients with symptoms of Covid-19 have come to the Las Tazas clinics, and are sheltering in their homes. The most severe cases would have to be transported to the Respiratory Attention Center opened by the Secretariat of Health in Ocosingo. This is located three hours away.

According to Joel Heredia, founder of Sadec, in Ocosingo and Palenque, attention in the public health system paradoxically improved with the pandemic. “Before, the hospitals didn’t have intensive care areas or ambulances because the people who most needed them were indigenous women who had complications during childbirth.”

This article was originally published in Spanish, on July 4, 2020 by Pie de Pagina. https://piedepagina.mx/asi-se-cuidan-del-covid-19-en-territorio-zapatista/ This English interpretation has been re-published by Schools for Chiapas and re-published with permission by the Chiapas Support Committee