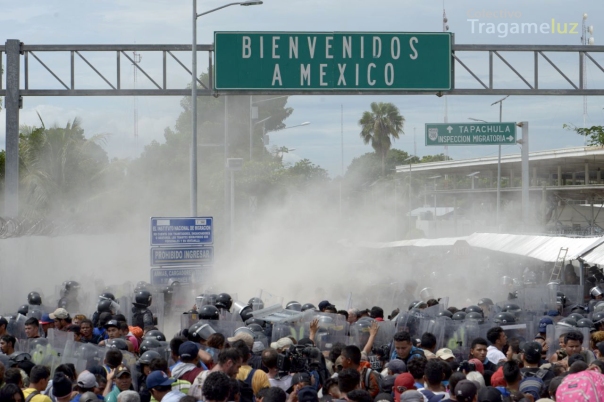 Over the weekend of January 18-19, a new Migrant Caravan of roughly 2,000 Honduran migrants arrived at the Mexico-Guatemala border and made mostly unsuccessful attempts to enter Mexico from Tecún Uman, Guatemala. On Monday, Mexico’s immigration police and National Guard stopped the large group from entering, using tear gas (depicted in the above photo). They re-grouped and tried to enter again on Jan. 22. Their current status is not clear, but apparently they are being allowed to enter one at a time to determine if they are eligible for a work permit or want to request asylum in Mexico. Mexico is no longer offering temporary visas to travel through Mexico, so migrants have to either apply for a work permit or ask for asylum in Mexico. Approximately 1,000 have been sent back to Honduras.

Peoples Without Borders (Pueblos Sin Fronteras, PSF), a migrant rights defense organization denounced the presence on the southern border of agents from the US Department of Homeland Security coordinating the persecution and hunting of migrants jointly with the National Guard (Guardia Nacional, GN)) and the National Institute of Migration (Instituto Nacional de Migración, INM).

Iirineo Mujica Morga, one of the PSF team members, said this Wednesday that within the framework of the operations to pursue and repress migration into Chiapas he has seen personnel that don’t have the uniform of the GN, nor of the INM or of any other corporation and participate actively in those operations.

These individuals are members of the Department of Homeland Security Nacional stationed in the US Embassy in Mexico, which calls into question the interference that the government of Donald Trump plays in Mexican immigration policy.

“While Ebrard [1] talks about the wonders of the rule of law, the false absence of violence and the supposed respect for human rights and López Obrador [2] talks about thousands of jobs that don’t exist for migrants who fled the place where he wants to send them to work, the one actually directing immigration policy in Mexico is: the Department of Homeland Security of the Trump administration in the United States,” said the activist.

He explained that: “United States government agents are in southern Mexico, at this moment, coordinating the deployment of Mexican police and military members to repress an collective effort of mothers, fathers, girls and boys to escape from hunger and death in Central America.”

Mujica said that he didn’t know at what moment the Mexican Senate voted for US agents to enter [Mexico] to direct its National Guard against migrant peoples and that this is a clear and evident US intervention in internal Mexican politics.

He indicated that the federal government of Mexico is closing the door to human beings that flee from death, and opens the door for US agents to do and undo with migrants, under threat to Mexico of cutting support and placing tariffs.

“The Mexican government cannot send its National Guard to protect people from drug cartels, but Donald Trump can send the National Guard of Mexico to hunt and deport migrants in Chiapas and Tabasco,” said the activist in Tapachula.

He pointed out that one of the principal causes of the dispossession of the Central American people, of the violence and poverty in Honduras, El Salvador and Guatemala, is the US intervention that for years has promoted war, dictatorship, corruption and even drug trafficking.

“While López Obrador says that it’s necessary to address the problem of violence in Central America at the root, and that root is the intervention of the United States, it is paradoxical that López Obrador permits the US to intervene in Mexican immigration policy,” he added.