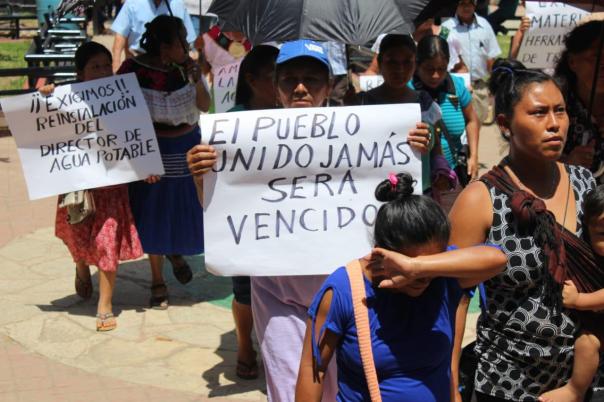 Around 40 families (190 people) were forcibly displaced from the San Antonio Patbaxil community, municipality of Chilón, because they were “attacked by armed subjects,” the Indigenous Rights Center (Cediac) and Fray Bartolomé de Las Casas Human Rights Center (Frayba) denounced. All are scattered without food or shelter.

They detailed that those affected “are in neighboring communities, in the municipal capital and scattered in the mountains, most of them without food or shelter, surrounded by the armed group that prevents returning safely.”

They pointed out that the residents of Juan Sabines Verapaz, Tzubute’el Santa Rosa, in Chilón municipality and Santa Cruz, in Sitalá municipality, are at risk.

They mentioned that the Frayba recorded the attack on nine people who returned to Carmen San José last October 9 to see their properties; the gunfire from high-caliber weapons lasted 30 minutes, and continued the following day.

Although the Frayba informed the state and federal authorities about the violence in the Chilón region, “the Mexican State has not carried out humanitarian aid or protection and prevention actions to prevent that the human rights crisis in the state continues escalating,” and because of the unpunished behavior, they said, links to state and municipal police are presumed.

Both organisms demanded: “guarantying the life, security and integrity of the 125 people displaced from Carmen San José and the 65 people displaced from San Antonio Patbaxil, as well as preventing the forced displacement of Juan Sabines Verapaz, Tzubute’el Santa Rosa, municipality of Chilon and Santa Cruz, Sitalá.

Government sources said that Jorge Daniel and Eleazar Álvaro Guillén, those allegedly responsible for the armed acts, were arrested on December 10. Two other participants, Bernabé Álvaro Álvaro and Jeremías Álvaro Álvaro, were captured on December 3. These four individuals, together with Manuel López Gómez, are accused of participating in the kidnapping of five municipal officials in October of last year.

All alleged members of an armed group from the community of Pechtón –which seeks to stay on the lands of their neighbors– are now secluded in the Ocosingo prison.

Chiapas Paralelo reports that the communities attacked are in the process of forming “community government,” meaning they are probably members of MODEVITE.

← The 4T and the yes or yes for the Train they call Maya
The Maya Train: the consultation and the dispossession →