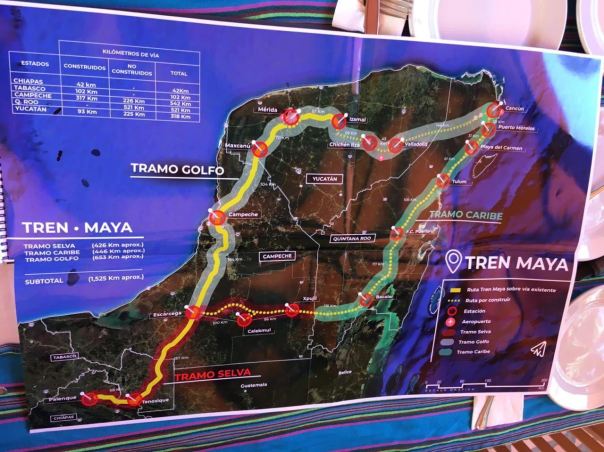 This map shows Tren Maya’s stations in Chiapas, Tabasco and on the Yucatan Peninsula.

The final phase of the meteoric consultation organized by the federal government around the Train that they call Maya will take place on December 14 and 15. There are several substantive considerations that supporting the irregularities of said process. In the first place, an alleged consultation will be held only about a train project, despite multiple evidence that it’s about a plan that entails more than a train and that will imply the construction of real estate and tourist development poles around the stations that are planned on the route through five states: Chiapas, Campeche, Tabasco, Yucatán and Quintana Roo.

Throughout a year mainly Fonatur, with help from the Agrarian Prosecutor’s office, has made efforts and pressures against the ejidos that they should contribute lands for said poles, and both agencies have even stated that more than 90 percent of the ejidos involved have already accepted. They have also peddled the proposal that they be part of the trusts that will be formed and thus be investors instead of selling their land. In the logic of half truths they have enunciated in the call to the so-called consultation that: “the project seeks the integral development of southeastern Mexico and the Yucatan Peninsula starting with territorial planning, preservation of the environment, inclusive economic development, social wellbeing and the protection of tangible, intangible heritage and the historic identity of the peoples of the region.” There is no evidence of such paths.

Thus we have that in the first phase, called informative, they have carried out their formula of regional meetings, at the end of November, in which they have explained to attendees, who they name generically authorities, the goodness of the train. Without conditions for dialogues and agreements, as they point out, for defining distribution of benefits. No environmental impact studies or opinions around the area’s archaeological sites have been distributed. Supposedly, during the next two weeks said authorities would deliberate with their communities to express their posture on December 14 and 15.

Consequently, “the indigenous communities will be able to participate in both consultations, as ethnicities and as citizens, the head of Fonatur said ( Reforma, 29/11). For his part, Arturo Abreu Marin, the federal delegate in Quintana Roo, pointed out: “Those who attend the public consultation that the National Institute of the Indigenous Peoples will carry out for the Maya Train will have to have roots in the community to consult, regardless of whether they are indigenous or people with blue eyes.”

It’s important to linger on the implication of this criterion. It cost many years of struggle of the world’s indigenous peoples to achieve the recognition of collective rights as peoples, independently of the paradigm of the rights of individuals. They are embodied in international instruments. For that matter, the Maya people have their territory in the five states of the train’s route; it is in that zone where the ancestral foundations of their culture, the archaeological vestiges and the ecosystems that have sustained their relationship with nature are established. It is the indigenous authorities, not the ejido authorities and the citizenry in general, who should be consulted centrally and with whom the project’s terms and implications should really have prior agreement.

The “citizen strategy” is underway, members of Morena and the governors promote participation in favor of the yes vote because they say that their President promotes the train and it will bring jobs and progress to the southeast.

Evidently the computation criteria will be quantitative. Is one community one vote and one person another? Some collectives, organizations like the National Indigenous Congress and Maya communities are defining the rejection of the project. They consider it a joke and gave solid arguments; we are not facing a prior, free, informed or culturally appropriate consultation and they will surely deploy the legal resources and resistance within their reach, but they face a government that like the federal exerts a disproportionate use of its political strength with the support of the governors. For both cases there will be only one question: Does the Maya Train go, yes or no? Those who have considered genuine the will of listening to the indigenous peoples didn’t imagine that yes or yes strategy was being prepared for the Maya Train. Or with their epochal translations: It goes because it goes and I get tired. Hey, the peoples also get tired.

← A WHALE IN THE MOUNTAINS OF THE MEXICAN SOUTHEAST
190 people flee after armed attack in Chilón, Chiapas →