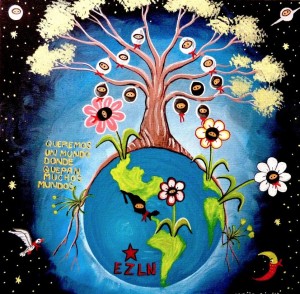 A world where many worlds fit.

Discerning about nation and national State and their transformations with neoliberal capitalist globalization necessitates a defining approach to these multi-meaning concepts of the social sciences. The nation would be that stable human community, historically emerged as the form of imposing bourgeois hegemony, that is, its political, economic, social, ideological and cultural predominance over a territory that attracts as the scope of its production and internal merchandise market, including the labor force, also implanting an internal colony on heterogeneous populations in their national ethnic composition.

The national states, in turn, understood as legal-political organizations that have a territory, a bureaucratic-administrative apparatus, an official language, an army and a common currency are formations whose origin and consolidation are related to the preponderance of positive law about what’s usually practiced, the separation between positive and moral law, between art and religion, between religious and political power, between domestic and public economy, as well as the implementation of new principles of legitimacy through a hegemonic system and correlation of classes that are embodied in legal systems (constitutions), citizenship and the feeling of belonging to a national State that gives rise to a determined majority nationality.

The fact that the State is that space where the public life of the subjects is articulated doesn’t mean that all the inhabitants of a territory find representation in their institutions. That’s why it’s so important to distinguish State and nation, as two dissimilar, and, at the same time, complementary concepts. While the former is derived from political, legal and administrative needs and from monopoly needs of “legal” violence to establish the order that a capitalist society requires for its reproduction, the nation is that historical-social construction that gives identity to the State, but exceeds it by being made up of denied subjects considered “the non-nation”.

In capitalism, although the State pretends to be an impartial computer processor of life, it is embodied in institutions and agents belonging to a social class immersed in an instrumental rationality: the exercise of the power to impose its system of exploitation and domination. The national State plays a fundamental role as a coercive political instrument that imposes a double task: to centralize-unify and to centralize-standardize.

Despite being that national formation that, through cultural patterns of the dominant class, also gives identity to official history, the educational institutions, foundational myths, referential imaginaries, language, political borders and “patriotic symbols” retake something of the dominated, because this identity would not achieve the legitimacy that the State requires to maintain itself and get through recurrent crises. Other social and ethnic expressions coexist with histories, traditions, languages and their own identity affiliations that play a decisive role in the forging of nations, with their resistances and struggles of a nature, in many cases, contra-hegemonic. The subject acting in the formation of nations is constituted by classes; that is, by the class struggle. It’s not possible set aside the political will of the different classes in the emerging and subsequent evolution of nations.

Thus, it is necessary to distinguish between statist nationalism and popular nationalism (patriotism), rooted in the very history of nations. We refer to two contradictory and confronted processes. One is the role of the bourgeoisie as a political and military hegemonic force, that is, state, over specific territories, while the other sociopolitical force is that formed by the exploited and dominated classes, sectors of intellectuals and subaltern socio-ethnic entities, immersed in a permanent process of subsisting and prevailing.

In this way, nations can become “bourgeois nations” in socio-historical states of a new type: sheep people. Assuming the criticism of the of the socialist experience in its authoritarian and autocratic variants, the nation could be built and consolidated starting from a system of national hegemony of the oppressed and exploited classes that generically constitute the people, in their classist connotation. With this foundation, forging, from below, a national project, a national unity governed by an unprecedented political ordering of a legal-state nature, constituent, that installs a new relationship with the people, with the peoples, as ethnic entities, with territory, their natural and strategic resources, conquering, in fact and in law, the popular national sovereignty.

This means, in sum, dreaming about the utopia of a nation that is really democratic.

← Feminists and original peoples orient our steps
What is the gringos’ interest in Sonora: drugs or lithium? →