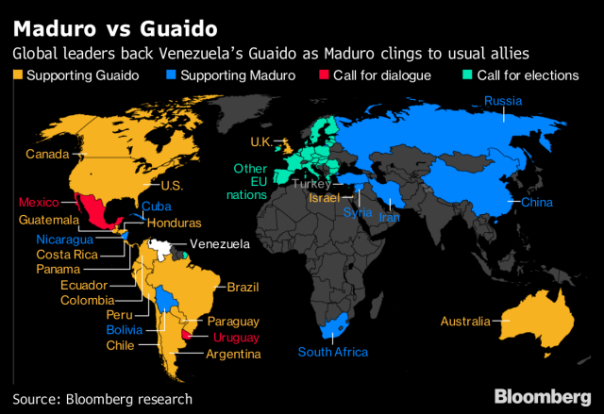 Venezuela allegiances around the world. Bloomberg.com

It is false that there are two presidents in Venezuela. There is only one and his name is Nicolas Maduro. On May 20, 2018 he was elected in free, transparent and trustworthy elections, in which 16 political parties intervened. Six candidates participated and he harvested more than 6,248,000 [votes], equivalent to more than 67 percent of the votes.

On that occasion, a sector of the opposition, made up of three political parties (Acción Democrática, Voluntad Popular and Primero Justicia), called for abstention. However, no presidential candidate impugned the results. No evidence or concrete denunciations of fraud were presented. 18 audits were performed on the electoral system.

The electoral system, with which the May 20, 2018 elections were held, is the same one that was used in the parliamentary elections of December 2015, in which the Venezuelan opposition won. That system guarantees the principles of “one elector, one vote.” The voting machine is only unlocked with fingerprints.

The process was accompanied by more than 150 people, among them 14 electoral commissions from eight countries; two technical electoral missions; 18 journalists from different parts of the world; a euro-parliamentarian and a technical-electoral delegation from Russian Central Electoral.

It is not the first occasion on which the Venezuelan opposition tests a coup to try to take power. Ever since Hugo Chávez won 20 years ago (1998), it has repeatedly and systematically sought to take power, despite the impossibility of winning electorally. The same National Assembly Nacional over which Guaido now presides has tried it unsuccessfully since 2016.

Donald Trump immediately recognized the White House’s straw man (Guaido). And, so that no doubts would remain about his intentions, US Secretary of State, Mike Pompeo, designated the “hawk” Elliot Abrams as his representative in Venezuela. Well known in America, Abrams is a professional in the orchestration of State coups and military invasions. He efficiently promoted and covered up massacres in El Salvador and Nicaragua. He moved the threads behind Iran-contra operation. He was condemned for the sale of illegal weapons to finance the Nicaraguan contras during the Sandinista revolution.

The naming of a government was justified on the alters of the struggle for democracy and human rights. It’s a curious Venezuelan “dictatorship” in which multiple opposition parties operate, call mobilizations, own communications media that say things inadmissible in Western democracies and, even, call for the overthrow of the democratically elected government.

Nevertheless, the truth behind the coup attempt is much simpler. The Standard & Poor’s rating agency divulged it without the heroic garb of great causes. “Guaido –the rating agency published– plans to introduce a new hydrocarbons law that established flexible fiscal and contractual terms for projects adapted to oil prices and the oil investment cycle.” He added: “A new hydrocarbons agency would be added to offer bidding rounds for projects in natural gas and conventional, heavy and extra heavy crude oil.

In his coup attempt, Guaido and the Venezuelan right count on the support of the United States (and the warmongering madness of Donald Trump), Israel, the Lima Group and some European countries, on a sector of the middle class and the Venezuelan oligarchy, and on the mass communications media. For his part, Nicolas Maduro has on his side the immense majority of the Venezuelan people, the Army (and the civic-military union), the republican institutions, the Unified Socialist Party of Venezuela and nations like Russia and China.

As one of the great analysts of the Venezuelan revolution points out, the journalist Marco Teruggi, Chavismo has a characteristic: “its levels of organization and politicization. An organizational fabric exists in the popular neighborhoods and rural areas. We’re talking about communal councils, communes, local committees of supply and production, communal markets, campesino councils, productive undertakings, Bolivarian militias, among other experiences. Chavismo has a territorial and identity dimension. The right has no organized presence there, and that’s why it resorts to armed and paid groups for creating focus groups that can add popular support.”

US gunboat democracy that opened the way to plunder and the colonial subjection of nations threatens to unleash a bloodbath in Venezuela. By all possible means, we must avoid that the attempted State coup succeeds. [1]

[1] As shown on the map above, Mexico and Uruguay disagree with the US position and have called for dialogue between the parties in Venezuela. Maduro has said he’s willing to hold a dialogue. Nevertheless, this week Trump froze Venezuela’s assets in the US (for example, Citgo).