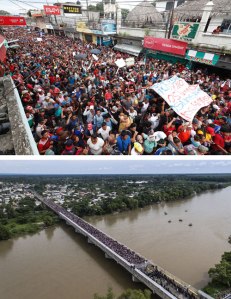 And when she opened her eyes, she thought she was in Mexico. When the young Honduran woman, who had fainted, opened her eyes, Mexico was now within her reach because the Migrant Caravan was breaking the fence at the International Bridge placed by the Guatemalan Police and the stampede of thousands of people was forming. She recovered and joined the group that had just forced open the bridge’s bars and disappeared among the crow

It was the end of the so-called Migrant Caravan that, after leaving San Pedro Sula, Honduras, last Saturday, arrived to join more than 3,000 people at the northern border of Guatemala with the firm intention of reaching the United States and now were subjected to the immigration processes of the Mexican government.

For three days small contingents of the Caravan that had been dispersed at the entrance to Guatemala when they confronted the large police encirclement were arriving in Tecún Umán without stopping. In this way, the large contingent was taking shape again, but it turned out that there were no longer 2,000, but rather many hundreds more.

They held an early meeting, as was their custom, and as now the caravan had finally reunified, they decided to take their backpacks and march to the bridge although they knew that the police had closed it and guarded it with arms and small Army artillery tanks.

A first group of about 50 people had formed in an orderly manner because, a migrant named Joel Carrillo said, Mexican authorities had crossed the bridge to tell them that they would enter in groups of 50 people, which wasn’t true.

Representatives of the United Nations were dialoguing with Guatemalan police commanders to assure that they would not repress the migrant contingent while the caravan advanced with firm intention of crossing over the bridge.

The presence of babies and children withstanding temperature higher than 36 degrees centigrade was very visible.

This time, the cries in unison were to thank the citizens of Guatemala for the help that permitted to travel, eat, sleep and clean up win major problems in their transit through the country. Then came the harangues to demand free passage to Mexico after they arrived.

“We don’t move from here until they open it up to us,” shouted a leader of the caravan that climbed onto the bridge’s grating in order to be heard, and the people answered him with shouts and euphoria. But the minutes were made long because of the intense tropical heat of Tecún Umán and the people started to resent it.

The most vulnerable were babies and small children trapped in the heat that tempted inside of the group and decided to start going forward with their mothers. There were only seconds in which families had to decide if they would separate to reunite later, or not.

Frightened girls and boys that didn’t know what was happening immediately formed the first line of the Caravan. Their sweaty faces were level with the anti-riot shield of the police. Their words and moans were not heard because of the intense noise of the crowd.

One of the leaders ordered: “Let’s go over the river!” But, that was rejected. “We cross over the bridge,” dozens of migrants answered.

The heat was stifling. A little girl suffered a fainting spell in her stroller, and she was attended to by a police officer that got water to take care of her. There were no medical services nearby. A minute later another woman fainted and then another one.

The euphoria was now unleashed and the caravan forced the bars to start the stampede, with all the children in the front row. They passed to one side of and over the small artillery tanks. The little girl in the stroller and the women that fainted disappeared right away. The police and soldiers did not put up resistance.

Both the little girl that fainted and recently opened her eyes, like thousands of others, thought that they were entering Mexico. Many shouted happily, but the joy didn’t last very long because the road ahead was closed.

The Mexicana police had placed some barriers to control the caravan; the migrants forced a bar and then faced a first ring of anti-riot Federal Police and then a tear gas bomb exploded that made the contingent draw back. Those most affected were minors and women. (Some versions indicated that the police reacted to stones the migrants threw that were already in Mexican territory).

After the convulsed arrival, the entry of underage minors and women that were left under the protection of more immigration authorities began. As Mexican immigration authorities had announced, the reception of all the people began under strict migratory control, prioritizing the minors, with which a good part of the Caravan stayed stranded on the Suchiate River. In addition, it was established that the la caravan would enter only under the supervision of the National Migration Institute (INM) and in this case, of the police.

This Saturday, the migrants will be moved in buses to different shelters in the city of Tapachula, Chiapas.

But the path to the United States is still a long one. And the caravan is not even in Mexico.

← EZLN: Declaration from the 2nd National Assembly of the CNI-CIG
Join us for Waffles and Zapatismo →

One Comment on “Migrant caravan breaks through Mexico’s fence”