EZLN: Declaration from the 2nd National Assembly of the CNI-CIG 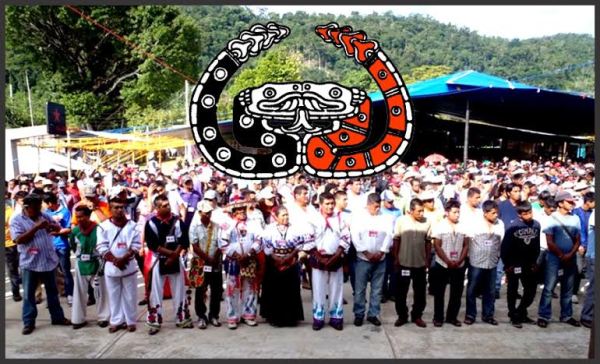 To the Support Networks of the Indigenous Governing Council:

To the peoples of Mexico and the world:

From the Second Plenary Assembly of the National Indigenous Congress (CNI) and the Indigenous Governing Council (CIG), held October 11-14 at the CIDECI-UNITIERRA, San Cristóbal de las Casas, Chiapas, we respectfully address the compañer@s of the CIG Support Networks as well as the peoples of this country and the world in order to discuss and together take new steps toward the construction of the new world that we all need.

We bring you this urgent message because as original peoples our struggle against the profound sickness caused by capitalism means that we must weave life—this is the task given to us by our ancestors. With hope based in memory and in times to come, we sow and grow life everywhere we can, weaving ourselves collectively as a people and thereby weaving ourselves also as persons.

We form a network through each of our locations where we seek to create a collective voice that serves as a mirror for the life and heartbeat of our mother earth. We form a network of networks through the collectives of collectives that are our communities and regions where we seek to create another collective voice, which we listen to attentively. This voice continues to represent what we have freely decided to be; it represents our permanent struggle and the collective agreement that emerges from our differences. Thus we respect and honor this voice, making it our government not just for today but for always. It is from our differences that we become one as the peoples that we are; that is why we honor our differences.

When we agreed during the Fifth National Indigenous Congress to form the Indigenous Governing Council, we did so decisively, without any pretense, without any intent to homogenize, and without any desire to tell anyone what to do, but rather to tell the world that it is not true that government is by nature a destructive force; it should be a constructive force. It isn’t true that government must be a self-serving entity; rather, it must serve its people. Government does not have to be a lie that erases our voice and claims to act in our name as it creates death out of everything it touches; rather, it must be a mirror of what we are when together we dream and decide our destiny.

What we are weaving is organization: the territory we defend, the language we speak and refuse to lose, the identity we do not forget and which we grow through our struggle. But all of these things are also what the owners of money need—things they will destroy in the process of converting them into more money, things they will commodify through exploitation, poverty, sickness, and the death of many millions of people, not just our peoples but also others who live in the cities and countryside. In other words, it is also not true that repression, displacement, disrespect, and death are only happening to us as original peoples.

This is why the exercise of autonomy, using our ancestral ways of walking by asking questions, is the only way to continue to construct life—our unwavering and inalienable path—because outside of that, everything has been put into place to guarantee profits for the powerful and terror for everyone else. Even if their corrupt laws recognized our collective self-determination, it’s impossible to stop or even slow the process of destruction and capitalist accumulation based on our extermination. Putting a stop to that destruction and extermination will only be possible when we dismantle the plantation, the factory, the concentration camp or cemetery that this country and this world have become.

The Indigenous Governing Council is a way to honor our differences, to seek a voice that reflects what we are, and this makes it a true government. The other option, what from above they call the Mexican State, is just a lie created to impose, repress, and hide the death that now overwhelms us and exposes their deceit. That State is nothing but a band of thieves pretending to be an institution, whether from the right or the left. In any case, they bring war with them however they might try to disguise it, and it is also now out of their hands too because after all, the boss is the boss.

But here below we must defend life, regardless of the lies told by the outgoing or incoming government. Because lies abound with regard to the threats to the Binniza, Chontal, Ikoots, Mixe, Zoque, Nahua and Popoluca peoples of the Isthmus of Tehuantepec brought by the trans-isthmus projects and the expansion of the Special Economic Zones, the threats to the Mayan peoples brought by the capitalist train project that will displace and destroy everything on its path, and the threats to all those who will be affected by the announced plan to plant a million hectares in the south of the country with trees for fruit and lumber production. Lies abound in the illegal and rigged referendum on the construction of the New Mexico City Airport and in the invitation to mining companies to continue to invest in the massive expanses of indigenous territories already conferred them. Lies abound in the incoming administration’s creation—without any consultation with our peoples and via old-fashioned indigenismo—of a National Institute of Indigenous Peoples, led precisely by the deserters of our long struggle of resistance.

Lies abound when the peoples of Mexico are cynically subordinated to the interests of the United States via the Free Trade Agreement that López Obrador has already pledged to ratify. López Obrador stated in one of his first declarations that he would not stray from the current monetary and fiscal policy—neoliberal policy, that is—backing that with a pledge to keep the army in the streets and plans to recruit 50,000 young people into the armed forces, which have functioned only to repress, displace, and sow terror across the nation.

When we tried to stop this war and gain recognition of the rights of the indigenous peoples in the Mexican Constitution via the San Andrés Accords, we were betrayed. The real boss, the one we don’t see and who actually rules over those who claim to govern, ordered the imposition of a series of laws that legalized the violent theft of our lands, established programs to divide us and pit us against each other, and sowed discrimination and racism across the country. Thus there is also no end to the lies in their shameless claims that they will recognize the San Andrés Accords or our self-determination within their rotten laws, without ever touching the murderous capitalist farce that is the Mexican State.

To approve the San Andrés Accords in the current context—that is, without reversing the successive reforms to Constitutional Article 27 (reforms that transformed our lands into commodities and put the natural wealth of the earth in the hands of large corporations); without terminating the extensive regime of mining concessions as well as those applying to water, oil and gas, and natural resources; without limiting imperialist power by repealing the current [North American] Free Trade Agreement and severely limiting the power of transnational corporations; without wresting control over our territories from organized crime cartels supported by the armed forces—in this context such an approval would be, in the very best of cases, a crude illusion that would mask money’s assault on our peoples.

As the National Indigenous Congress-Indigenous Governing Council, we have no illusions and will have no part in any exponential capitalist transformation that has its sights set on and its foul tactics aimed at our territories. We will not take part in a lie that is thirsty for our blood and our extermination.

For all of the above reasons we agree to continue to build the kind of organization that becomes self-government, autonomous and in rebellion. We will do this with compañeras and compañeros from other geographies in order to collectively break through the inertia imposed upon us and understand together where the storm comes from. In this midst of that storm we will not cease to weave something else, continuing until our something else is woven into that of others and emerges in every corner of Mexico and the world, forming councils in every location so that we become, together with the CIG support networks, a governing council. For this task, compañer@s, double down in your efforts to organize, according to your own ways and identities, across the cities and the countryside with no regard for borders.

We have agreed to consult our communities, peoples, nations, tribes, and barrios on the ways and methods by which we can, together with the networks of networks, both large and small, build our coordination in a way that enriches us in solidarity and support and makes our differences our strength, as networks of resistance and rebellion with a voice that makes us one, in a respectful and horizontal manner.

As is our way, each step we take will depend on what we decide below, and therefore we will take these resolutions to each of our regions to be agreed upon and to let the collective voice that makes us what we are set the rhythm, the way, and the path.

Our steps will also depend on what is collectively decided below by others—teachers, students, women, workers of the countryside and city, all those who in the midst of this capitalist war have also decided to weave organization that brings down the death and destruction in which the capitalists see profits. If that is your decision, autonomous and from below, then we call upon you to hold serious and committed discussions within your organizations and collectives as to whether it is necessary or not for you to form your Governing Council.

If that is what you decide, with respect to our call to make the earth tremble with organization from below and to the left, you will always be able to count on our selfless accompaniment, word, and solidarity. Compañer@s, the path will be neither easy nor fast, but we are convinced that it will give birth to deep cracks in the structure of power from above.

At the appropriate time and in accordance with the consultation that we will hold in our communities, the CNI-CIG will discuss incorporation into something larger that is capable of bringing together our struggles, thoughts, and identities—something larger that is stronger because of each of our visions, ways, times and methods.

Sisters and brothers, this is our collective word, which continues to call for organization from below to defend life and to heal ourselves together with our mother earth.

For the Full Reconstitution of Our Peoples

Never Again a Mexico Without Us