Posted on May 15, 2018 by Chiapas Support Committee 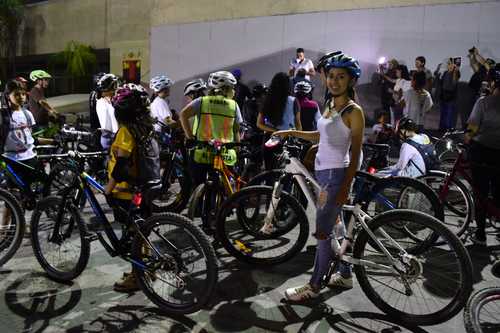 Cyclists from various parts of the world held an event in San Cristóbal de Las Casas as a homage and to protest the murder of the two tourists that were traveling on their bikes a few weeks ago. Photo: Óscar León

The body of one of the European cyclists found dead near kilometer 158 of the San Cristóbal – Ocosingo highway, had been chopped, a version that the state authority rejected this Saturday.

According to Juanjo Gutiérrez, who identified himself as a friend of a Mexican journalist that contacted the Polish cyclist Krzysztof Chmielewsk, affirmed that the body was indeed mutilated.

He had his first contact with the Pole in Huatulco, Oaxaca last April 8. One week later, Chmielewsk arrived in Tuxtla Gutiérrez where he offered a conference in which he talked about his travel through 51 countries, to later depart for San Cristóbal de Las Casas.

The Polish cyclist used a cell phone without a chip (SIM card) and his only form of communication was through Facebook, where he announced the details of his trips and was only connected to the Internet at points with open networks.

On April 29, the disappearance of the German cyclist Holger Franz Hagenbusch, who also was seen for the last time in San Cristóbal, was reported.

That same day it was reported in the local media that on the night of April 26 they had located the cadaver of a cyclist, referring to the Pole, a situation that awakened the curiosity of the Mexican journalist, who went to investigate if it was he.

They did not find identification or the Go Pro camera with which he recorded his journeys on the body. It was in a state of putrefaction. In the process of recognition, the prosecutor Pablo Liévano assured that the cyclist’s death was due to an accident.

Gutiérrez and his journalist friend (who he did not name) went to Ocosingo to try to recognize the cadaver and they realized, through photographs shown by forensic experts, that the body had no head; they were only able to appreciate chunks of bone from the neck.

The responsible authority told them that the skull was torn apart during the fall, despite the fact that the rest of the body was without injuries. Although the body, according to the prosecutor, “fell freely into that ravine,” the guts didn’t explode. Its internal organs were in a perfect state of preservation; but he did lack a foot, which seemed to have been cut off; the authority maintained that wildlife ate it.

The bicycle found together with the cadaver that is apparently Chmielewsk does not belong to the Pole, but rather to Holger Franz Hagenbusch. The authority said that perhaps they exchanged bicycles on the route. Both had met each other in San Cristóbal and decided to travel together to Palenque.

On Friday, May 4, Liévano announced the finding of a second cadaver, 200 meters further down from where the first one was found. He’s talking about the body of Hagenbusch. The German’s body had a hole in the skull produced by a shot.

On May 10, the German newspaper Frankfurter Allgemeine Zeitung published statements of Rainer Hagenbush, the cyclist’s brother, that the Pole had been “decapitated.” This Saturday, prosecutor Luis Alberto Sánchez, the one responsible for the investigation, rejected this version.