The CIG: results of the irreverence 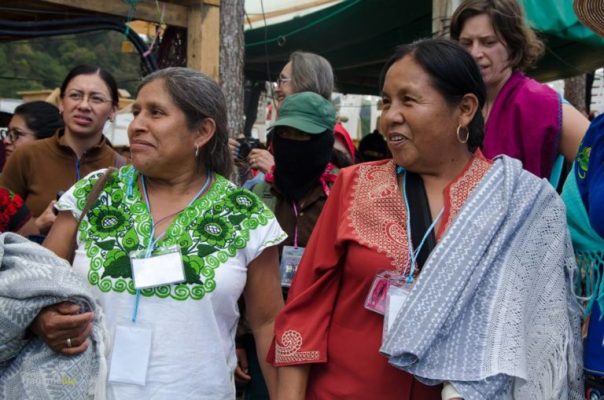 Marichuy at the 2018 Zapatista Women’s Gathering in Morelia, Chiapas.

On February 19 the time period expired for turning in (INE) the signatures of citizens that supported the initiative of the Indigenous Government (CIG, its initials in Spanish) to the National Electoral Institute (INE). In its latest public report, the INE realizes that 266, 114 people signed so that the CIG’s spokeswoman, María de Jesús Patricio Martínez, would appear as an independent candidate to the Presidency of Mexico on the electoral ballots next July. Said report also indicates that more than 92 percent of the signatures received for Marichuy –as the spokeswoman is affectionately called– are real, legal and legitimate.

In different spaces an evaluation of what this stage meant for Mexican society has begun to be elaborated. The voices that classify the los initiative’s results as a “failure” would do well in learning to listen, a difficult but necessary quality, especially in times in which the noise and the disinformation are constant.

The evaluation of this stage necessarily must be given on several levels: at the internal level of the CIG and of the National Indigenous Congress (CNI), on the repercussions of the process on regional, state, national and international levels; on the internal and external factors that influenced the process and on the results, on the articulation and dialogue with different sectors and social organizations, on the ties woven between the struggles of the countryside and the struggles of the city, etcetera. Here we reflect on some of these points.

In October 2016, when the EZLN presented the proposal and the CNI made it theirs, the diagnosis was very clear: the capitalist war, that old acquaintance of the original peoples, had reached all corners of the country. Faced with such a situation, the pains of the original peoples remained as “one more among many others.” The light of the CNI was extinguished, and not because the peoples that belong to it were surrendering, but rather because the dispossession, contempt, exploitation and repression that they receive from those above were disappearing. It was time to go on the offensive, and the Council would be something like a Trojan Horse.

Today, 17 months later, the CNI not only continues existing, but also grew quantitatively and qualitatively. Hundreds of collectives, organizations, barrios, tribes, nations and original peoples responded to the call.

The Council talked, listened and embraced other pains. It dialogued with sectors from the countryside and the city, with young people, with women, with families of victims of femicide, of disappearance and of assassination; with migrants and also with organizations of men and women workers hombres. In a country perforated by mines and clandestine graves, with morale undone and normalized violence, the Council not only made the problems of the indigenous and non-indigenous visible, but also summoned us to a “combative re-organization.”

The national and international press served to draw the attention of thousand of people in Mexico and the world to the reality of our country. Many people observed how it went from “they do this to us” to “we’re going to do something.” Protest acquired the face of proposal, and more than one decided to come out of their “glass house” and support the initiative. In some of the more conservative local newspapers columns appeared that called to sign for Marichuy, while the international press sent its correspondents to document what was happening. The original peoples of Mexico, supported by thousands of individuals, were once again in the press, not because of folklore or because of a tourism invitation, but rather because they had the irreverence to talk about organization, self-government and anti-capitalism in a sphere that was almost rude. No one will be able to hide the echo that Council’s proposal had in the country and in the entire world.

In the cities, people of all ages joined the support networks: without money and with a lot of creativity, they set up tables for the collection of signatures, designed their own signs and flyers, and they went out and talked to other people like them. Many neighbors met each other for the first time, met talking about local problems, about expectations for 2018, about the discredited political class, about being fed up and about the despair.

A new generation of young anticapitalist militants was also born. The majority of them participated for the first time in a process of this scope. Others, also for the first time, negotiated or used their electoral credential. Among the millennial generation, the one that has been so vilified, the idea grew that another world is possible. Not only did they go to their schools or a their barrios to organize, but they also studied to become anti-capitalists and they also understood that much of the violence that they experience on a daily basis is not a private thing, but that machismo, patriarchy and racism are also pillars that maintain this system.

As if that were not enough in a country where the “institutional left” can no longer b distinguished from the right, where political discussion places corruption and transparency at the center of the “debate”; the Council talked about structural problems, about economic models, about the violence… the uncomfortable themes, those that are not touched above because they don’t sell and don’t generate votes, were made visible.

In November 2016, Subcomandantes Moisés and Galeano wrote that the initiative would not only signify a “testimony of non-conformity, but also a challenge that surely would find an echo in the many belows that there are in Mexico.” They also noted that what mattered “was the challenge, the irreverence, the lack of submission, the total break with the image of the indigenous object of charity and pity.” And that’s how it was. The CIG listened to the pains and wove rages that the resistances now utilize.

The metaphor of the “old mole” has often been used to describe what, like that little animal, advances underground, with patience and treasured wisdom, and that, at the least expected moment, irrupts towards the ground. Perhaps that is a good metaphor for describing what the CNI has done: with the wisdom of more than 500 years, many times resisting without being seen, had a presence where no one expected. In their irruption, they met others that also want to construct a world with liberty, justice and dignity. I have not the slightest doubt, the result of the irreverence is quite positive.

← A very special day
Join us for Waffles & Zapatismo →