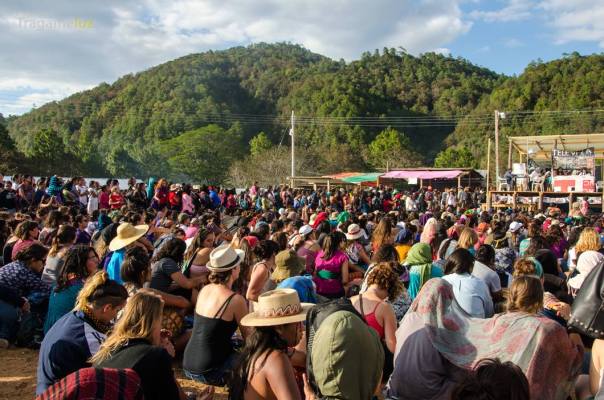 Women at the International Zapatista Gathering of Women that Struggle in the Caracol of Morelia, Chiapas, Mexico.

It was a very special day. They made it special.

There was the usual: the display of flowers, supplements and special programs, promises of change, the language of quotas, commercial banality… But the call for a women’s strike, which in Spain involved 6 million of them and extended everywhere, was a clear symptom of a point of flexion in the celebration of International Women’s Day. Its explicit, anticapitalist and anti-patriarchal message reflected the form in which women have been recuperating the historic meaning and radical nature of March 8.

It’s not a swallow, but rather the arrival of summer. It’s not an event, but rather a process. As Magdalena León, an Ecuadorian economist, remarked with vigor: “so far in this century feminist thought and action have accumulated novel experiences, searches, organizational fabric, ways of interpreting reality, resistances, proposals integral to ‘changing the world.’” They have made clear to what extent many discourses and postures that propose the inclusion of women without altering structural conditions can be used as “a guaranty of continuity and armoring the system.” The reach and complexity of the celebration “doesn’t stop being in dispute, but now with a clear hegemony of anticapitalist and anti-patriarchal feminism.” (https://www.alainet.org/es/articulo/ 191507).

“We must talk about feminisms in the plural,” observes Veronica Gago, a well-known Argentine author, very active in #Ni una menos (Not one less). Although feminist struggles are global, those of Latin America have gained prominence for the weight of “Villero feminism, community feminism, indigenous feminism and popular feminism,” terms that have “their own history, their genealogy and that share a link with social conflict.” “It’s not a strictly analytical, academic or institutional feminism.” In the current conjuncture, what has emerged is “a radical feminism that takes into account the dimension of struggles and rebellion, by framing the debate about women’s bodies and abortion and, at the same time, connecting these debates within the field of work and making life in general more precarious (insecure). One of the most important contributions of popular feminism is its discourse about the way in which insecurity affects life in social, political and economic terms, and the importance of this discussion in each territory.”

It was really remarkable. Marches everywhere, original and creative initiatives, the entire world shaken by the decision of women to put an up to here with the wave of violence and discrimination that they are suffering and to take a step forward, firm and determined, in their struggle forever. In Mexico, the struggle acquires a special meaning. Seven out of every 12 femicides that are committed each day in Latin America Latina take place in Mexico. The aggression is brutal and is accompanied by all forms of violence and exclusion.

One hundred years of feminist struggle have generated all sorts of changes in the laws and in reality, but the oppression is maintained. The woman receives less than the man in all categories. And it’s clear, now more than ever, that in capitalist society the woman will always be the second sex; that their struggle for liberation is the struggle to get rid of a regime that is the ultimate, the most violent, the most racist, the most sexist expression of ancestral patriarchy.

It was everywhere… but only in Chiapas was an international gathering held. Convoked by the Zapatistas, more than 2 thousand women, from 38 countries and from all over the Republic met in the Whirlwind of Our Words Caracol, in Morelia. It was the gathering of women that struggle.

Insurgent Captain Erika read what they conceived collectively in the inauguration of the gathering (encuentro), which quickly came into effervescence. The work groups, the rituals, the reflection and the fiesta multiplied. The tone was clear. It was time to say enough! and to resume the tradition of struggle. Someone remembered March 8, 1857, when 120 women died due to police repression of their march, which a couple of years later would flow into the first women’s union in the United States. They also mentioned the march of women socialists in New York in 1909 and especially that of March 8, 1917 in Petrograd, then the capital of Russia, in a mobilization that was the signal and starting point of the revolution.

It will be a long time before we know in detail what happened between March 8 and 11 in the Caracol of Morelia, how the whirlwind of words became the hurricane, how the light that was turned on in the Caracol will light all the corners of the world. For now we only know about the agreement. It’s about “living, and how for us (women) living is struggling, because we agree to struggle each one according to her way, her place and her Time.”

← Zapatista Captain calls on women to “struggle together against the patriarchal capitalist system”
The CIG: results of the irreverence →