7,000 displaced due to violence in Chiapas

VIOLENCE AND DISPLACEMENTS ESCALATE DUE TO THE CONFLICT IN CHIAPAS 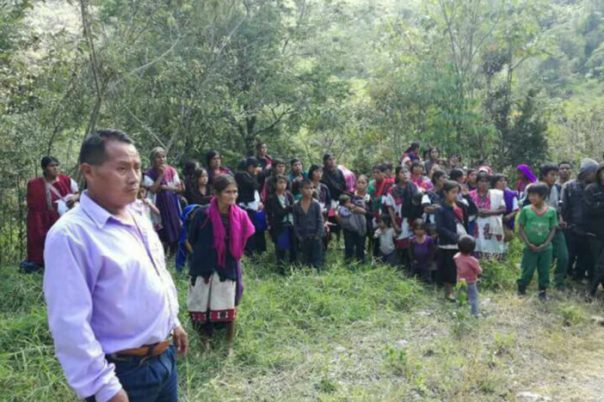 Those displaced from Chalchihuitán, Chiapas. Photo from Proceso.

A Special Report by: Isaín Mandujano

The director of the Fray Bartolomé de las Casas Human Rights Center (Frayba), Pedro Faro, warned that another massacre like Acteal could occur in the Los Altos region of Chiapas if the federal government doesn’t disarm the civilian armed groups or paramilitaries that have already left hundreds displaced from Chenalhó and Chalchihuitán.

In an interview, Faro said today that this conflict between Chenalhó and Chalchihuitán, which dates from more than 40 years ago, has sharpened because of state and federal governments’ omissions to definitively resolve this agrarian and territorial dispute.

Then he exposed that both the state and federal governments propitiated this conflict through their agrarian bodies, upon emitting resolutions “from the desk.”

“The problem that we see right now, and since the July 2015 municipal elections, is that civilian armed groups have been created again. As they never investigated the paramilitary groups and as the paramilitaries in the region were never disarmed, now it is clearly seen that they can easily re-arm, or re-group for, like in this case, attacking the indigenous of Chalchihuitán”, warned Faro.

And he added that: “populations of the municipality of Chenalhó have also been affected in this dispute, who nothing to do with this conflict.”

What the Frayba has documented is that last year there was an inter-institutional group or commission that proposed a solution to this conflict to the state government, but the government has not complied with the agreements. They are: reparation of the damage, indemnify the people affected, and marking off of the territorial limits, as well as other actions.

In this conflict, he clarified, there is nothing new or obscure, “what’s dark around here is that once again the armed groups that are attacking, displacing and killing people have been reactivated.”

“It is not known what interests there are so that that zone becomes a war zone; our explanation, as far as we can see, is that a climate of impunity has been created since the Acteal Massacre, wherein actors that are tied to the government act unpunished and do whatever they want in the zone. There is not, then, the Rule of Law in this region,” he denounced.

“The information that reaches us is that they are purchasing weapons, that they are re-organizing, that they are besieging and generating terror in the communities, and that situation has now left thousands of displaced persons, not only from Chalchihuitán, but also from Chenalhó, because of this very same conflict.

The risk now, he added, is that the murders start to escalate and another massacre is perpetrated. “Because the only thing that the government has announced is the creation of a Base of Mixed Operations made up of police and military bodies from the state and federal governments, similar to what there was close to the Acteal Massacre in 1997, and it never prevented avoiding the multi-homicide.”

Faro asked that, in order to end the conflict, the community agreements that the traditional authorities of both municipalities already have be re-established, that the murders that have remained unpunished be investigated, and that the armed paramilitary groups that operate in the zone be investigated, disarmed and dismantled.

In a communiqué, the Frayba maintained that the life, security and integrity of entire communities in the region is at risk.

Later he emphasized that the death of Samuel Pérez Luna occurred in October. Pérez Luna was a resident of Chalchihuitán and a native of Kanalumtik community. The violence deepened on Monday the 13th, caused by armed groups in the region.

That’s why hundreds of families have left the region, taking refuge in the mountains. He stated that armed groups even cut off the highway and blocked all access to communities in Chalchihuitán municipality, leaving the population incommunicado.

“As of today they continue firing bullets, the population is living in terror, there are rumors that armed people are going to enter to attack the people that are in the capital of Chalchihuitán. There is nothing to eat, no beans or tortillas. The state government doesn’t listen because it hasn’t done anything; we are alone and abandoned to our fate. All the businesses are closed and there is no longer any corn, fruit or gasoline. The municipality is under siege and there is no way to get food supplies; there is a lot of fear, there is shooting in the Pom community and at least nine house have been burned down. There are also threats of cutting off the electricity,” the Frayba report emphasizes.

The Frayba report lists 32 communities that are at greatest risk and states that approximately 7,000 people are affected by the violence.

Therefore, the Frayba urged the Mexican State to take care of this situation quickly and expeditiously that because the violence has become widespread and can lead to greater human rights violations, “since we have precise information that the actions implemented by Manuel Velasco’s government officials have been inefficient and have generated a greater mayor risk to the population.”

The NGO asked that the necessary precautionary measures be implemented with urgency and pertinent to respecting, guarantying and protecting the life and integrity of the families in Chalchihuitán and Chenalhó.

Likewise, he asked that the “UN’s rector principles for internal displacements be applied,” for the purpose of protecting the hundreds of families that have fled the generalized violence and that are completely vulnerable.

He also asked that the murder of Samuel Pérez Luna be investigated, those responsible punished and that the armed groups that act with impunity and with the permissiveness of the Chiapas be disarmed.

But, above all, that free transit and social peace is guaranteed in the communities of Chalchihuitán and Chenalhó municipalities, prioritizing dialogue among the parties with essential respect for human rights.

2 Comments on “7,000 displaced due to violence in Chiapas”