The Indigenous confront an economic model based on dispossession 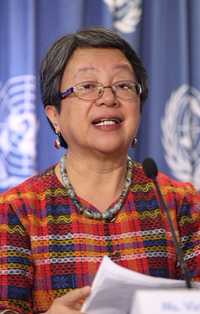 The original peoples in Mexico and in other parts of the world confront an economic model based on the forced dispossession and occupation of their territories, with the objective that their natural resources will be used as the basis for a development that doesn’t benefit them, which is not very different from the colonial system that existed two or three centuries ago.

That’s how Victoria Tauli-Corpuz, the special relator on indigenous rights from the United Nations affirmed it; she emphasized that although the scheme is practically the same on a global scale, the native communities in Mexico face a climate of violence and impunity even greater than exists in other regions.

After concluding her visit to Mexico, from November 8 through 17, in which she toured the states of Chiapas, Guerrero and Chihuahua, the advisor and activist of Philippine origin spoke with La Jornada about her findings and concerns, as well as about the form in which she thinks that the governments can cover the historic debt they have with the native communities.

–How do the mega-projects affect the indigenous peoples?

–The communities are rich in natural resources, such as forests, minerals or biodiversity, and the governments see those resources as the basis of national development. So they go to the communities and extract what’s there, but they don’t help the people to live in the way that seems good to them. They just leave environmental destruction that mining and the extraction of oil and gas generate, but without rehabilitating their lands and waters.

“Of course, the indigenous peoples wish that they at least be consulted and that there is a negotiation. When they resist, there is where violence occurs, because the soldiers or corporate security guards treat them badly and even displace them from their lands without receiving any compensation or a decent place where they can be relocated.

“If the authorities would listen, they would know that the indigenous peoples are not against development; they just want to be assured that such development brings them benefits, that they can protect their lands and territories, and that they can continue practicing their traditional cultures.”

–How would you describe what’s happening in Mexico, in comparison to what happens in other countries?

–In many senses what’s happening here is similar to what happens in many countries that I have visited, in terms of the situation of indigenous peoples. What is very singular to Mexico are the high levels of impunity, like in the case of massacres about which I have heard and that occur frequently. That is something that I have not seen in other countries.

–Do the indigenous peoples continue confronting schemes of colonialism?

–Definitely! They still confront much of the colonial system because the thinking of the people that have power is only to extract, to occupy their lands and to take out everything they can from them, and that is a type of colonialism, not external, but rather internal.

–Then it’s basically equal to what occurred two or three centuries ago?

–Yes, basically I think so, because the colonizers that wanted to extract everything to enrich themselves are the same as the elites, the rich that do business in the private sector, they extract whatever they can from the communities without their consent and don’t give them anything.

–What do you think about the difference between what the laws in Mexico say and their application in reality?

–Mexico was a leader at the international level so that the United Nations Declaration on indigenous peoples rights would be approved, and that is very good, but that fact that is not reflected in the country is worrisome. It must have a ley especial law that recognizes the indigenous as subjects of public right.

–How should the historic debt with indigenous peoples be paid?

– First of all it must be accepted that there really is an historic debt, and that acceptance can come in the form of an apology, a recognition that things have been done badly, so that afterwards there is a dialogue with the indigenous peoples. It must be accepted that the current model of development is at the root of the conflicts, because the inequality of resources, power and wealth is what prevails in many countries and must be confronted, although that means less wealth and power for those who have always had them.

← Chomsky: impossible for campesinos of Mexico to compete with US agriculture
7,000 displaced due to violence in Chiapas →